When is the birthday of christ?

Egyptians filled their homes with green palm rushes which symbolized for them the triumph of life over death. Early Romans marked the solstice with a feast called the Saturnalia in honor of Saturn, the god of agriculture. The Romans knew that the solstice meant that soon farms and orchards would be green and fruitful. To mark the occasion, they decorated their homes and temples with evergreen boughs. In Northern Europe the mysterious Druids, the priests of the ancient Celts, also decorated their temples with evergreen boughs as a symbol of everlasting life. The fierce Vikings in Scandinavia thought that evergreens were the special plant of the sun god, Balder. Germany is credited with starting the Christmas tree tradition as we now know it in the 16th century when devout Christians brought decorated trees into their homes. Some built Christmas pyramids of wood and decorated them with evergreens and candles if wood was scarce. Decorating evergreen trees had always been a part of the German winter solstice tradition. The first "Christmas trees" explicitly decorated and named after the Christian holiday, appeared in Strasbourg, in Alsace in the beginning of the 17th century. After 1750, Christmas trees began showing up in other parts of Germany, and even more so after 1771, when Johann Wolfgang von Goethe visited Strasbourg and promptly included a Christmas tree is his novel, The Suffering of Young Werther. In the 1820s, the first German immigrants decorated Christmas trees in Pennsylvania. After Germany's Prince Albert married Queen Victoria, he introduced the Christmas tree tradition to England. In 1848, the first American newspaper carried a picture of a Christmas tree and the custom spread to nearly every home in just a few years.
Santa Claus
Even "Santa Claus," a very popular symbol of Christmas in the Western world, has a pagan origin. Santa Claus hasn't always looked like the jolly old fellow we know today. Like so many other American traditions, he's a product of the great American melting pot - a blend of many different cultures and customs. His earliest ancestors date back to pre-Christian days, when sky-riding gods ruled the earth. The mythological characters Odin, Thor, and Saturn gave us the basis for many of Santa's distinctive characteristics. The most influential figure in the shaping of today's generous as loving Santa Claus was a real man. St. Nicholas of Myra (now Turkey), a fourth century bishop. As a champion of children and the needy, he was legendary for his kindness and generosity. Much admired for his piety and kindness, St. Nicholas became the subject of many legends. It is said that he gave away all of his inherited wealth and traveled the countryside helping the poor and sick. Over the course of many years, Nicholas's popularity spread and he became known as the protector of children and sailors. His feast day is celebrated on the anniversary of his death, December 6. This was traditionally considered a lucky day to make large purchases or to get married. By the Renaissance, St. Nicholas was the most popular saint in Europe. Even after the Protestant Reformation, when the veneration of saints began to be discouraged, St. Nicholas maintained a positive reputation, especially in Holland. St. Nicholas made his first inroads into American popular culture towards the end of the 18th century. In December 1773, and again in 1774, a New York newspaper reported that groups of Dutch families had gathered to honor the anniversary of his death. The name Santa Claus evolved from Nick's Dutch nickname, Sinter Klaas, a shortened form of Sint Nikolaas (Dutch for Saint Nicholas). 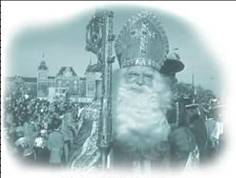 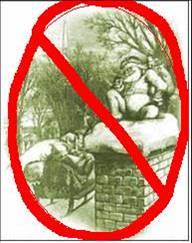 In 1804, John Pintard, a member of the New York Historical Society, distributed woodcuts of St. Nicholas at the society's annual meeting. The background of the engraving contains now-familiar Santa images including stockings filled with toys and fruit hung over a fireplace. In 1822, Clement Clarke Moore, an Episcopal minister, wrote a long Christmas poem for his three daughters entitled, "An Account of a Visit from St. Nicholas." Moore's poem, which he was initially hesitant to publish due to the frivolous nature of its subject, is largely responsible for our modern image of Santa Claus as a "right jolly old elf" with a portly figure and the supernatural ability to ascend a chimney with a mere nod of his head! Some of Santa Claus' characteristics date back many centuries. For example, the belief that Santa enters the house through the chimney developed from an old Norse legend. The Norse believed that the goddess Hertha appeared in the fireplace and brought good luck to the home. (World Book Encyclopedia) Although some of Moore's imagery was probably borrowed from other sources, his poem helped to popularize the now-familiar idea of a Santa Claus who flew from house to house on Christmas Eve—in "a miniature sleigh" led by eight flying reindeer, whom he also named—leaving presents for deserving children. "An Account of a Visit from St. Nicholas," created a new and immediately popular American icon. But the most significant symbolism in this myth is that children are taught that Santa has many of the characteristics that only the Almighty actually has. They are told that Santa "knows if you've been bad or good." Of course, only the Almighty Creator has this attribute of knowing all things. Santa is also believed to be able to travel around the world and visit every home with gifts in one night. This absurdity is only an attempt to make him look omnipotent, capable of doing anything, and omnipresent, being able to all over the world at one time - characteristics which only Elohim possesses. Any Scripture student knows that Satan always wanted to take the Creator's place. And in Santa Claus, he has people adoring him as a god-like being and attributing to him qualities which only Elohim Himself possesses.
Is telling your children that there is a Santa Claus just a cute little joke? Harmless fun? Innocent traditional folklore? Hardly. In fact, telling this tongue in cheek white lie can be a monumental faith destroyer! Children are taught and believe with a great deal of trust, faith and emotion that Santa is ‘godlike,’ only one day to have their dreams and hopes dashed and their trust in those who fooled them shaken. (Many of us still remember how hurt we felt when we learned he isn’t real). Teaching the myth of Santa does great damage to our children’s belief in the real things we tell them about Yah, the Creator. They learn a bitter lesson which drives them to cynicism. And they learn to hold in suspicion whatever their parents say. By playing the game and telling our kids there is a Santa Claus, we undermine our own integrity and trustworthiness. It's no wonder that when they become teenagers, they no longer want to listen to the advise of their parents, whom they have learned to distrust and disbelieve because they have a history of lieing to their children! The Believer's Response to the Pagan Elements of Christmas
How should the person who has placed his faith in the Elohim of the Bible respond to these pagan customs,

Report of my experiences with a tropical medicine expedition for healthcare professionals in Tanzania, 2009 Arthur Dover, MD, DTMH In my opinion, the training for healthcare providers in the areas of clinical tropical medicine and travelers health in non-tropical countries has yet to reach an adequate standard. Each year, more and more tourists choose travel destinations in tropical a