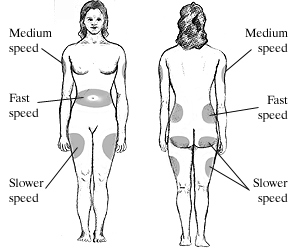 Long-acting insulin (Basal insulin), also called Ultralente, starts to work in six to
10 hours and can stay in the body for 20 hours or more. It has a peak, but its top
speed looks a lot like its normal speed. Long-acting insulin is usually taken in the
morning or before bed, like intermediate-acting insulin.
Ultra-long-acting insulin called glargine (GLAR-jeen) insulin is injected once a
day. This is very long-acting insulin. It starts to lower blood glucose levels about 1
hour after injection, and keeps working evenly for 24 hours without any peaks.
Insulin mixtures (Mixture Insulin) - There may be advantages of using insulin
mixtures. They are a combination of rapid-acting insulin with long-acting insulin. i.e.
a mix of both basal and mealtime insulins in one solution. Humalog® Mix75/25™
(75% insulin lispro protamine suspension, 25% insulin lispro injection [rDNA origin])
and Humalog® Mix50/50™ (50% insulin lispro protamine suspension, 50% insulin
lispro injection [rDNA origin]) are Mixture Insulins. These are used primarily by
people with type 2 diabetes.
All insulins come dissolved or suspended in liquid; the most commonly used strength is U-100, which means there are 100 units of insulin per ml. Insulin can be injected into several places on the human body. Insulin injected near the stomach works fastest. Insulin injected into the thigh works slowest and a shot in the arm works at medium speed. These are good sites to administer insulin shots. How to store Insulin? (Advice to patients) If you use a whole bottle of insulin within 30 days, keep that bottle of insulin at room temperature. On the label write the date that is 30 days away. That date is when you should throw out the bottle with any insulin left in it. If you don't use a whole bottle within thirty days then you should store it in the refrigerator all of the time. If insulin gets too hot or too cold, it doesn't work right. So, don't keep insulin in the freezer or in the glove compartment of your car during warm weather. Keep at least one extra bottle of insulin around your house. Store extra insulin in the refrigerator. Brand Name
Duration
Comments
compensate for the sugar intake from food Usually used in combination with a faster-acting insulin to provide proper control at mealtimes concentration over Injected once daily at bedtime 24 hours

www.injex.com
www.injex.de
Once you have gone through the above study module please do the following: 1. Prepare a data like the one given on page 5 mentioning the type, brand name and manufacturer’s name of insulin that are available in your market. 2. Provide the list of various containments of insulin available; like whether it is 3. Do open a Skype account as soon as possible. 4. Also ask all your sales personnel to open a Skype account. 6. Do feel free to contact us, should you require any further assistance. Thanking you in advance for your co-operation. Skype ID: eswar.injex

Yorkshire and the Humber Specialised Commissionning Group Board Meeting - 24th September 2010 Decision Summary for PCT Boards 1. Policies: General Commissioning Policies for Medicines and Treatments The following four policies were approved for adoption by the SCG:- Imatinib for the adjuvant treatment of gastrointestinal stromal tumours - To be not routinely funde