A Signal Processing Tool Based on the Continuous Wavelet for the
Simultaneous Determination of Estradiol Valerate and
Cyproterone Acetate in their Mixtures
ERDAL DINÇ1*, FATIH KAS 1, DUMITRU BALEANU2,3,4
1Ankara University, Faculty of Pharmacy, Department of Analytical Chemistry, 06100 Tandogan, Ankara, Turkey
2 Çankaya University, Faculty of Arts and Sciences, Department of Mathematics and Computer Science, 06530 Balgat,Ankara,Turkey
3 Institute of Space Sciences, Magurele-Bucharest, P.O. Box, MG-23, R 76911, Romania
4 Faculty of Engineering,King Abdulaziz University, Department of Chemical and Materials Engineering,P.O. Box: 80204, Jeddah,
21589,Saudi Arabia
A signal processing tool based on the continuous wavelet transform (CWT) was proposed for the simultaneousdetermination of estradiol valerate (EV) and cyproterone acetate (CA) in their mixtures. Different continuouswavelet families were tested in order to find the optimum family of the wavelets. The Symlets 8 continuouswavelet transform (SYM8-CWT) was observed to be the optimal one. The SYM8-CWT approach was appliedto the absorption spectra of the related compounds in the spectral range of 210.00-312.35 nm for thecalibration solutions of the compounds in the concentration range of 10-50 µg/mL for EV and 5-30 µg/mL forCA. The calibration equations for EA and CA were computed by measuring the continuous wavelet signals at260.75 nm and 238.40 nm, respectively. The proposed method was validated by the independent analysis ofthe synthetic mixtures and by the standard addition technique. It was observed that the selectivity and thesensitivity in the application of the db5-CWT method to the determination of EV and CA compounds weresatisfactory Keywords: Continuous wavelet transforms, simultaneous determination, estradiol valerate, cyproteroneacetate, binary mixture Combination of estradiol valerate (EV) with cyproterone In this manuscript, a new signal processing method acetate (CA) is used in hormone replacement therapy based on the combined use of CWT with zero-crossing during climacterium. Estradiol valerate and cyproterone technique was proposed for the simultaneous acetate are completely absorbed after oral administration.
determination of EV and CA in mixtures and in During the absorption process and the first liver passage, commercially formulation. The proposed SYM8-CWT estradiol valerate but not cyproterone acetate is extensively method was validated by analyzing the synthetic mixtures metabolised. Despite complete absorption and ester of EV and CA and by using the standard addition technique.
hydrolysis of estradiol valerate only 3% of the dose is Good agreements for the determination results for the bioavailable as estradiol after oral administration.
Cyproterone acetate is completely bioavailable after oraladministration. During the absorption process and the first Experimental part
liver passage estradiol valerate is rapidly hydrolysed to 17beta-estradiol and valeric acid. Cyproterone acetate is mainly metabolised to 15beta-OH cyproterone acetate, a Wavelet method become ver y powerful in many pharmacologically active metabolite with similar high branches of science and engineering [12-13].Wavelet antiandrogenic but much lower progestogenic activity as method is devoted to analyze the signal in time-frequency scale and it is useful in non-stationary signals analysis. In Ratio derivative spectrophotometric and chemometric the last decade, the huge potential application of this methods for the simultaneous quantitative analysis of the powerful technique in chemistry especially in combination commercial preparation samples containing EA and CA to other methods leads us to a conclusion that the wavelet were recently developed [2]. On the other hand, several method becomes a powerful technique for the quantitative analytical methods including spectrophotometry [3-5], determination of compounds in samples.
HPLC [6,7], fluorimetry [8] and radioimmunoassay [9] In the following we consider a wavelet family denoted were devoted for the determination of EV and CA in by ∅ (λ) [12-13]. By making scaling and shifting of ∅ (λ) pharmaceutical preparations as well as in the biological we immediately obtain a set of functions denoted as ∅ liquids. In addition, derivative spectrophotometric method for determination of estradiol valerate in tablets wasreported [10]. Electrochemical sensor highly selective forestradiol valerate determination based on a modified carbon paste with iron tetrapyridinoporphyrazine wasdiscussed in [11].
where a represents the scale parameter, b denotes the Recently, wavelet transform method is a power full tool translation parameter and R is the domain of real numbers.
for the spectral quantitative analysis of the multi- Let’s consider a signal f(λ) ∈ L (R), and define the * email: dinc[email protected]; Tel: +90-0312-215-4886 REV. CHIM. (Bucharest) ♦ 64♦ No. 2 ♦ 2013 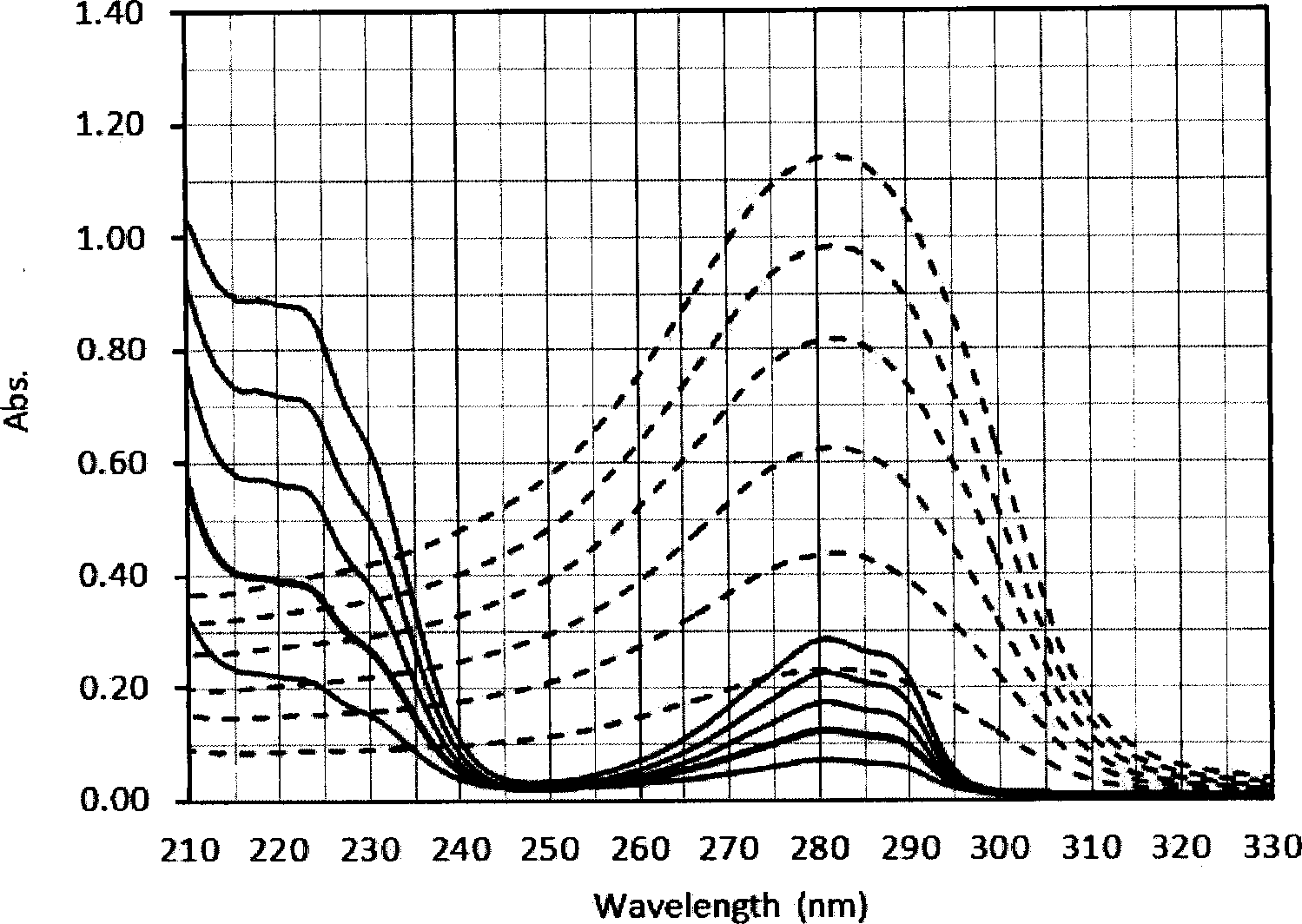 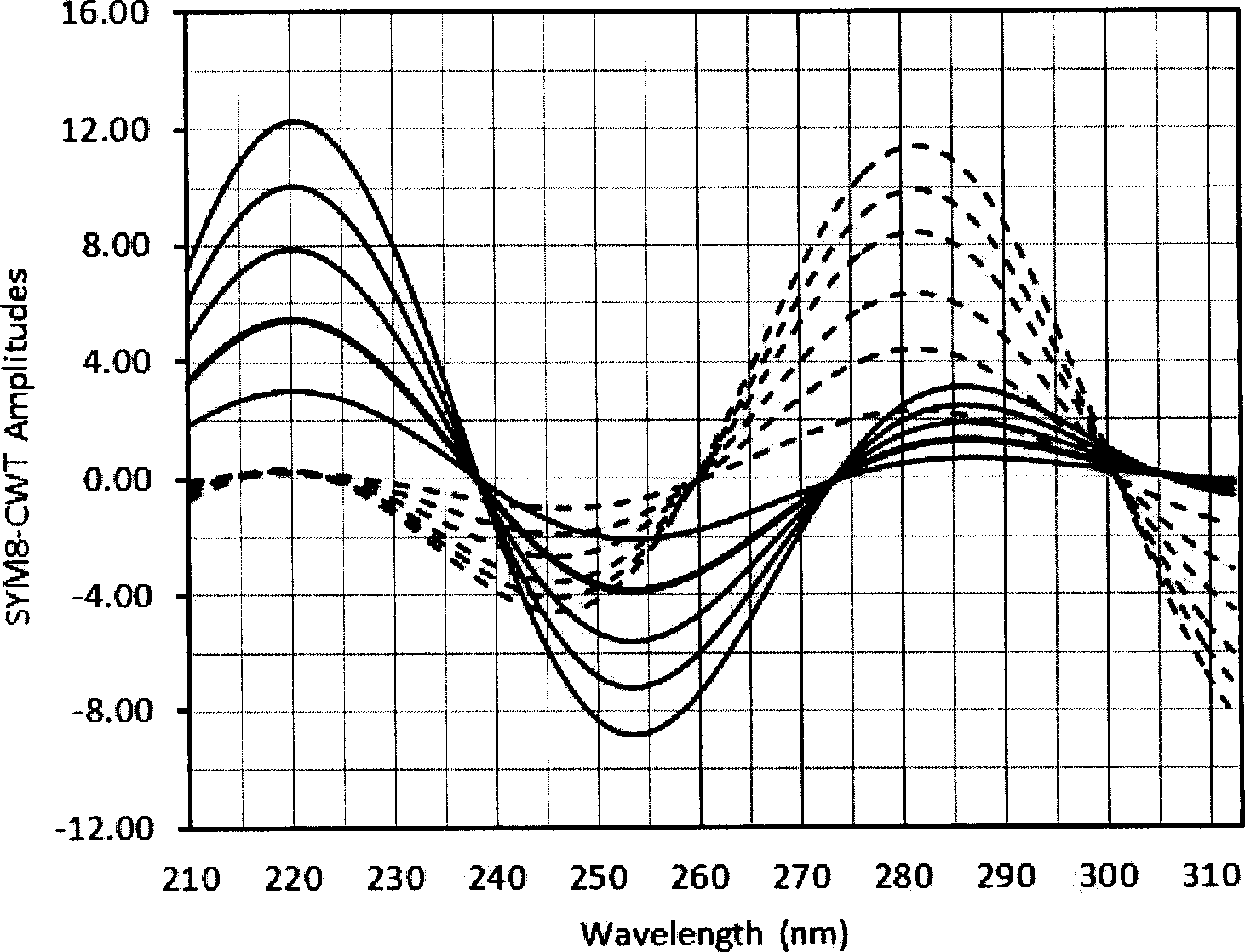 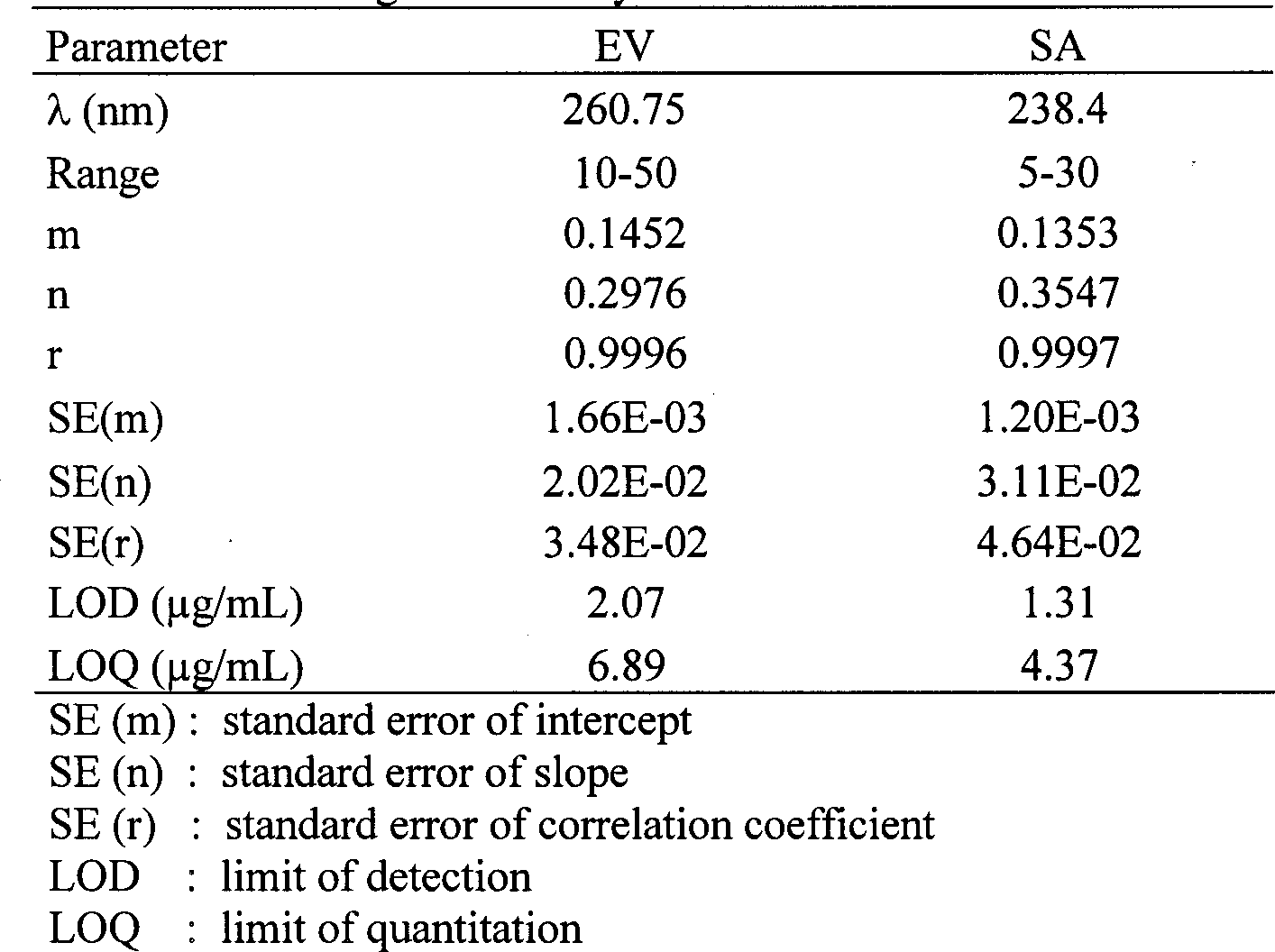 LINEAR REGRESSION ANALYSIS AND STATISTICAL RESULTS Fig. 1. UV absorption spectra of EA (——) and CA (- - - -) in the range of 10-50 μg/mL and 5-30 μg/mL in methanol A commercial preparation (CLIMEN® Sugar-coated tablet, Bayer Schering Pharma, Turkey) was assayed. Itsdeclared content was as follows: 2.0 mg EV and 1.0 mgCA per tablet. CA and EV were donated by the Turkishnational Pharm. Ind. firms, Turkey.
Results and discussions
The UV absorption spectra of the standard series and samples solutions in the concentration range of 10-50 forEV and 5-30 µg/mL for CA were plotted in the wavelengthrange of 210-330 nm (fig. 1). The UV absorption spectradata corresponding to 210.00-312.35 nm were selected Fig. 2. SYM8-CWT spectra obtained by transformation of the UV and transferred to the wavelet domain. The obtained absorption spectra of EA (——) and CA (- - - -) in the range of 10-50 continuous wavelet signals were applied to all wavelet families available on Wavelet Toolbox in the Matlab 7.0software and the optimal family was retained. As a result SYM8-CWT (a = 1150) was found to be the optimal CWTtool. The obtained wavelet coefficients were plotted versus where the superscript * denotes the complex conjugate wavelengths and then SYM8-CWT spectra were obtained and 〈ψ (λ), f(λ)〉 means the inner product of function as shown in figure 2. The analytical CWT amplitudes at f(λ) onto the wavelet function ψ (λ).
260.75 nm for EV and for CA at 238.40 nm were measured.
Shimadzu UV-2550 UV-Vis double beam spectro- Calibration graphs were calculated by using the linear photometer connected to a computer loaded with regression analysis based on the relationship between their Shimadzu UVProbe was used for all the spectrophoto- CWT peak intensity and concentration. The obtained metric measurements. The absorption data were calibration graphs and their statistical results from linear transformed into to the Excel and was processed by SYM8- regression analysis were presented in table 1. The results CWT. Wavelet toolbox in Matlab 7.0 was used for the show high correlation coefficients (r) and satisfactory slope, intercept, the limit of detection and the limit ofquantitation obtained by the application of the SYM8-CWT with the selected optimal zero crossing points. This SYM8- Solutions of 20 mg/100 mL of CA and EV were prepared CWT method was applied to the simultaneous quantitative in methanol. The calibration solutions of the compounds analysis of the samples in the above mentioned optimized in the concentration range of 10-50 μg/mL for EV and 5-30 μg/mL for CA were prepared by using the above stocksolutions. An independent validation set solutions in the above concentration ranges were prepared from the stock The linearity of the calibration graphs obtained by solutions. The standard addition samples were prepared applying the SYM8-CWT to the analysis of EV and CA was by adding stock solution to the commercial samples.
verified by high correlation coefficients (r) as shown intable 1. In recovery studies, the analysis of 19 samples consisting of the EV-CA combinations in different In the method application, 20 sugar-coated tablets were concentration levels was used to test the precision and accurately weighed and powdered in a mortar. An amount accuracy of the proposed wavelet methods. The recovery of the tablet mass corresponding to one tablet content was results with standard deviation and relative standard dissolved in 25 of methanol. After 30 min of mechanically deviations were indicated in table 2. A good coincidence shaking, the solution was filtered by using a membrane of the obtained experimental results was observed for the filter (Sartorius Minisart ϕ = 0.45 μm). The SYM8-CWT validation of the methods. No degradation product, method was applied to the final diluted solution.
interference and systematical errors were observed during REV. CHIM. (Bucharest) ♦ 64 ♦ No. 2 ♦ 2013 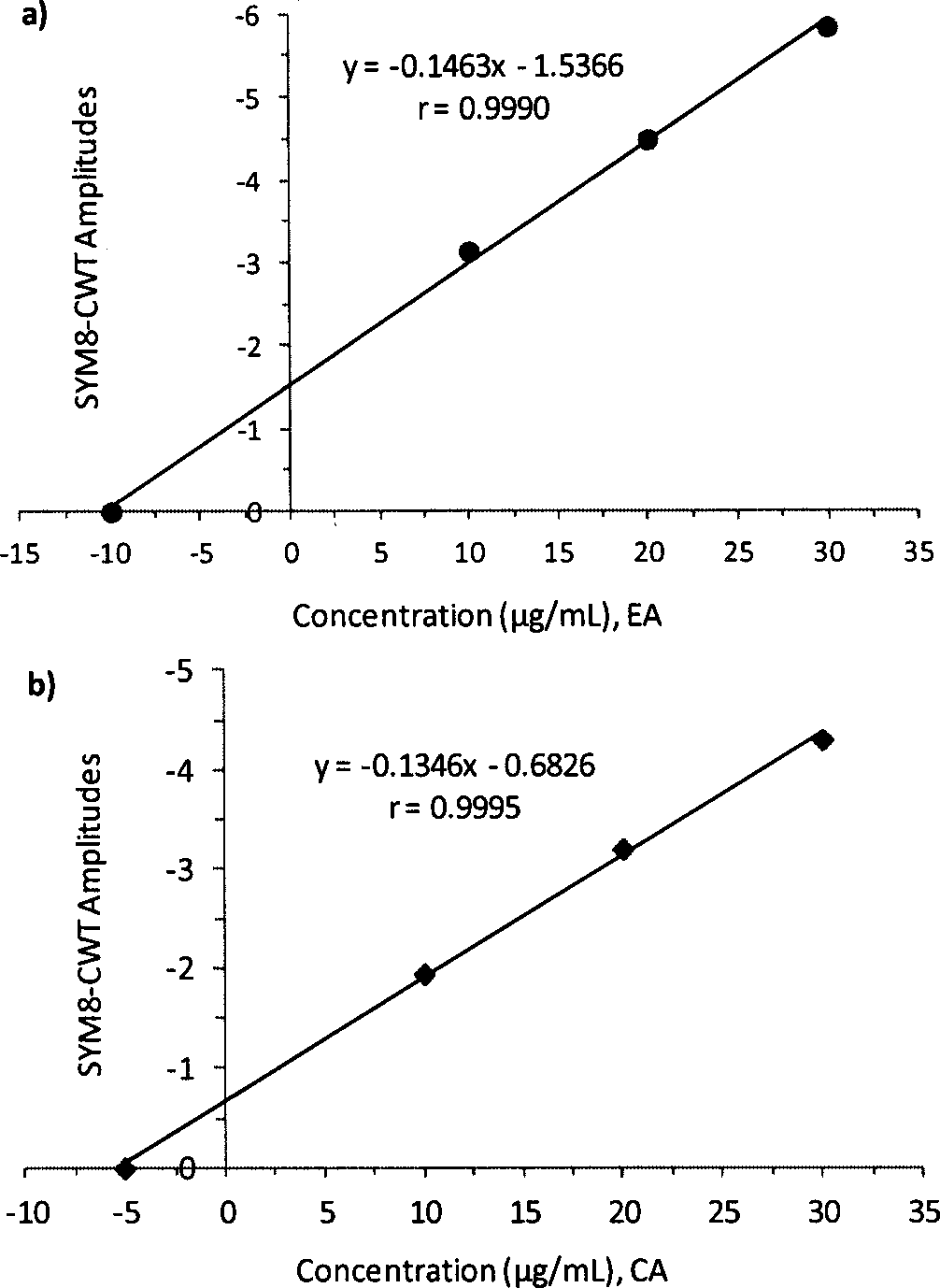 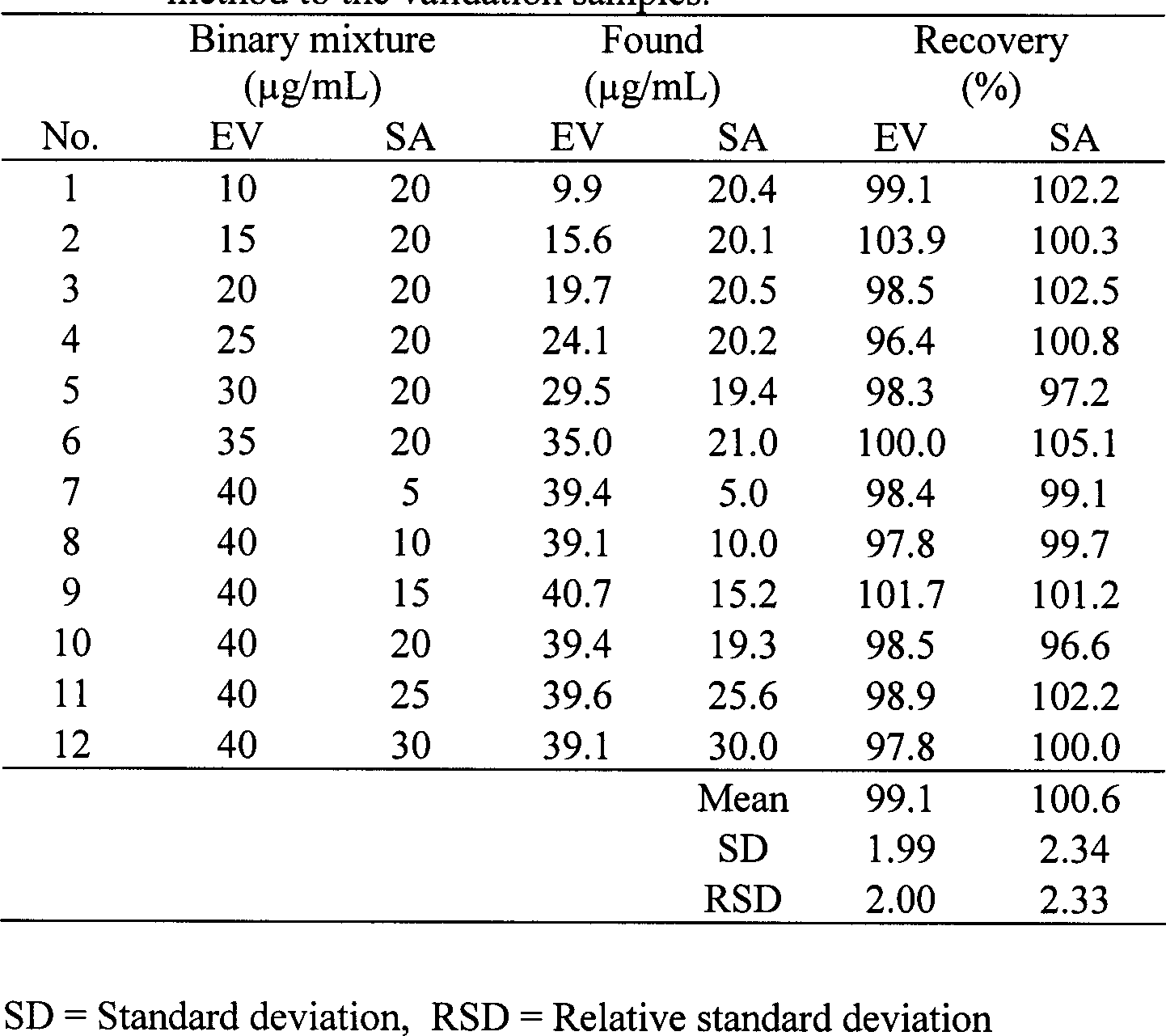 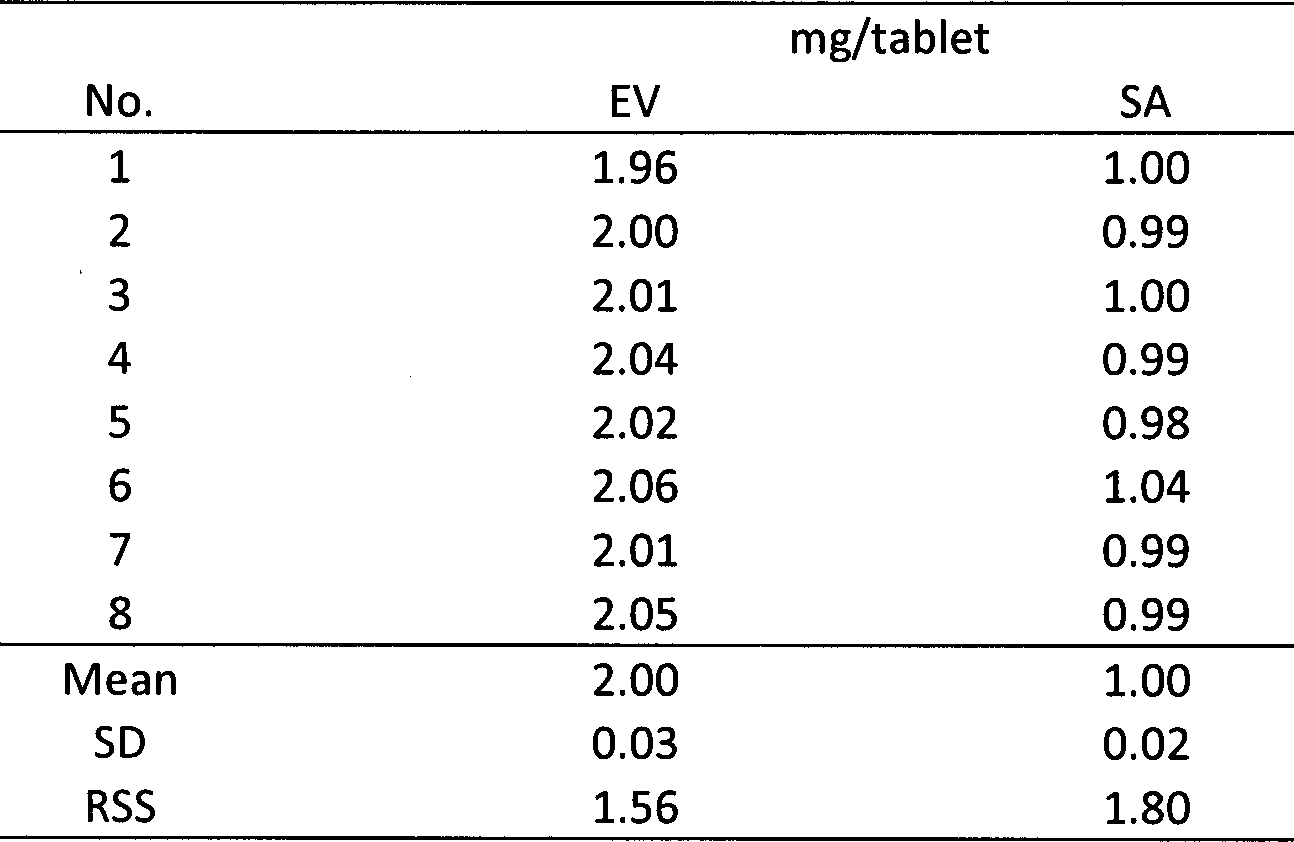 DETERMINATION RESULTS OBTAINED APPLYING THE SYM8-CWT Declarated content of the commercial sugar-coated tablets was asfollows: 2.0 mg EV and 1.0 mg CA per tablet containing EV and CA. The determination results wereshown in table 3. The experimental results and label claimof tablets showed good coincidence. The numerical datafor the analysis results of related compounds areacceptable determination limits in application of the Fig. 3. Plots obtained by the SYM8-CWT application to the standard addition samples of the EA (a) and CA (b) compounds Conclusions
RECOVERY DATA OBTAINED BY APPLYING SYM8-CWT METHOD TO In this paper, the wavelet method was applied for the simultaneous determination of EV and CA in mixtures. Thisapproach was found suitable for the quality control androutine analysis of the pharmaceutical preparationcontaining EA and CA.
Acknowledgements : This work was done within the ChemometricLaboratory of Faculty of Pharmacy and it was supported by thescientific research project No. 10A3336001 of Ankara University. References
1.*** http://home.intekom.com/pharm/schering/climan.html
2.DINC E.¸ YUCESOY C., PALABIYIK I.M., USTUNDAG O., ONUR F., 1.
J. Pharm. Biomed. Anal. 32(3), 2003, p. 539
3.HONG, Z., LU, B., WANG,C., Hua His I Ko Ta Tsueh Hsueh Pao 22
,1991, p. 87 (PMID; 1774044),
4.YUCESOY,C., EROL,S., FABAD J. Pharm. Sci. 25 ,2000,p.85
5.YUCESOY,C., EROL, S., J. Fac. Pharm. Ankara, 29 (1), 2000,p. 9
6.YODO, K., SAISHO,S., SHIMOZAWA,K., J. Yata, Endocrinol. Jpn. 4
,1990, p. 161
7.SCOTT, J.C., SALTERO,R.A., J. Chromatogr. Sci. 25 ,1987, p. 415
8.JAMES,T., J. Assoc. Off. Anal. Chem. 56 ,1973, p. 86
9.BAUMANN, A., KULMANN,H., GORKOV, V., M. MAHLER, M., KHUNZ,
the analysis procedure. The standard addition technique was applied to observe the matrix effect or the effect of 10.MENDEZ ANDREAS S. L., LISLAINE, D., CASSIA,GV., Quimica Nova, excipients on the analysis of commercial samples. The corresponding standard addition plots for both compounds 11.BATISTA ISABELLE, V., LANZ MARCOS, R. V., DIAS IARA, L. T., were presented in figure 3. We concluded that the slope TANAKA, S.M.C.N , TANAKA, A.A ., SOTOMAYOR, M.D.P.T., Analyst values of the standard addition and calibration samples became close to each other. As it can be seen in figure 3, 12.DAUBECHIES, I. Ten lectures on wavelets. Philadelphia: Society no matrix effect was reported during the analysis. The limit for Industrial and Applied Mathematics, 1992 of detection (LOD; signal-to-noise ratio of 3:1) and the limit 13.WALCZAK, B., Wavelets in Chemistry, Elsevier Press, Amsterdam, of quantitation (LOQ; signal-to noise ratio of 10:1) were calculated for EV and CA compounds. The results can be 14.DINC, E., BALEANU, D., Rev. Chim.(Bucharest) ,61, no. 3 ,2010,
p. 29015.KAMBUR, M., IBRAHIM, N. DINC, E., CANDIR,S.,BALEANU,D., Rev.
Chim.(Bucharest), 62,no. 6, 2011, p. 618
Quantitative analysis was carried out by applying the SYM8-CWT method to the commercial preparation REV. CHIM. (Bucharest) ♦ 64♦ No. 2 ♦ 2013