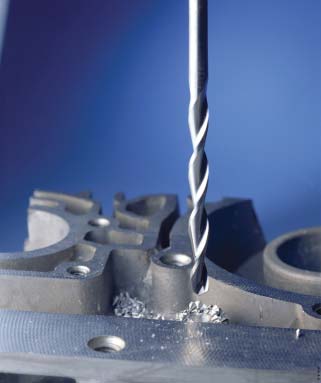 AUGUST 2002 / VOLUME 54 / NUMBER 8
❿ B Y K I M B E R LY R . P O N T I U S New Veins
of Application
The use of PCD-veined drills on difficult-to-machine materials has expanded
beyond their initial applications in the aerospace and electronics sectors.
n the late 1980s, the world was in-troduced to such future successes as IFederal Reserve Board Chairman
Alan Greenspan, baseball sluggerMark McGwire, aerobics and Rogaine.
In the same timeframe, the metalwork-ing industry witnessed the debut ofPCD-veined drills. Like Greenspan andMcGwire, there were strong hints ofpromise for the technology, developedand patented by Precorp Inc., SpanishFork, Utah, under the tradename Dia-Edge. And like aerobics and Rogaine,years passed before the tools attained alevel of credibility in peoples’ minds.
dered polycrystalline diamond sinteredinto grooves along their flute lengthsare more recognized. However, whatmay be less familiar is the expandedapplication of these tools. From initialsporadic use in the manufacturing ofaerospace and electronics parts, PCD-veined drills now are regularly imple-mented in those as well as the automo-tive and medical industries, and thetypes of applications are increasingdaily.
rick, president of Precorp, “but it alsohas the lowest coefficient of friction, An excellent application for PCD-veined drills is machining of 390 aluminum, which is
used in transmission valve bodies. 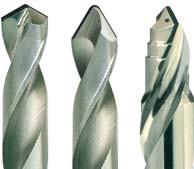 Times Change
may be a little misleading at first blush,end users of the product are hard-pressed to come up with a better name.
The drill starts as a carbide blank intowhich a small groove or slot is formed.
PCD in its pure powdered form is thenmixed with a binder and sintered intothis void during a process that com- Precorp uses a seven-step process to produce its DiaEdge tools. The process begins
with a solid-carbide blank, which is then slotted. Diamond powder is inserted into the
slot of the blank. The blank is then placed in the company’s press and subjected to
2,700° F and 876,000 psi to compress and sinter the powder into what is now called
the nib. The nib is then brazed to a solid-carbide shank. The geometry is then ground
to produce the finished PCD-veined tool.
corp says this process allows the pro-duction of rotary tools down to 0.0157" fact, drilling 10,000 pairs of holes was spars for advanced tactical fighter jets.
referred to as a nib, is then brazed to a tough resin composite must be drilled.
Taking Flight
set of wings. Cost per hole and drill up- mond tool is the integrity of the braze.
this technology to the attention of other Examples of the intricate drill point geometries
possible with Precorp’s PCD process. 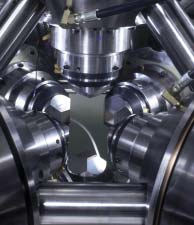 Precorp’s high-temperature, high-pressure press
can achieve pressures of 3 million psi and tempera-
tures of 3,632° F.
The Mother Lode?
costly than the carbide drill it replaced, the most effective tool “by far” is dia- Precorp’s tools) offers the ultimate in drilling of carbon-fiber-reinforced plas- tics proliferate. In such processes, edge lead to tearing out of the fibers, thereby deteriorating the integrity of a hole’s edge. Using a relatively sharp point angle using (Precorp’s) products since 1990.
of the drill and allows the cutting edge to cleanly trim fibers at the hole exit.
veined drills and other tools, call Pre- corp Inc. at (801) 798-5425, visit www. precorp.net or circle Information
Services #325.
About the Author
uum system yields positive results, too.
Kimberly R. Pontius is a regular con- at Ivy Tech State College, Region 3, erties dramatically, they also accelerate CUTTING TOOL ENGINEERING Magazine is protected under U.S. and international copyright laws. Before reproducing anything from this Web site, call the Copyright Clearance Center Inc. at (978) 750-8400.

THE KETTLE FRIENDSHIP SOCIETY Casual Employees Great-West Life is a leading Canadian life and health insurer. Great- West Life's financial security advisors work with our clients from coast to coast to help them secure their financial future. We provide a wide range of retirement savings and income plans; as well as life, disability and critical illness insurance for individuals and