4.4.05The TechnologyPublication for Government Security applianceskeep mail stream clean SHORT STACK: Network appliances such as those from Panda Software, Proofpoint Inc. and CipherTrust (top to bottom) are playing a growing role in keeping malware out of e-mail.
siders, is to simply unplug your router.
world, they have instead relied on a cen- Appliances act as sleepless guards, scan- learned to exploit holes that exist in the firewall to let in valid traffic. And a gate- selves or sit directly behind the firewall.
before they can get a foot in the door.
way to a client system—before challeng- to make sure every single client is up to Reprinted from Government Computer News April 4, 2005. Copyright Post Newsweek Tech Media. All Rights reserved. is flagged as spam or virus-laden, it can affect productivity and cause a networkmanager to lose confidence in his secu- only five were incorrectly quarantined.
That is less than one percent of the total on real-time blackhole lists to help iden- connection to check the lists, which itdoes for each message. This created a work to have between 10 and 60 userssending or receiving e-mail at the same Helping keep
spam in the
on the Barracuda. By the time our testended, an incoming message had to delivery. That’s a significant lag time.
At first glance, the Barracuda seems like test its effectiveness. We also sent what Firewall 300 is less than half the size of filled. But waiting that long for e-mail is It does not have the ability to scan out- that charge by the seat. It also is the only let through 3.5 percent of the viruses we does require users to log in using a con- box in this review that is almost ready to sole interface, at least initially. The con- sole interface is simple and easy to con- figure. All you need to do is set the IP of interface for further configuration.
you’re able to discover and deliver them Barracuda Networks Inc., Cupertino, mail traffic for both spam and viruses.
Calif., 408-342-5400, www.barracud- viruses, but it also tended to filter out cent accuracy rate. In the virus test, we 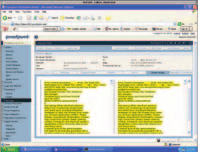 like set of queues, each one scrutinizing such as viruses, spam or illegal content.
STRONG POINTS: Proofpoint offers an especially well- a unique way. First they are put into the If you are willing to invest a bit of extra did not generate any false positives.
CipherTrus, Inc., Alpharetta, Ga., 678- ance’s antivirus protection is probably the “join” queue and passed on to the most users, but it proved a bit of a stum- the lab to try and tweak their settings, it maintained without special training.
work, for a 96.5 percent accuracy rate.
client, or you can restrict access to a cer- review to achieve full 100-percent effec- might not want it as your only virus pro- Panda Software Inc., Glendale, Calif., plug-and-play, but it’s pretty close.
818-543-6901, http://us.pandasoft- tive in killing spam. It was able to catch effective. What’s more, it did not gener- ate any false positives, although we tried sent it, for a 99.54-percent effectiveness set rules and work the various settings.
very high level, but it also lets you drill load file of best practices, which we used for our test setup. But if you go with the ning engine itself by altering how differ- ent factors—and even certain words—in training time to get it up and running— THE GRADES enter 112 in the Quickfind box.
Protects outbound/inbound mail at same time These guards
stop malware
at the gate
sender against further spam scanning.
it, tries to leave the network via e-mail require approval for user whitelisting or cies that need to protect their data at all costs, but it adds $12,915 to the cost of ly to maintain. The appliance itself costs is passed on, deleted or quarantined.
for a 99.97 percent effectiveness rating.
data. Still, that’s less than the IronMail control over the various scores, so some- Proofpoint Inc., Cupertino, Calif., 408-517-4710, www.proofpoint.com ■ words such as merger, confidential or secret to ensure such documents can’t go

Considered Judgement Form This form is a checklist of issues that may be considered by the Purchasing Guidance Advisory Group when making purchasing recommendations. Meeting date: 24 March 2005 Topic: Evidence based review of medicines for sexual (erectile) dysfunction in men Background and Purpose: ACC has a responsibility to support social rehabilitation. In certain circu