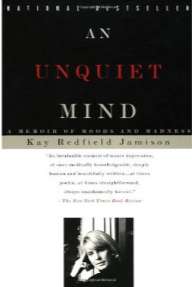 About the Author (taken from
ReadingGroupGuides.com) Kay Redfield Jamison is the daughter of an Air Force officer and was brought up in the Washington, D.C., area and in Los Angeles. She attended UCLA as graduate student in psychology, and she joined the medical school faculty there in 1974. She later founded the UCLA Affective Disorders Clinic, which has treated thousands of patients for depression and manic-depression. Dr. Jamison is now Professor of Psychiatry at the Johns Hopkins University School of Medicine. The textbook on manic-depressive illness that she wrote in association with Dr. Frederick Goodwin was chosen in 1990 as the Most Outstanding Book in Biomedical Sciences by the Association of American Publishers. She is also the
author of a trade book, Touched with Fire: Manic-Depressive Illness and the
Artistic Temperament (1993), and has produced three public television specials
on the subject: one on manic-depressive composers, one on Vincent van Gogh, and
The recipient of numerous national and international scientific awards, Dr. Jamison was a member of the first National Advisory Council for Human Genome Research, and is currently the clinical director for the Dana Consortium on the Genetic Basis of Manic-Depressive Illness. She lives in Washington, D.C., with her husband, Dr. Richard Wyatt, a physician and scientist at the National Institutes of Health.
Discussion Questions (taken from ReadingGroupGuides.com)
1. "The long and important years of childhood and early adolescence.were to be
an extremely powerful amulet, a potent and positive countervailing force against future unhappiness"[p. 15]. What aspects of Jamison's early life and upbringing helped to provide her with emotional support on which to draw years later?
2. What benefits did the conservative military lifestyle led by the Jamisons confer
upon the young Kay Jamison? With what disadvantages did that same culture, with its stiff-upper-lip creed, afflict her in her battle with mental illness?

3. In graduate school, Jamison writes, "Despite the fact that we were being taught
how to make clinical diagnoses, I still did not make any connection in my own mind between the problems I had experienced and what was described as manic- depressive illness in the textbooks"[p. 58]. Why did she refuse to acknowledge the obvious? Why didn't she question the "rigid, irrelevant notions of self-reliance"[p. 101] she had been taught?
4. "Being open is the sort of thing that I advise people to think very long and hard
about,"Jamison has stated. "It's one thing if you're independently wealthy. It's another thing if you're out in the real world"(Washington Post Magazine, 4/16/95). Why did Jamison avoid bringing her illness into the open for so many years, and what made her finally decide to do so?
5. Jamison worries that we could "risk making the world a blander, more
homogenized place if we get rid of the genes for manic-depressive illness"[p. 194]. On the other hand, E. Fuller Torrey, a well-known author and schizophrenia researcher, says he "would quite happily lose a van Gogh to treat the disease"(Washington Post Magazine, 4/16/95). Which point of view do you endorse? Can you sympathize with both sides of the issue?
6. With her book Touched with Fire and her public television specials on artists
like Byron, van Gogh and Schumann, Jamison has been accused by some of her colleagues of romanticizing manic-depressive illness by associating it with creative genius. Does this accusation seem reasonable or unreasonable to you?
7. "Lithium moderates the illness,"Jamison observes, "but therapy teaches you to
live with it"(Time, 9/11/95). Has she convinced you that drugs plus psychotherapy is the answer for mental illness? In that case, might not psychotherapy benefit people suffering from any debilitating illness, not just a mental one?
8. Some physicians wonder whether the increased use of mood-regulating
medications might lead to a society-wide practice of chemically altering personality, with the result of making people blander and more conformist (the widespread use of the anti-depressant Prozac has helped fuel this debate). "Which of my feelings are real?"Jamison asks. "Which of the me's is me"[p. 68]? Jamison's sister discouraged her from taking lithium, saying that her "soul would wither if [she] chose to dampen the intensity and pain of [her] experiences by using medication"[p. 99]. How much of personality do you believe to be intrinsic, and how much is a result of biological impulses and chemicals? Is such a question even answerable?
9. Her work, and her own illness, convinces Jamison of "the total beholdenness of
brain to mind and mind to brain. My temperament, moods, and illness clearly, and
Last Updated – May 2, 2012

An Unquiet Mind
by Kay Redfield Jamison (Continued)
deeply, affected the relationships I had with others and the fabric of my work. But my moods were themselves powerfully shaped by the same relationships and work"[p. 88]. Jamison expresses anger against physicians who draw a distinction between "medical illnesses"and psychiatric illnesses [p. 102]. Does she imply that there is, in actuality, no difference? If there is a difference, of what does it consist?
10. "Depression, somehow, is much more in line with society's notions of what
women are all about.Manic states, on the other hand, seem to be more the
provenance of men"[p.122]. What might the results of this stereotyping be when it comes to giving treatment?
11. After David's death, Jamison reflects that "grief, fortunately, is very different
from depression"[p.150]. How can you explain the essential difference between the
two? Is it more possible to cope with the "real"causes of grief than with the impalpable causes of depression?
12. Through bitter experience Jamison comes to recognize the value of emotional
steadiness in a relationship, but "somewhere in my heart,"she writes, "I continued
to believe that intense and lasting love was possible only in a climate of somewhat tumultuous passions"[p. 170]. Is this feeling peculiar to Jamison and her temperament, or does it reflect certain assumptions in our society? How is the importance of love and friendship demonstrated again and again in the story? How does each of the three principal men in Jamison's life help her to seek a cure?
13. Jamison worries that her work may now be seen by her colleagues "as
somehow biased because of my illness,"while admitting that "of course, my work
has been tremendously colored by my emotions and my experiences"[p. 203]. Does this make her work less viable than strictly "objective"work, or more so?
14. "My major goal has been to really try and make a difference in how the illness
is seen and treated"(Philadelphia Inquirer, 9/18/95). Has she succeeded, so far as you are concerned? Which of your preconceptions were changed by reading her account?
15. "Do I really think that someone with mental illness should be allowed to treat
patients?"[p. 204] Jamison asks. She ultimately answers the question in the affirmative. What would your own answer be? Last Updated – May 2, 2012

Service Material from the General Service Office TRADITIONS CHECKLIST from the A.A. Grapevine These questions were originally published in the AA Grapevine in conjunction with a series on the Twelve Traditions that began in November 1969 and ran through September 1971. While they were originally intended primarily for individual use, many AA groups have since used them as a basis for w