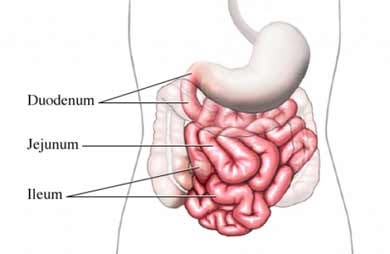 MEN has many complications and diseases associated with it. Zollinger-Ellison Syndrome (ZES) is relatively common to people with MEN 1. The syndrome was first described by the Norwegian doctor Roar Strøm in 1952. Therefore the syndrome sometimes also is called Strøm-Zollinger–Ellison syndrome in the literature. The syndrome was later described in 1955 by Robert Zollinger and Edwin Ellison, both surgeons at Ohio State University. It is a rare condition caused by the development of gastrinomas, a type of nueroendocrine tumor, in the gastrointestinal tract, most frequently in the linings of the lower stomach, duodenum and in the pancreas. Some gastrinomas originate in the pancreas and spread to the duodenum, others the reverse. Usually, these tumors secret the peptide hormone gastrin. About 60-70% of gastrinomas form in the Duodenum or the lymph glands close to the pancreas. The gastrinomas cause increases in gastric acid, subsequent ulceration of the stomach and duodenum. Patients with the Zollinger-Ellison syndrome don't always have symptoms. When symptoms do occur, they can include: Nausea, Diarrhea, Burning Pain in the Abdomen, Vomiting, Bleeding, Weakness and Fatigue. A person who has Zollinger-Ellison syndrome may have only one gastrinoma or may have more. ZES is not isolated to MEN 1 patients. In fact, only about one-quarter of ZES patients also have MEN 1. Another complication of ZES is that in up to two-thirds of cases, gastrinomas develop into malignant tumors. These malignant gastrinomas can spread to other parts of the body, including the liver, lymph nodes, spleen, bones, or even the skin. If your doctor suspects that you have ZES, he or she will perform a blood test to look for high levels of the peptid hormone gastrin (the hormone secreted by gastrinomas). They may also perform tests to measure how much acid your stomach is producing. 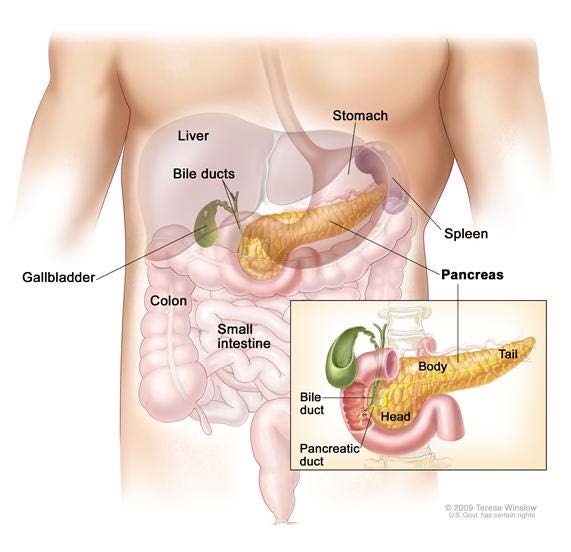 Anatomy of the pancreas. The pancreas has three areas: head, body, and tail. It is found in the abdomen near the stomach, intestines, and other organs. If you present with symptoms to your doctor which may indicate you have Zollinger-Ellison Syndrome, there are a number of tests your doctor may order for you. The doctor will ask you to quit taking Nexium or any other proton pump inhibitor for two weeks prior to tests. The doctor doesn't want your tests to be altered by the effects of the proton pump inhibitor. Fasting serum (blood) gastrin test: A test in which a blood sample is checked to measure
the amount of gastrin in the blood. This test is done after the patient has had nothing to eat or
drink for at least 8 hours. Conditions other than gastrinoma can cause an increase in the
amount of gastrin in the blood.
Basal acid output test: A test to measure the amount of acid made by the stomach. The test
is done after the patient has had nothing to eat or drink for at least 8 hours. A tube is inserted
through the nose or throat, into the stomach. The stomach contents are removed and four
samples of gastric acid are removed through the tube. These samples are used to find out the
amount of gastric acid made during the test and the pH level of the gastric secretions.
Secretion stimulation test: If the basal acid output test result is not normal, a secretin
stimulation test may be done. The tube is moved into the small intestine and samples are
taken from the small intestine after a drug called secretin is injected. Secretin causes the
small intestine to make acid. When there is a gastrinoma, the secretin causes an increase in
how much gastric acid is made and the level of gastrin in the blood.
Somatostatin receptor scintigraphy: A type of radionuclide scan that may be used to find
small pancreatic NETs. A small amount of radioactive octreotide (a hormone that attaches to
tumors) is injected into a vein and travels through the blood. The radioactive octreotide
attaches to the tumor and a special camera that detects radioactivity is used to show where
the tumors are in the body. This procedure is also called octreotide scan and SRS.
Your doctor may also examine you for ulcers by performing an endoscopy. This procedure is done with a flexible, lighted tube (an endoscope) that looks at your esophagus, stomach and duodenum. This is often done with endoscopic ultrasound to see tumors. A CAT scan or MRI may also be performed to locate the gastrinomas. Despite these tests, gastrinomas can be difficult to find, because they usually start out as very small, even microscopic lesions. ZES is treated by reducing the amount of acid your stomach produces. Medications called proton pump inhibitors are usually prescribed. These drugs, which include Prevacid, Prilosec, Protonix, Nexium, and Aciphex, curb the production of stomach acid and allow the ulcers to heal. Doctors may also prescribe medications known as H2-blockers, such as Tagamet, Pepcid, and Zantac. However, these drugs don't work as well to reduce stomach acid. In some cases, a patient may need surgery to remove the gastrinomas. However, only about 20%-25% of patients who have surgery are cured. For malignant tumors, radiation and chemotherapy may be offered. MEN patients are always at risk for re-occurrence, because of the genetic predisposition to develop these tumors. Gastrinomas tend to grow slowly and are not always malignant. The five-year survival rate once the tumors have become malignant depends on whether the tumors have spread. If they have not spread to the liver, the five-year survival rate is approximately 90%. The percentage drops to 20% if the tumors have spread to the liver. The author's brother recently was diagnosed as having malignant gastrinomas that have spread to his pancreas and liver. He is being observed at M.D. Anderson every three months to measure the growth rate of the tumors. There are 8 palpable malignancies in his liver and they are so diffuse that surgery is not possible. Both he and I, along with another brother and our now deceased sister all were diagnosed with MEN 1. The situation for my brother underscores the necessity for capable and experienced follow-up and treatment once a patient is diagnosed with MEN. The American Multiple Endocrine Neoplasia Support Center and our Medical Advisory Committee highly recommend that patients be followed routinely and frequently with an experienced endocrinologist and that any surgical treatment be performed by an experienced Endocrine Surgeon. Note: My appreciation to the National Cancer Institute at the National Institutes for Health for the figures and much of the content of this article.