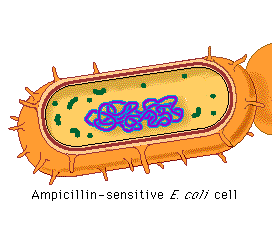 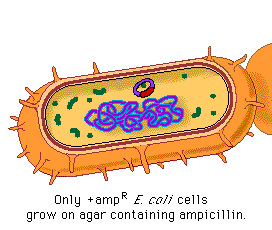 Purpose: To gain an understanding of the techniques of culturing E. coli bacteria and transforming E. coli

Introduction: E. coli bacteria are the most common bacteria in the human gut. They help us digest food and
create Vitamin K. E. coli has been extensively studied in the laboratory and is an important research organism, mainly because it reproduces very rapidly---a single bacterium can divide and form millions of bacteria E. coli has all its required genes found in a single chromosome. Some E. coli cells also contain plasmids—small DNA molecules that carry genes for specialized functions—
including resistance to specific drugs. Scientists have learned how to put new genes into a plasmid by cutting open the plasmid with restriction enzymes, inserting a new gene into
plasmid, and then placing it into a bacterium. In this lab, you will be using already genetically altered plasmids that contain a new gene for resistance to the antibiotic ampicillin and a second gene called pGLO that will enable us to recognize bacteria that

Genetic transformation is a process where an organism will be forced to take into its genome a plasmid
containing a foreign gene. In this lab, you will be adding a plasmid with the foreign gene, ampR, into E. coli bacteria that will transform them into ampicillin resistant bacteria.
PLASMID WITH +pGLO/ampR gene
CHROMOSOME
Ampicillin-sensitive E. coli cell
Ampicillin-resistant E. coli cell
To transform bacteria cells, the cells need to be made competent or capable of taking up DNA plasmids.
Bacteria will be more likely to take up plasmids if their cell walls are altered to allow the plasmids in more easily. The bacteria cells will be made competent by a process that uses calcium chloride and heat “shock”. Bacteria cells are also more competent if they are in a rapid growth stage, so the timing of the transformation
Culturing is the process of growing bacteria in Petri dishes on a gelatin-like substance called agar. Agar
contains nutrients and moisture for bacterial growth and reproduction. In this lab, you will be using Luria
Broth (LB) agar. The bacteria will grow in small “piles” called colonies since they contain millions of
individual bacteria cells. Some of the agar will be laced with the antibiotic ampicillin, to determine if the bacteria are resistant or killed by the antibiotic. Arabinose (ara) is a simple sugar and is a source of energy for
bacteria. If arabinose is present in the bacterium’s environment, it allows the bacterium to turn on genes, to produce the enzymes, to digest the arabinose. If arabinose is not present, the bacterium does not turn on these genes, and thus doesn’t waste energy producing an enzyme that is not needed.

Sterile Procedures: The techniques of sterile procedure apply to any activity in which you work with bacteria
or fungi. Since you are working with E. coli bacteria in this lab, it is important that you not contaminate your work with any foreign bacteria or expose yourself to potentially hazardous bacteria. The chart below summarizes the basics of sterile procedure. Always wash your hands and work surface before Always keep the lid of the Petri dish on it or over it at Never lay the lid of the Petri dish or culture tube on Always open all sterile tools carefully. Never touch the end of a tool that touches bacteria. Always keep hair pulled back and use goggles when Never throw biohazard materials in the regular trash. Always wash your hands thoroughly with soap and hot PreLab Knowledge Questions:
2. What is a plasmid and what are humans using them for? 3. What genes have been put in the plasmids that we will be using and what is their function? 4. What is meant by “antibiotic resistance?”
5. What is the difference between an “+pGLO/ampR cell” and a “– pGLO/ampR cell?”
7. What is meant by a bacterial cell becoming “competent”? How will we make the bacterial cells 9. What is agar and what kind of agar will we be using in the lab? 10. What is a bacterial colony and how will it look? 12. What happens in a bacterium if the sugar arabinose is in its environment? 13. What happens in a bacterium if arabinose is not present? 14. If a bacterium does not pick up one of the plasmids, and it is placed on an agar that contains ampicillin, 15. When do sterile techniques need to be used?
PreLab Observations:
Recall that the goal of genetic transformation is to change an organism’s traits (phenotypes). Before any change in a trait can be detected, a thorough examination of its natural phenotype must be made. Look at the colonies of E. coli on your starter plate. List all observable traits that can be described. Number of colonies:
Size of largest colony (mm):
Size of smallest colony (mm):
Color of colonies:
Distribution of colonies
(locations on plate):
Appearance of colonies
under ultraviolet light:

Data: Describe and draw each bacterial plate.
Plate Name
Pre-Description
Post-Description
- pGLO/ampR
- pGLO/ampR
+pGLO/ampR
+pGLO/ampR
LB/amp/ara agar with ampicillin plus
Conclusions and Interpretations:
1. To genetically alter an entire organism, you must insert the new gene(s) into every cell in the organism. Which organism is better suited for total genetic transformation—worm, fish, bacteria, or mouse? Why? 2. Which plate in your experiment was the control? What is the purpose of a control? 3. Of the E. coli traits you originally noted, which now seem to be significantly different after performing the
4. Explain what happened on the - pGLO/ampR plasmid + LB agar plate and why.

5. Explain what happened on the - pGLO/ampR plasmid + LB/ampR agar plate and why.

6. Explain what happened on the +pGLO/ampR plasmid + LB/amp agar plate and why.

7. Explain what happened on the +pGLO/ampR plasmid + LB/amp/ara agar plate and why.
8. What two factors need to be present in the environment for the bacteria to glow green under the UV light? 9. What advantage would there be for an organism to be able to turn on or off particular genes in response to

By the Commodore is still just time to join all or part of the Peterport, Carteret and St Helier during 11 – 17 July. For instance, attending the only seems like yesterday that 63 of us (a interested, please contact Richard Snell of absence, and I look forward to further A letter from John Singleton- an addition to the Club Fleet please enter into your diary the Annual