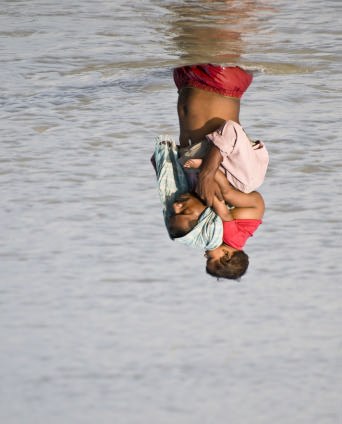 FINAL REPORT
Child Protection in Emergencies
Lessons Learnt Workshop on 2008 Flooding
February 10-11, 2009
Organized by: UNICEF Nepal
Executive Summary
The breach of the Koshi dam on the 18th of August 2008 resulted in massive flooding
across Sunsari and Saptari districts in the east of Nepal. Over 60,000 people were displaced, taking refuge in schools, and eventually long-term IDP camps. In September seasonal flooding in the west of Nepal affected a further 30,000 households.1 These two events proved the first real test of the capacity of the child protection-sub cluster, working together, to respond to a large scale emergency. The Lessons Learnt workshop, held in Kathmandu in February 2009, aimed to share experiences from the 2008 floods response, draw lessons and determine priorities for preparedness in relation to potential natural disasters and civil unrest in Nepal. It also aimed to draw up a new Contingency Plan for CPiE for 2009. The main lessons learnt were the following: ? A short training package should be developed to promote mainstreaming of child protection issues in preparedness and response activities by other actors, including key district stakeholders, cluster members from other clusters etc. ? WDOs in at-risk districts should be provided with general management training as well as capacity-building on CPiE, to enhance their overall coordination and leadership of the cluster at the district level ? Clear focal persons need to be identified before and during emergencies to ensure coherent and streamlined information-sharing and response ? The mapping of child protection actors in at-risk districts prior to the next emergency season needs to be carried out by the cluster, with support from OCHA ? Following this, capacity-building for cluster members in those at-risk districts ? District-level cluster contingency plans should be developed before the next emergency season with support from the national sub-cluster ? Monitoring and evaluation tools to be fine-tuned and tested, with orientations Although some of the recommendations have been factored into ongoing programming, some are new ideas, and will require coordinated action, advocacy, fundraising and planning. Further trainings will also be necessary before the beginning of the next emergency season to ensure that the relevant actors are prepared for further emergencies. The lessons learnt have been incorporated into the child protection contingency plan for 2009. 1 OCHA Situation Report, 22 October 2008, quoting NRCS data.
Table of Contents

The following recommendations comprise a summary of the main lessons learnt by the cluster,
both in terms of preparedness and response. They relate to lessons learnt at field and at national level. The lesson learnt were arrived at for each theme, taking into account the successes and challenges agreed upon in the group sessions, as well as the information conveyed in the presentations.

Several successes were identified in relation to the child protection rapid assessment tool,
including that it addresses all child protection issues; was a useful guide for developing response plans; and results of the assessment could be shared with other clusters and used for advocacy purposes. Challenges were that the tool was not practical for a truly rapid assessment as it was too detailed and time-consuming to fill out. The tool was not translated into Nepali and neither was the assessment report, and there was no proper orientation before its use. Recommendations included:
Preparedness
? Streamline the questions to make the tool more suited for rapid assessment
Response
? Translate the tool and final assessment report into Nepali ? Providing an orientation to the people charged with filling out the assessment forms ? Management of logistics, and finance for assessment, as well as dividing responsibility/groups should be done by the WDO in coordination with other cluster ? Assigning one organization to analyze the data and using this analysis to inform the child E. Identification of Target group/beneficiaries:

Successful identification of children was made possible through mobilization of existing local
structures, including Paralegal Committees, Community Based Organisations and the NRCS. However, the high mobility of the population made identification of children difficult, as did the proliferation of informal camps, the difficulty of tracing families staying with host communities, and the fact that some children were sent away from their families to host communities. An ongoing lack of age -disaggregated data about children in general made targeting and designing programmes difficult, and complicated efforts to trace and reunify missing or separated children. The presence of Indian citizens and the resulting cross-border issues also complicated targeting and identification of beneficiaries. Recommendations for the cluster included:
Preparedness
? Mapping and disaggregating of population data in at-risk districts to be conducted in preparation for emergencies, in cooperation with district stakeholders such as VDCs and
Response
? Any rapid assessments and ongoing data collection by the sub-cluster or other clusters should disaggregate data by age, with uniform age categories agreed upon in advance ? Greater efforts should be made to use existing data to trace displaced children, living with their families or not, who fall outside of the formal camp structures F. Separation, Family tracing and reunification:

The successes in providing psychosocial support rested on the mobilization of counselors and
CPSW who could speak local languages; the provision of some orientations to affected communities, and to CMCs, teachers and parents on basic psychosocial issues, which helped in early identification of cases,; the mobilization of government and private sector health personnel; the use of safe spaces to target support to pregnant and lactating women; the formation of self-help groups; and the value of psychosocial assistance in helping to identify other child protection issues. However, coordination among psychosocial service providers was lacking, there was a lack of counselors and social workers available from the local community, and a lack of continuity of counselors due to high staff turnover. In addition, support for psychosocial initiatives was lacking among district stakeholders, and among the beneficiaries themselves, who preferred material support. Difficulties in follow-up of cases due to high mobility of the IDP population was also a problem, as was the lack of a proper recording and information-sharing system for cases. Finally, a lack of private spaces for counseling resulted in confidentiality issues, and possibly prevented some people from seeking support. The following recommendations for improving psychosocial services were made, to be implemented by TPO, with the support of the WDO, DPHO and other cluster members:
Preparedness
? More counselors and CPSW at the community level (in at-risk districts) should be trained as preparation in the provision of psychosocial services, and referral of cases to
Response
? All psychosocial service providers active during an emergency should be consulted in the ? Awareness-raising activities should be conducted to sensitize IDPs on the importance ? Orientations on psychosocial care should be provided to teachers, Watch and Peer Groups, CMCs, as well as training and support to families of affected children, including fathers. Guidelines on psychosocial support should be developed for this purpose, to assist community-based identification and referral of psychosocial issues ? Psychosocial services should be made available in designated and confidential spaces, preferably for 7 days a week in IDP camps, and if the resources for this are not available, at the least communication channels should be established for referral of serious cases that arise when counselors are not available on-site. ? Psychosocial activities should be integrated into other area, such as safe spaces, where the focus is more on recreational and educational activities for children ? General orientations or training on child protection to other clusters and district stakeholders should include a component on psychosocial counseling and its J. Community mobilization/Child protection awareness raising:

The establishment of joint monitoring teams by the cluster during the emergency provided
some useful data and allowed for resource-sharing. Coordination with other clusters, such as the CCCM cluster which was collecting data regularly, resulted in some targeted information on beneficiaries. Reporting during the emergency was largely effective, due to the regular cluster meetings and, which acted as an information-sharing forum. However, monitoring, reporting and evaluation were largely informal during the emergency – there was no systematic monitoring or evaluation of the child protection response. A monitoring and evaluation tool was developed for use by the clusters in Sunsari and Saptari, however the tool was not used, as it required fine-tuning and testing, and there was not enough momentum to this end. Joint monitoring teams did not go out regularly, nor was responsibility for information-gathering and reporting allocated. This reflected wider issues, that when problems were identified, this did not always lead to action, as responsibilities were not clearly allocated. Difficulties in gathering data on target populations affected the quality of response throughout. Recommendations for improving monitoring, evaluation and reporting include:
Preparedness
? Develop clear child protection indicators at the national level along with fine-tuning and testing the monitoring tool, to enable standardization and assessment of the child protection response. Any monitoring tool should allow for random spot-checks asking beneficiaries, especially children, how they perceive the response/programme. The cluster will also require orientation on how to use monitoring tool as part of general CPiE training, with refresher orientations for monitoring teams during the emergency
Response
? Coordinate with the CCCM data-collection efforts to ensure up-to-date information on ? Joint monitoring teams need to be established right at the beginning of the emergency to go out regularly to monitor the response, using the indicators and monitoring tool. The response should be evaluated against this data and the action plan developed by the cluster. If necessary, the action plan and response should be adapted ? Monitoring reports should be regularly shared with the national sub-cluster to inform ? Information should be shared with OCHA, district stakeholders and other clusters to mainstream child protection issues and promote comprehensive child protection ? Once reports are made to the cluster from various organisations, clear responsibilities should be allocated where possible to ensure reporting leads to action (WDO) ? The child protection national sub-cluster lead could use the 3W model and on this basis facilitate better coordination of activities, and dissemination of information to field and 3. Contingency Plan by the Sub-Cluster

The participants discussed the child protection contingency plan to be developed, aimed at improving response
to future floods, and to strengthen preparedness to this end. The contingency plan is detailed below:

OVACOME FACTSHEET 26 Treatment-induced Menopause: Facing the Issues What is the menopause? ▼ Combination drugs: increased toxicity toThe menopause is a natural hormonal process,during which tie the woman’s oestrogen levels▼ Age: increased risk of ovaries failing over thegradually fall, and there is an increase in follicleage of 35. Younger women are also at risk,stimulating