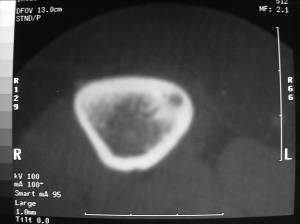 James C. Wittig, MD
Orthopedic Oncologist
Percutaneous Radiofrequency Ablation (RFA)
The latest, “State of the Art Treatment” for Osteoid Osteoma is PERCUTANEOUS
RADIOFREQUENCY ABLATION (also known as RFA). This is a minimally invasive
procedure that is performed under a CAT Scan, usually by a highly specialized musculoskeletal
radiologist, in which a needle or probe is inserted into the lesion and the lesion is heated and
destroyed. The CAT scan is utilized to localize the Osteoid Osteoma so the needle can be guided
directly into the tumor. It is an outpatient procedure. The patient goes home the same day. It is
minimally invasive and therefore only a small stab incision or poke hole is made for the needle.
The procedure does require that the patient be put to sleep with general anesthesia because
insertion of the needle into the Osteoid Osteoma is very painful. The patient must also lie
motionless during the procedure. The procedure is greater than 90% effective. This is the same
success rate as with actual surgical removal. The pain from the osteoid osteoma is usually
relieved within 1 day. Often in the recovery room after the procedure, the patient will say that
the pain from the tumor is gone. There is full use of the leg or arm and return to normal
activities the following day. There is virtually no blood loss and very little risk (less than 1% risk)
of developing an infection after the procedure. Less than 10% of the time the procedure needs
to be repeated or the patient requires a surgical procedure to remove the tumor.
These are the CT scans of a patient who underwent RF Ablation of an osteoid osteoma of the tibia. The first CT scan demonstrates the nidus (arrow) of the osteoid osteoma. The second CT scan demonstrates the tiny RF ablation probe (arrow) being inserted into the nidus through a small needle. 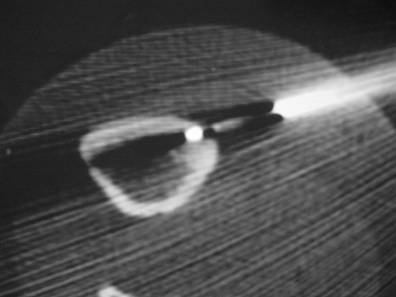 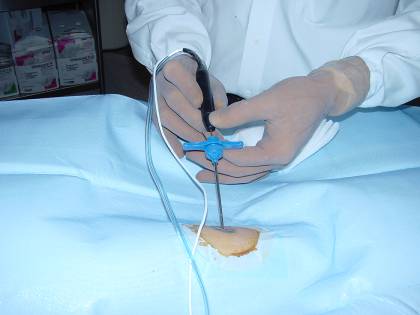 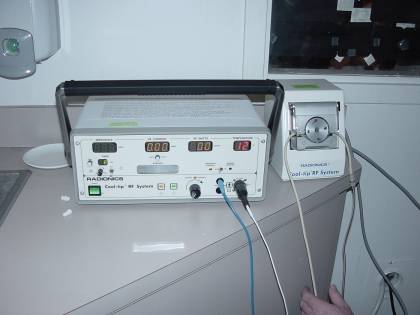 Other treatment alternatives include surgical excision or simply treating the pain with
chronic, non-steroidal anti-inflammatory medication like aspirin, naprosyn, ibuprofen or
motrin. Surgical excision of the lesion has always been the traditional treatment for an
Osteoid Osteoma. Due to the extremely small size of an Osteoid Osteoma, it can be very
difficult to identify the tumor during surgery. It is like “LOOKING FOR A NEEDLE
IN A HAYSTACK”. The area of the bone containing the Osteoid Osteoma would be
localized during surgery. A large piece of bone would need to be removed to ensure the
Osteoid Osteoma was removed with the bone. Osteoid Osteomas are so small; they can be
extremely difficult to localize accurately during surgery. Therefore, a large piece of bone in
the proposed area of the tumor is often removed. A large incision is required. It is obvious
that this type of surgery is much more extensive and associated with many more potential
problems or complications compared to RF ABLATION. This type of surgery often
requires the bone to be protected by placing a metal rod inside the bone or by fastening a
plate on the bone with screws to prevent the bone from fracturing or breaking after the
surgery. Additionally, a bone grafting procedure may need to be performed to fill in the
defect in the bone There is also much higher risk of infection, blood loss, nerve dysfunction
and scar tissue formation. There is more pain and the patient usually remains in the hospital
for several days. A prolonged recovery period as well as physical therapy and rehabilitation
are required. The surgical pain may last for months, requiring narcotic pain medications.
If the tumor is capable of being localized accurately during surgery (much of this depends
on surgical expertise), a small drill can often be utilized (Procedure referred to as “Burr-
Down Resection”) to remove the tumor without removing a lot of bone. Sometimes, a
needle can be placed into the tumor under a CT scan to localize the tumor for the surgeon.
(similar to how the needle is inserted for RF ABLATION) The patient is then transported to
the operating room where the surgical procedure is performed. The needle helps the
surgeon determine the exact location of the tumor so that “Burr Down Resection” with a
dental type drill can be performed more easily and accurately. This is to prevent the tumor
from being missed during the surgery. There are also many more potential complications
with this procedure than with RF ABLATION. Although the procedure is less invasive than
the surgical procedure described above, it is still associated with an incision, blood loss,
higher risk of infection compared to RF ABLATION. It may also require fixation of the
bone to prevent fracture (not as often as surgical procedure described above). It usually does
not require bone grafting. There is prolonged recuperation, hospital stay, postoperative pain
and rehabilitation compared to RF ABLATION.
An Osteoid Osteoma is not a malignant or cancerous tumor. It also does not usually grow
more than 2 centimeters and therefore does not destroy the bone from which it arises. It is
therefore not absolutely necessary to remove or invasively treat the tumor if pain medication
works in relieving the pain. The only reason to treat the tumor is for pain relief. In this
situation the tumor would be observed with periodic X-rays and CAT scans. The tumor may
spontaneously disappear or resolve. This usually takes at least a few years. The patient would
be treated with a non-steroidal anti-inflammatory medication like naprosyn, motrin, aspirin
or ibuprofen for this time period. The pain often lasts for years. Some patients have reported
pain for over 10 years. Treatment with pain medication is therefore usually for a prolonged
period and patients usually require the pain medication for 24 hours a day. I have had
patients who have been treated in this manner, including children, who have developed
gastric ulcers and kidney failure. In addition, parents usually complain that despite the pain
medication, their children still wake up at night and do not have a peaceful night of sleep. It
is also difficult for parents to make sure that the child is getting the pain medication in
school. Thus, when the pain medication wears off, the child is in pain. This causes
difficulties with school and with interacting with other children. The sleeping difficulties
further complicates their school related activities and learning.
What are the risks associated with Radiofrequency Ablation?

Infection----less than 1% risk
Persistent Pain or Failure to Eradicate the Tumor Completely: A second RF Ablation
procedure or a surgical procedure may be required.
Recurrence of the Osteoid Osteoma: The tumor may come back up to two years after the
procedure. This is unusual (less than 10% chance) but the patient needs to be monitored
after the procedure. The patient will begin to experience the pain again if the tumor comes
back (recurs). Please note: there will always be a persistent scar in the bone that can be seen
on an X-ray after the procedure.
Skin Burn: This is a rare event however osteoid osteomas that are adjacent to the skin may
predispose the skin to a small burn. Care is taken to ensure that the probe is buried within
the nidus to minimize the risk of a burn.
What do I need to do if I have been diagnosed with an Osteoid Osteoma and I want
to have Radiofrequency Ablation performed?
You should set up an appointment to see Dr. James C. Wittig, Orthopedic Oncology, to ensure that you have had all the appropriate tests needed to diagnose the Osteoid Osteoma. You will need to be examined and all of the actual radiological studies will need to be reviewed by Dr. Wittig. If Dr. Wittig agrees with the diagnosis he will schedule you for the procedure with one of the radiologists whom he works closely with and who has experience with radiofrequency ablation. Dr. Wittig will need to keep your radiological studies to discuss them with the radiologist* * Special thanks to musculoskeletal radiologists Leon Rybak and George Nomikos for helping to develop this informational section on osteoid osteoma and radiofrequencey ablation.

In defense of metaphor

IN DEFENSE OF METAPHOR "That's how they all squeal at first," he said. "As if the world could be changed without killing someone."Friedrich Dürrenmatt, Grieche sucht Griechin Mephistopheles: No Lord, I believe that, as always,A few years ago, the papers announced that the government ofSouth Africa was going to set up a programme to import and producelow-cost drugs to trea