Gunshot injuries of the spine – a review of
49 cases managed at the Groote Schuur
Acute Spinal Cord Injury Unit
Registrar, Department of Orthopaedics, Stellenbosch University R. N. DUNN, M.B. CH.B., M.MED. (ORTH.), F.C.S. (S.A.) (ORTH.) Head of Spinal Services, Division of Orthopaedics, University of Cape Town dence of gunshot injuries. The Groote Schuur Trauma Unit sees between 70 and 120 gunshot injuries a month. Many ofthese involve the musculoskeletal system, and some the The Acute Spinal Injury Unit, relocated from Conradie spine. This is in stark contrast to the European experience.
Hospital to Groote Schuur Hospital in mid-2003, admit- Of 34 903 trauma cases seen in Scotland over 28 years there ted 162 patients in the first year of its existence. A large was only 1 case of gunshot injury of the spine.1 number of these injuries were the result of interpersonal The Acute Spinal Cord Injury Unit (ASCI), previously violence, particularly gunshot wounds.
based at Conradie Hospital, was relocated to Groote Schuur Aim. To review patients with gunshot injuries to the Hospital in 2003 as part of the government’s 2010 plan.
spine, with reference to neurological injury, associated This unit manages spinal cord injuries from the region on a injuries, need for surgery and complications.
referral basis. During the first year of opening, 162 patients Methods. A comprehensive database is maintained to were admitted with various spinal injuries. A large propor- collect data on all spinal injury admissions. These data, tion of these were gunshot injuries of the spine.
as well as case notes and X-rays, were reviewed for all A review of this subset of patients is presented.
gunshot spine patients admitted to the Acute SpinalInjury Unit over a year.
Forty-nine patients were identified. Thirty-eight were male and 11 female with an average age of 27.5 years(range 15 - 51 ± 8.53). The average stay in the acute All admissions to the ASCI unit are entered in a database.
Included in the data recorded is the mode of injury and the Results. The spinal injury was complete in 38 and neurological status. The latter is classified according to the incomplete in 8, with 3 having no neurological deficit.
American Spinal Injury Association (ASIA) scoring system, The level was cervical in 13, thoracic in 24 and lumbar in with motor function attributable to C5 - T1 and L2 - S1 12. Only 9 patients improved neurologically. The spine roots allocated a score between 1 and 5 based on the was considered stable in 43 cases. Stabilisation was Medical Research Council (MRC) power. This is done performed in the 6 unstable cases. The bullets were bilaterally. In addition sensation is scored in a similar fash- removed in 11 cases as they were in the canal.
ion on a provided form. The subsequent management, com- There were 55 significant associated injuries, viz. 14 plications and discharge neurological status are also haemo-pneumothoraces, 16 abdominal visceral injuries, 3 vascular injuries, 4 injuries of the brachial plexus and 3 Patients with gunshot injuries of the spine were identified of the oesophagus, 2 tracheal injuries, 1 soft palate from this database. Their case notes and X-rays were reviewed retrospectively, with a view to procedures per- Complications included 3 deaths and discitis in 3 formed, complications and neurological change. The cases, pneumonia in 6 and pressure sores in 6.
patients referred to the local rehabilitation service were Conclusion. Gunshot injuries of the spine are a preva- reviewed for further change in neurological status.
lent and resource-intensive cause of paralysis. There is A total of 49 patients with gunshot injuries of the spine a high incidence of permanent severe neurological were identified. Of these, 47 were from the ASCI service deficit, but usually the spine remains mechanically sta- and 2 from the adjacent private facility (University of Cape ble. Most of the management revolves around the asso- ciated injuries and consequences of the neurological All the injuries were from low-velocity weapons, as is typi- cal for our population. The most frequent calibre was 9 mm.
Of the 49 patients, 38 were male and 11 female. The aver- With the high level of crime in the Western Cape, the state age age was 27.5 (15 - 51 ± 8.53) years. The average in-hos- hospitals have witnessed a tremendous increase in the inci- pital stay was 30 (4 - 109 ± 28) days. Once the acute 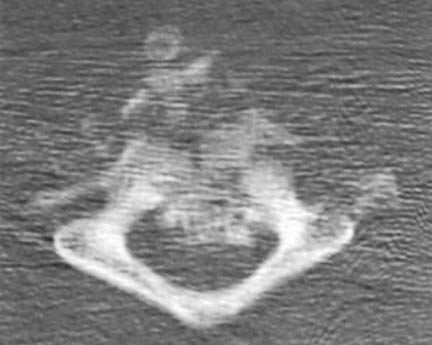 management was completed patients were discharged orreferred to the rehabilitation service depending on their neu-rological status. The rehabilitation service required patientsto be free of pressure sores before admittance. This led tosome of the prolonged hospital stays.
Neurological status
The anatomical level and neurological status of the spinalinjuries are tabulated in Table I. The vast majority werecomplete neurological injuries, with no incompletes in thethoracic group. Only 9 patients improved neurologically.
Three cervical completes regained 5 - 7 ASIA motor points.
This represents a single level of improvement, and probably Fig. 1. CT scan of comminuted body regarded as
indicates root escape rather than true cord recovery. One unstable.
complete patient regained 10 motor points and good sensoryrecovery.
Bullets in the canal
Of the 4 cervical incomplete injuries, 1 patient with no bony fracture recovered spontaneously. This was thought to The bullet was found to be in the canal in 12 cases – 1 cervi- be because of cord contusion as the bullet did not violate the cal, 4 thoracic and 7 lumbar. One patient absconded for canal or column. Another patient improved from a total of fear of retribution. The rest underwent surgery to remove 85 motor points to 98 at 3 months. This patient had a body fracture. None of those who recovered had violation of theircanals.
Associated injuries
There was no recovery in the thoracic group.
Three patients improved in the lumbar injury group. One There were many associated injuries, as listed in Table II.
patient improved from 70 to 88 motor points, then Of the 4 brachial plexus injuries, 3 were related to the cur- plateaued. This patient is now ambulatory with crutches.
rent injury and 1 to a previous gunshot wound. The latter Another had a 5-point improvement. Both of these were patient’s current injury was thoracic, and the brachial plexus incomplete injuries. Another patient judged on admission to injury was only explained when the X-ray revealed a previ- have a complete lumbar injury had return of distal motor ous bullet near the plexus. There was a high incidence of function after removal of the bullet.
associated chest trauma, with 14 cases having haemotho-races, pneumothoraces or lung contusions. These required Stability
intercostal drains to be inserted. There were 2 vertebralarterial injuries, one arteriovenous fistula requiring repair The injury involved the posterior elements in 25 cases, the and an axillary artery also requiring repair. Laparotomies body in 15 cases, and both in 2. There were no fractures in were performed in 9 patients for visceral injuries (Table III).
Our assessment of stability was based on the three-column system of Denis,2 as described for thoracolumbar fractures TABLE II. ASSOCIATED INJURIES (N)
from indirect forces. This was modified by the realisation Tracheal
that gunshot injuries are different to indirect forces, as they Oesophageal
are not associated with posterior column ligamentous Soft palate (Fig. 2)
injuries. Six patients were assessed as unstable. This was Brachial plexus
usually based on severe comminution of the anterior column Pneumo-/haemothorax
(Fig. 1), where it was felt that progressive kyphosis would Non-spinal fractures
occur. Three patients had cervical and 3 had thoracolumbar Vertebral artery
injuries. The cervical injuries were fused anteriorly by Axillary artery
means of an autogenous bone graft and plate, whereas the Liver, spleen, pancreas
thoracolumbar injury patients underwent posterior pedicle Diaphragm
TABLE I. NEUROLOGICAL STATUS PER
ANATOMICAL LEVEL.
TABLE III. ABDOMINAL SURGERY (N)
Splenectomy
Incomplete
Bowel repair
Complete
Loop colostomy
Hemicolectomy
improved
Renal stent
*Parentheses indicate number of patients with neurological improvement.
Nephrectomy
166 VOL 43, NO. 4, NOVEMBER 2005 SAJS 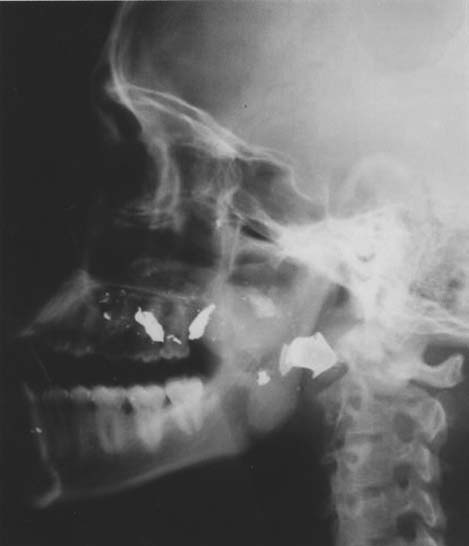 Introduction In general, there is a paucity of research in the field of pediatric psychopharmacology. Many practices are considered “off-label,” meaning there is no FDA approval. This is also true of many non-psychiatric medications and their uses in children (perhaps half or more medication interventions in children are “off-label”). This does not mean that such practices are not supp