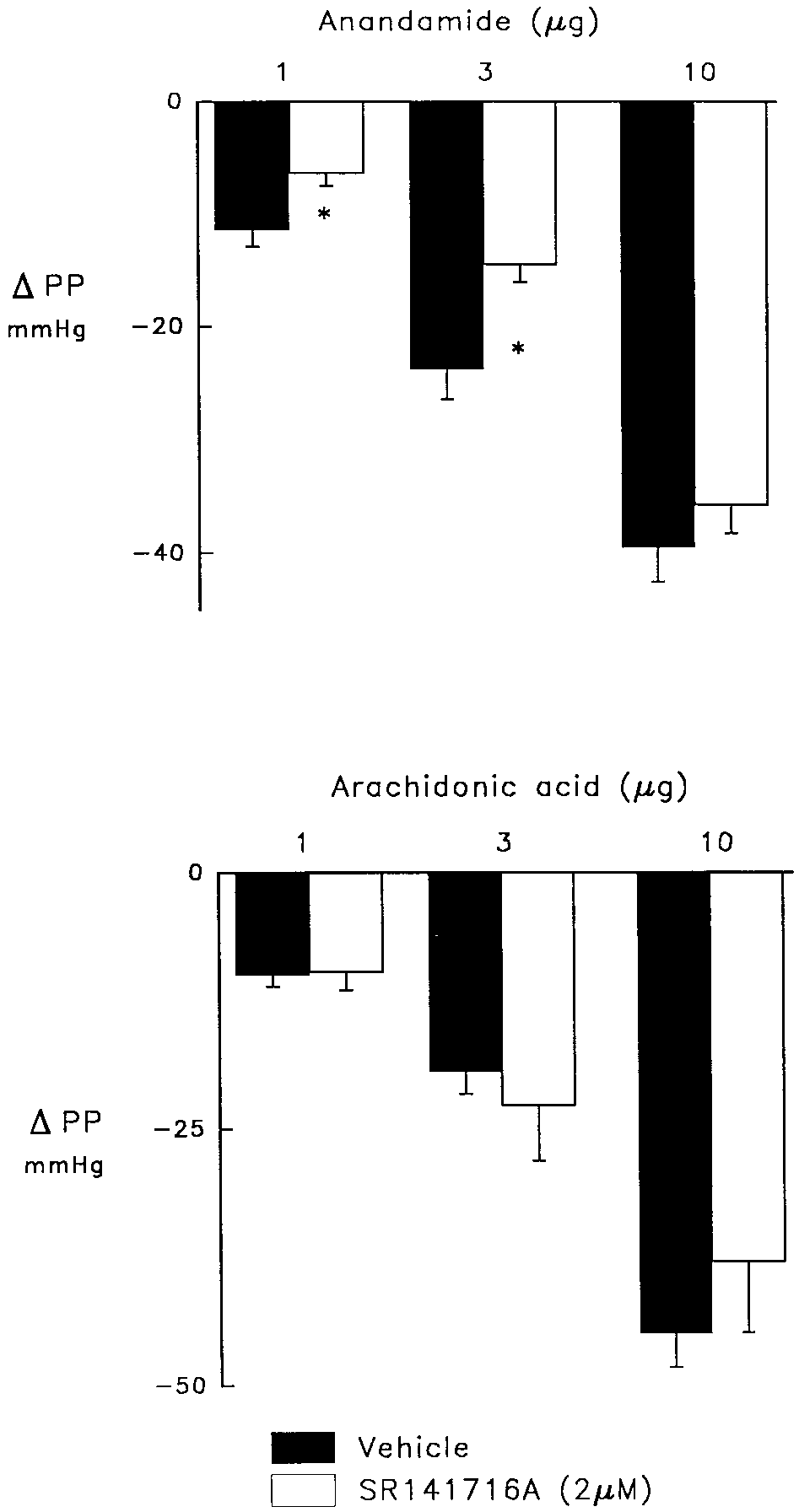 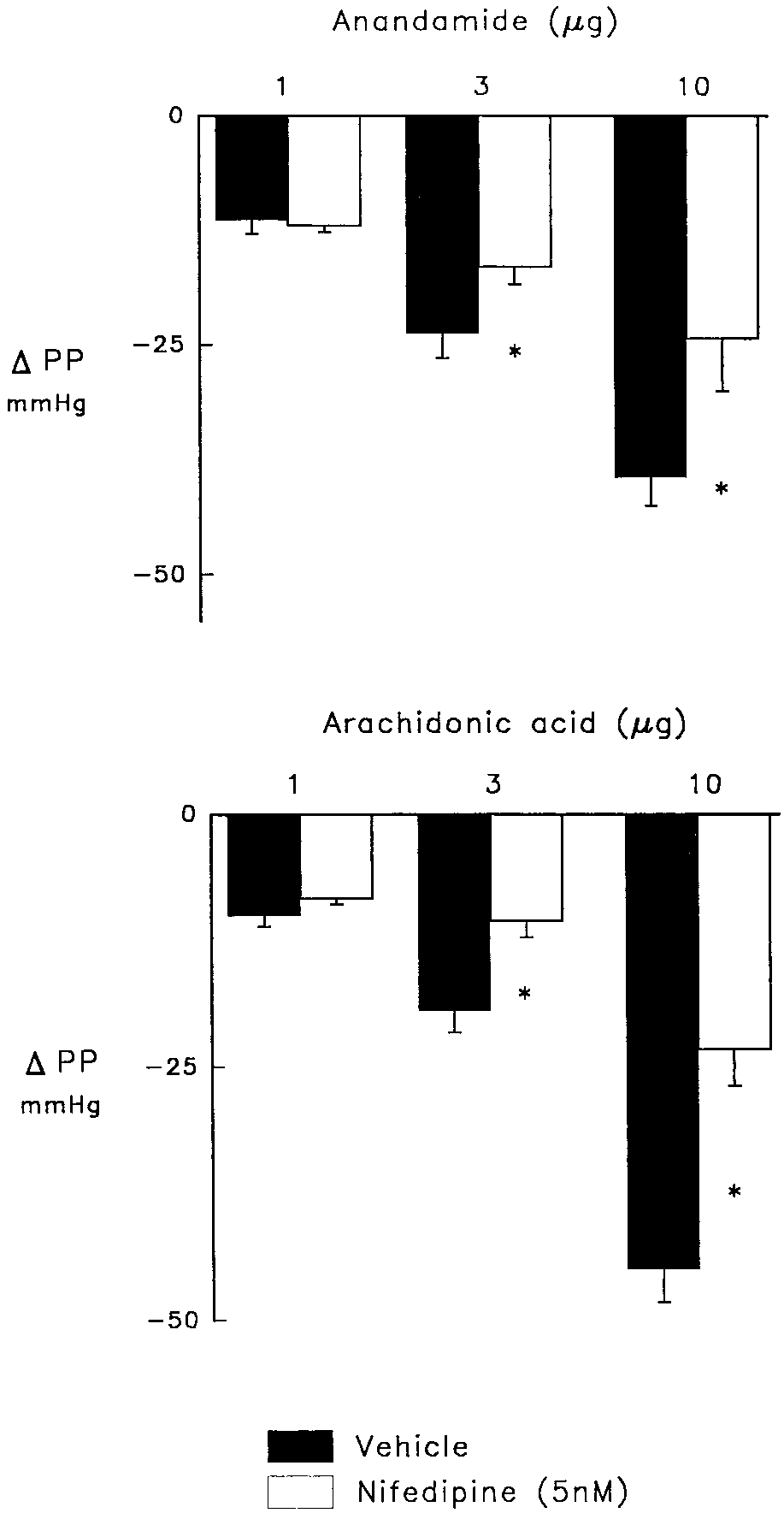 Fulton and Quilley
mmHg. Elevated perfusion pressures were comparable in all Inhibition of voltage-dependent Caϩϩ channels with nifed- the groups except the charybdotoxin group where pressure ipine diminished the vasodilator effects of 3 and 10 ␮g anan- was further increased by inhibition of Caϩϩ-activated Kϩ damide (P Ͻ .05) and AA (P Ͻ .05) to a similar degree without channels to 155 Ϯ 4 mmHg compared to 134 Ϯ 2 mmHg for affecting the responses to the lowest doses of these agents vehicle, 138 Ϯ 3 mmHg for SR 141716A and 131 Ϯ 6 mmHg Inhibition of Caϩϩ-activated Kϩ channels with charydo- In the vehicle control group, 1, 3 and 10 ␮g anandamide toxin did not reduce the coronary vasodilator response to elicited dose-dependent falls in perfusion pressure of 11 Ϯ 2, anandamide (fig. 3), rather, the response to the lowest dose of 24 Ϯ 3 and 40 Ϯ 3 mmHg, respectively (fig. 1). The cannabi- anandamide was slightly increased from 11 Ϯ 2 to 16 Ϯ 2 noid receptor antagonist, SR 141716A, reduced the coronary mmHg (P Ͻ .05). In contrast, the coronary vasodilator effect vasodilator response to the two lower doses of anandamide, of AA was significantly reduced in the presence of charydo- 6 Ϯ 1 and 15 Ϯ 2 mmHg (P Ͻ .05), but was without effect on the highest dose, 36 Ϯ 3 mmHg. In contrast, the dose-depen- In the second series of experiments to determine the effects dent coronary vasodilator response to AA was unaffected by of SR 141716A on vasodilator responses to bradykinin and SR 141716A (fig. 1). SR 141716A did not affect vasodilator cromakalim, basal and elevated perfusion pressures in the responses to nitroprusside, 37 Ϯ 4 vs. 44 Ϯ 7 mmHg for the control and treatment groups were 34 Ϯ 2 and 134 Ϯ 6 Fig. 2. Vasodilator responses to anandamide (upper panel) and arachi-
donic acid (lower panel) in control hearts (solid bars) and in the presence
Fig. 1. Effect of the cannabinoid receptor antagonist, SR 141716A, (2 ␮M;
of nifedipine (5 nM; open bars). Heart were treated with indomethacin open bars) or vehicle (solid bars) on vasodilator responses to anandamide (2.8 ␮M) and nitroarginine (50 ␮M) to inhibit cyclooxygenase and NO (upper panel) and arachidonic acid (lower panel) in the rat isolated synthase and elevate perfusion pressure from 30 – 40 to 130 –140 mmHg.
perfused heart treated with indomethacin (2.8 ␮M) and nitroarginine (50 Nifedipine reduced elevated perfusion pressure that was restored with ␮M) which elevated perfusion pressure from 30–40 to 130–140 mmHg. 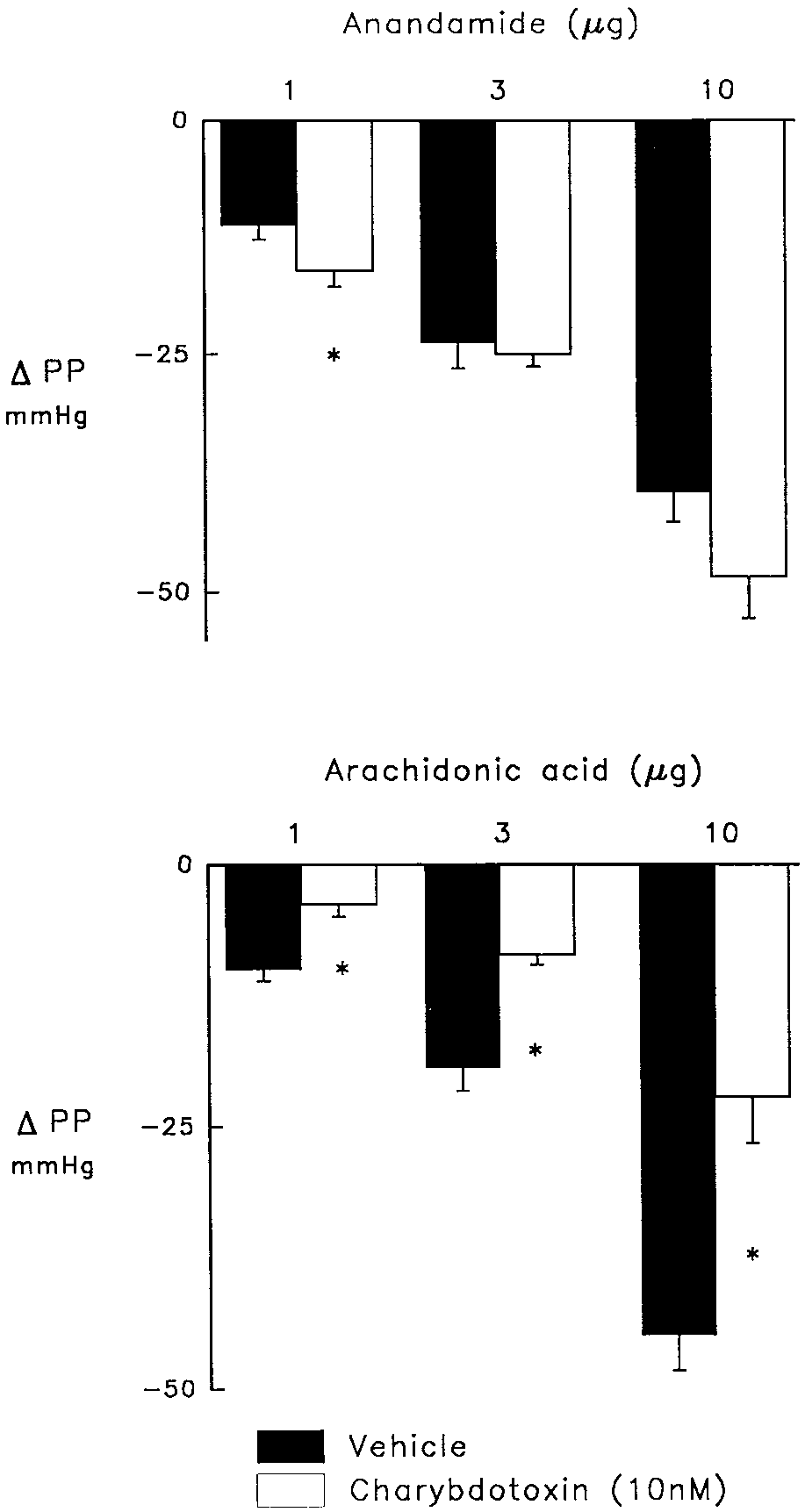 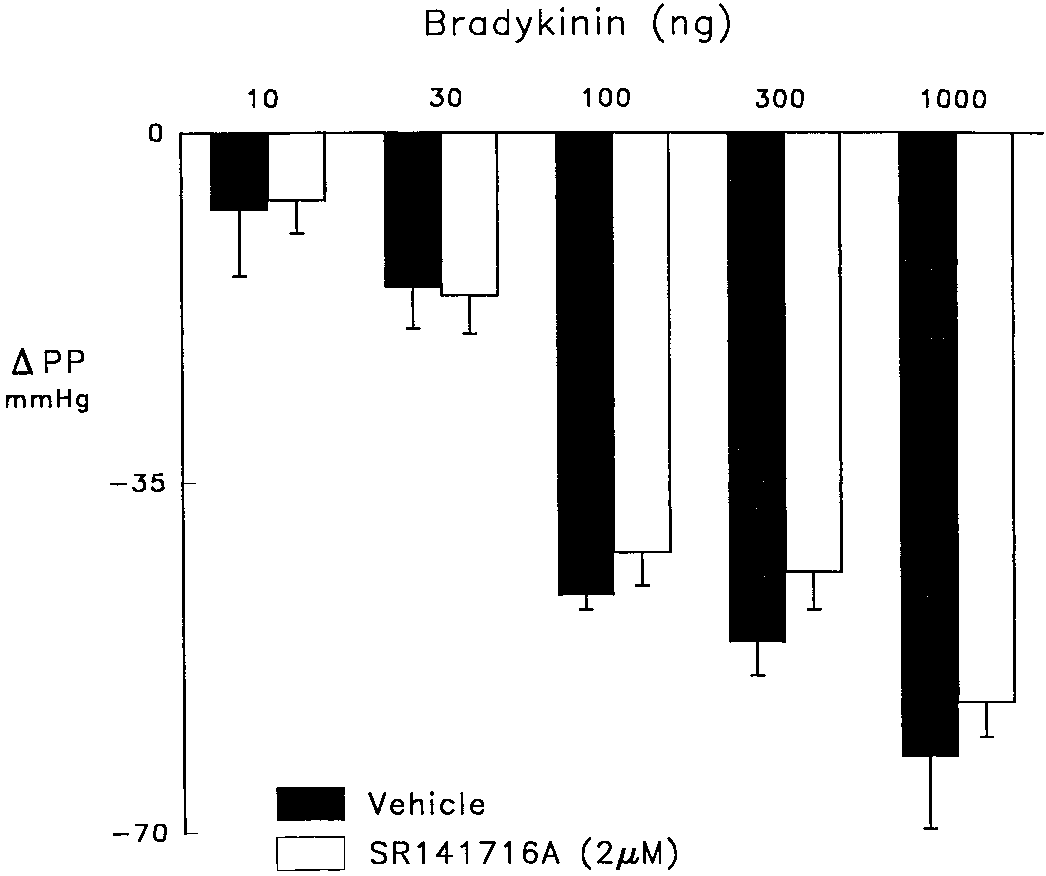