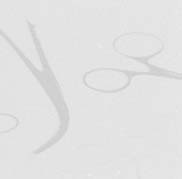 SCAR FORMATION
KEY FIGURES:
This chapter gives background information about the scarring process.
Treatment options for problematic scars are also discussed.
Normal Course of Scar Maturation
Scar tissue is never as strong as normal, uninjured skin. For the first3–4 weeks after injury, the wound can easily be reopened by minimaltrauma. By 6 weeks, the scar has attained approximately 50% of itsfinal strength. During the next 12 months, the scar gradually increasesits ability to withstand injury, but it never attains normal strength.
The period of maximal collagen production (the primary component ofskin and scar tissue) is the first 4–6 weeks after a wound has closed.
During this period the scar may appear red and be slightly firm andraised.
Over the next several months, changes in the rate of collagen produc-tion and degradation occur. Normal healing results in normal typesand amounts of collagen in the area. On the surface, normal healing isillustrated by the fading of redness and softening of the scar. I usually tell patients that it will take at least 1 year for the scar toachieve its final appearance. Scars in children may continue to changeand improve for several years. 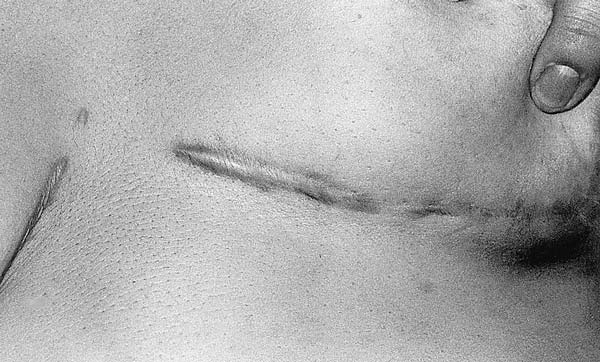 Practical Plastic Surgery for Nonsurgeons Abnormal Scarring
For various reasons, such as genetics, nature of initial injury, or badluck, some scars become exceptionally red, thick, and tight. Such scarscan be problematic on the hand or other flexor surfaces, because theymay lead to limitation of movement and loss of function.
Hypertrophic scars are a bit thicker and redder than the fine scar that
usually results after primary healing. At the extreme, scars may
become keloids—that is, they may enlarge beyond their initial area.
Keloids can become large and unsightly. They also can cause annoying
symptoms, such as itching and pain.
Typical hypertrophic scar. Note that the scar is thick and raised but still withinthe confines of a normal scar.
In addition, the scar may be unstable. An unstable scar is easily rein-
jured with minimal trauma; it heals but is easily injured again. This
cycle can go on for years and ultimately result in the development of
an aggressive form of skin cancer.
Abnormal scarring is usually the result of abnormal collagen produc-tion and degradation. Although we do not know the exact cause ofthese abnormal processes, the manner in which a wound is closed mayplay a role. In addition, there are interventions that can improve an ab-normal scar.