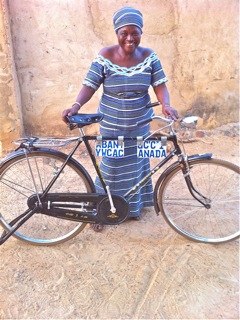 Bicycles Help Win 3 Seats for Women in Ghanaian District Assembly - Y Blog - YWCA Canada Y BLOG
Y Blog
Bicycles Help Win 3 Seats for Women in Ghanaian District Assembly
July 11, 2011 by Paula Stromberg inthe Upper West Region including three in while the last election in 2006 saw justone female candidate. The ten female candidates were given bicycles to help them campaign inremote towns around the regional capital of Wa, in Ghana. Bicycles enabled them to distributecampaign flyers in rural areas and discuss problems with local people in a bid for votes in theDistrict Assembly elections.
The Bicycles for Ballots project was part of practical election support that ABANTU for Developmentimplemented for female candidates in the Upper West Region. Helen Koranten, Executive Directorof the Centre for Rural Women Empowerment and Development, identified female candidates forthe District Assembly elections, facilitated training workshops for women across the politicalspectrum and arranged the collaboration to supply ten bicycles for candidates’ election campaigns. “Women used their new bicycles to reach voters in distant places. Roads in our area are just Bicycles Help Win 3 Seats for Women in Ghanaian District Assembly - Y Blog - YWCA Canada footpaths through the hinterlands, quite inaccessible to cars,” she explained. “Without bicycles, theywould have struggled getting from village to village.”One of the successful District Assembly candidates, Stella Porekuu, a kindergarten teacher, toppedthe polls with 199 votes, while her two male competitors received only144 and 80 votes. It was atough fight, especially due to her lack of funds, as she remarks, “One of my male opponents is rich. This is a newly-created district and people are very poor. If you campaign for election and don’t givethem something, at least some water to drink, they imagine you are powerless to achieve anything. They won’t bother voting for you.”Porekuu thinks help from YWCA Canada, ABANTU for Development and dozens of other NGOshave helped women understand the importance of voting. “Women are getting educated anddeveloping our minds. The number of female voters is increasing.”Landslide victories could be driving home the message for women. With 462 votes, compared to hermale opponent’s 103, Virginia Saaliboh had a decisive triumph. “During my campaign, women’sgroups assured me of victory. Many women came out to vote,” said Saaliboh from the Baseableelectoral area in the Lawra District, about 54 kilometres from Wa.
Fabiana Kavaarpuo, a first-time candidate, says that her community’s major problem is poverty. “For the first time in my area, people were ready to give a woman their votes. Women voters sawanother woman trying to help them. Girl children drop out of school here so I hope to be a rolemodel for them.”Fundraising for an election campaign or any kind of development is always a challenge, especiallyfor women and their families. More women need to get into decision-making structures fromgrassroots to the national level. Poverty cannot be eliminated without gender equality principles. “With help from partner collaborations, we increase rural women's visibility in politics,” concludesHelen Koranteng.
This is a guest blog by Paula Stromberg, whose story writing, newspapers, photography and artdesigns have won more than 50 national and international awards. A professional writer, newspapereditor, business and labour journalist, she has also published essays, poetry and short stories. Formore information, visit her & blog.
2011 YWCA Canada.
A Turning Point for Women.
Un point tournant pour les femmes.
Content produced in accordance with YWCA Canada policy.