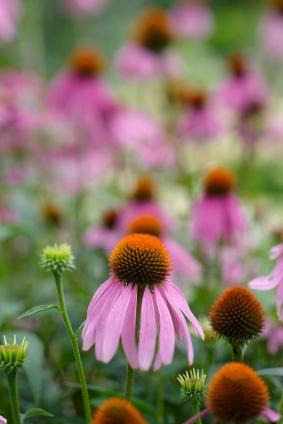 Winter’s Arsenal “Echinacea”-Yvonne Lunt Salcido M.H.
With the beginning of winter upon us, getting a jump start to insure a healthy season is a sensible thing to do. Echinacea augustifolia (latin Gensus,species)or Echinacea purpurea, more commonly known as Echinacea, is a miraculous plant who’s root can aid in the pursuit of a healthy winter. This American native root has been used by the American Indian for centuries. It is the best immune booster we have growing here. It was one of the most widely used herbs by many tribes. The Cheyenne used the leaves and roots for gums, sore throats and the mouth. The Comanche used the root for sore throats, toothaches, colds, and colic. The Sioux used fresh root to aid in septic conditions and hydrophobia. The Montana Indians used it for snake bites. Many other tribes used the plant for a variety of illnesses. Early settlers in America followed the example of the Indians and discovered the wonderful healing properties of Echinacea. Some of the common names they called it were Indian head, purple coneflower, scurvy root, red sunflower, comb flower, and Black Sampson. In the late 1800’s some studies and claims were made by a Dr. H. F. C. Meyers who used it for sixteen years in his practice. He claimed it was excellent for blood poisoning and an antispasmodic. His research showed it to be one of the best remedies for snake, spider, scorpion, bee and wasp stings or bites. Because of the wonderful blood purification properties it has been used for septic conditions. In the book “Herbal Syllabus” by Dr. John R. Christopher, Dr. Christopher tells of a case where: “A crushed hand, thought to be beyond aid, with the intolerable stench of putrid flesh, was saved by the application of Echinacea. It was also used in cases of cerebrospinal meningitis because of its pain-relief and because this malady is caused by general sepsis.” Research by a Professor Webster, an early researcher of Echinacea, stated that it was a stimulant to capillary circulation giving the vessels the ability to recuperate by resisting inflammation due to debility and blood depravation. This herb is a strong anesthetic for a local area. When applied externally to wounds and painful swellings it offers quick relief of pain. When taken in the mouth it has a numbing sensation. It is important to note that it should be taken for seven to ten days, rest for the same amount of days, then you can resume taking it. Dr. James Duke states “I’ve been very impressed with German research showing that its antimicrobial action helps prevent and treat colds, flu and all sorts of other viral, bacterial and fungal infections.” Success has also been seen with anti- aging properties, athletes ’foot, bladder infections, breastfeeding problems, burns, bursitis, chronic fatigue syndrome, dry mouth, earache, gingivitis, herpes virus, HIV infection, laryngitis, Lyme disease, pneumonia, sinusitis, sties, tendinitis, tonsillitis, tuberculosis, viral infection, wound, and yeast infections. So don’t forget to keep the Echinacea on hand this winter and you will have a healthy and happy winter. Yvonne Lunt Salcido is a Student Advisor for and a Master Herbalist Graduate of the School of Natural Healing. She is a current student at Utah Valley University majoring in Health and Wellness Education.

Netta OR Soprano Netta Or was born in Israel, she studied at the Music High School in Cologne with Prof. Leisenheimer and joined master classes of Kurt Moll and Joan Dorneman, already with ten years she sang smaller roles like 1° Knabe in „Zauberflöte“ and appeared in „Macbeth“ at the theatre of Aachen . First guest contracts brought her to the theatre in Bonn as Serpina in