Neurol Med Chir (Tokyo) 50, 622¿626, 2010 Intravenous Methylprednisolone Reduces the Risk of Propofol-Induced Adverse Effects During Wada Testing Nobuhiro MIKUNI, Youhei YOKOYAMA, Atsuhito MATSUMOTO, Takayuki KIKUCHI, Shigeki YAMADA, Nobuo HASHIMOTO*, Department of Neurosurgery, Kyoto University Graduate School of Medicine, Kyoto; *National Cerebral and Cardiovascular Center, Suita, Osaka The adverse effects and risks associated with intracarotid propofol injection during Wada testing wereretrospectively compared in two groups of patients with (n ＝ 75) and without (n ＝ 58) intravenousmethylprednisolone administered before intracarotid propofol injection. The incidences of all adverseeffects were decreased in the methylprednisolone group. In particular, severe adverse effects such as in-creased muscle tone with twitching and rhythmic movements or tonic posture, which could adverselyaffect Wada test results, were seen in one patient in the methylprednisolone group and seven patients inthe control group, indicating 92% risk reduction. This study suggests that Wada testing using in-travenous methylprednisolone administration prior to propofol injection is a safe approach to thepreoperative evaluation of brain tumors, epilepsy, and arteriovenous malformations.
The Wada test, a direct intracarotid amobarbital in- jection that induces transient anesthesia in a singlecerebral hemisphere,11) has been the gold standard The clinical records were retrospectively examined for lateralization of hemispheric speech and memo- of all 75 patients (44 men and 31 women), aged 10 to ry dominance. Although amobarbital has been com- 74 years, who underwent the Wada test from 2006 to monly used for this purpose, its limited availability 2008 as part of a preoperative examination. The due to worldwide shortages has led to the explora- population included 43 patients with brain tumors, tion of alternative agents such as propofol,10) metho- 18 patients with temporal or frontal lobe epilepsy, hexital,2) and etomidate.6) We have previously report- and 14 patients with arteriovenous malformations ed the clinical utility of an intracarotid propofol test (AVMs). Fifty-eight patients who underwent the for speech and memory dominance with a moderate- Wada test from 2001 to 2005 using intracarotid ly high risk of adverse effects.8) Previous research has suggested that propofol infusion is likely to formed the control group in this study. Adverse ef- cause a considerably high incidence of adverse ef- fects of the control group were reported previously.8) fects, although no data on adverse effects for None of the patients had received steroids before the amobarbital equivalents has been provided.5) The present study evaluated the efficacy of The methylprednisolone group received an in- methylprednisolone for improving the safety of travenous bolus injection of 500 mg (or 250 mg for propofol administration during the Wada test by children 15 years of age and younger) methylpred- comparing outcome measures of 75 patients who nisolone at most 5 minutes prior to propofol ad- received methylprednisolone (methylprednisolone ministration. The Wada test was then performed group) to those of 58 patients who did not (control using the propofol-based protocol reported previous-ly.8,10) Propofol was administered as a 10 ml saline suspension at a concentration of 1 mg/ml. If this dose did not induce contralateral hemiplegia, addi- Intravenous Methylprednisolone During Wada Testing tional propofol was injected immediately, up to a eye version. Grade 3 adverse effects included in- maximum dose of 15 mg in one side. All patients in creased muscle tone with twitching and rhythmic both groups received equal total propofol injection movements or tonic posture. To evaluate the poten- volumes bilaterally except for one patient in the con- tial risks of propofol injection, the odds ratios and trol group who suffered strong adverse effect after 95% confidence intervals (CIs) associated with vari- the first propofol dose, and so did not receive a sec- ous demographic variables were calculated, such as ond injection. Total propofol injection volume (me- sex, age, history of convulsions, lesion type, lesion an ± standard deviation) was 22.7 ± 3.8 mg in the laterality, laterality of language function, relation- methylprednisolone group and 20.8 ± 3.7 mg in the ship between the laterality of the lesion and the lan- guage center, and injection volume (total, first injec- Clinical characteristics of the two groups were tion, and second injection), using SAS version 8.2 compared using the x2 test at a significance level of p software (SAS Institute, Cary, N.C., U.S.A.). P values º 0.05. The results showed no significant difference less than 0.05 were considered to be statistically sig- in underlying disease, sex, history of epilepsy, lesion nificant in each analysis, whereas p values equal to laterality, speech dominance, or mean age, indicat- 0.05 were considered to indicate marginal risks.
ing the control group was appropriate (Table 1).
The adverse effects following propofol injection were grouped into three categories as previouslymentioned.8) Grade 1 adverse effects included eye In the methylprednisolone group, 9 of 75 patients ex- pain, shivering, face contortion and lacrimation, perienced adverse effects, all of which were ob- laughing, or apathy. Grade 2 adverse effects consist- served immediately after propofol injection. In all of ed of confusion, involuntary movement, or head and these patients, symptoms disappeared within 5minutes of injection, and were mild enough to allowcontinuation of the Wada test as usual. In the control group, 19 of 58 patients had adverse effects. The in- cidence in the methylprednisolone group was sig- nificantly lower, with an odds ratio of 0.280 (95% CI: 0.115–0.679, p ＝ 0.0036), yielding a 72% risk reduc- Analysis of the incidence of individual signs and symptoms found that the methylprednisolone group included 1 epilepsy patient with tonic posture (con- trol group 3 patients) and no patients with increased tone with twitching (control group 4 patients) (Fig.
1). These results indicated a significant reduction in Grade 3 adverse effects in the methylprednisolone group, with an odds ratio of 0.084 (95% CI: 0.010–0.712, p ＝ 0.0052) and a 92% risk reduction (Table 2). The methylprednisolone group included no patients with involuntary movements and 1 with head and eye version, demonstrating a marked *Excludes one patient who stopped the examination and reduction in Grade 2 adverse effects compared with the control group, in which 2 patients showed in- malformation, SD: standard deviation.
voluntary movements and 5 exhibited head and eye Adverse effects of intracarotid propofol injection 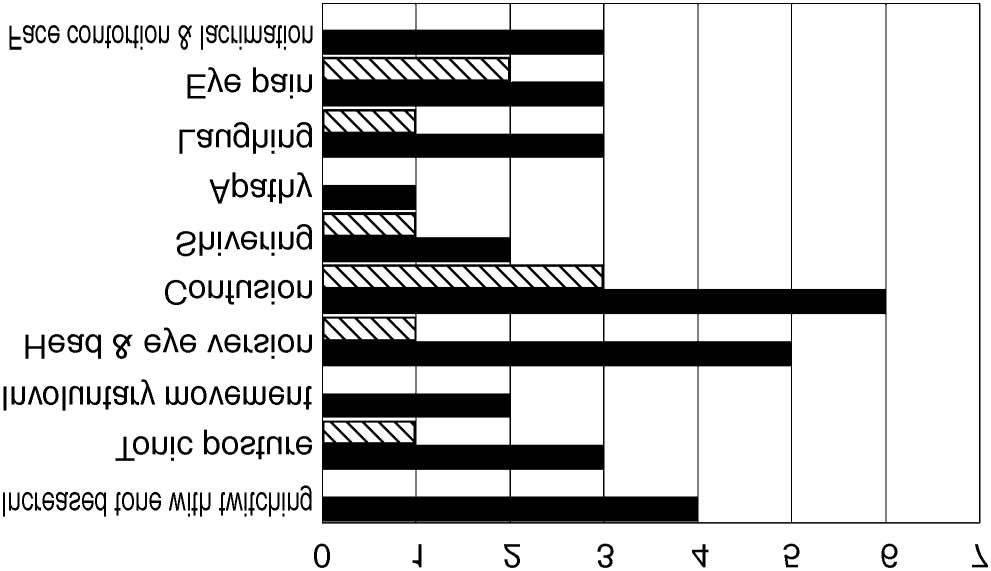