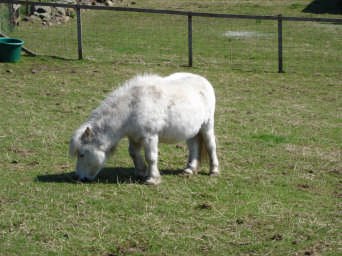 Some ponies seem to get grossly overweight on nothing but fresh air and new thinking suggests
that a condition called Equine Metabolic Syndrome may be responsible
Anyone who has owned a native pony will be familiar with its ability to create fat out of thin air, and with thedifficulties in management this causes. Now at last, as a result of work done at the University of Missouri, acondition called Equine Metabolic Syndrome (EMS) has been recognised.
This condition may explain why domesticated ponies are so prone to obesity and laminitis, and is possiblythe result of evolutionary developments that enable native breeds to survive harsh weather and food short-ages. In the wild, ponies are programmed to put on weight during the relatively lush summer and autumnmonths, with fat (stores of energy) distributed around the body in preparation for leaner times. Significantly,fat is preferentially laid down in the abdomen, where it is known as omental fat.
Until recently, it was thought that these fat cells (known as adipocytes) were just benign stores of energy.
But research has shown that adipocytes are in fact active and can pro-duce a variety of hormones known as adipokines. These help controland regulate a number of body processes and are programmed towardsenhancing our native ponies' ability to endure periods of environmentalharshness. It appears that the omental adipocytes produce an especiallysignificant range of adipokines that, among other things, generate anincrease in the level of circulating cortisol. This steroid is instrumental ininhibiting the action of the hormone insulin (which controls blood glucoselevels), and results in insulin resistance and a degree of hyperglycaemia.
In relatively fat ponies entering the winter months, this insulin resistancehas a physiological benefit. It preserves and prioritises glucose (andtherefore energy) for essential areas such as the brain, at the expense ofnon-essential tissues like muscle. As the pony gradually loses weight during the winter, so the level ofomental fat reduces and the state of insulin resistance becomes reversed. Eventually, spring arrives andthe pony is in a lean but healthy condition — ready to indulge safely in the pleasures of rich grazing.
Unfortunately, this system has become unbalanced as a result of domestication. It has meant that the av-erage equine diet is too rich and too plentiful. Grain-based feeds tend to be the main culprit, but even hayand other forages are now made from improved pastures and so have a high nutritional value.
Many ponies enter the winter in an over-fat state and maintain this level of condition, so the state of insulinresistance is not reversed. Long-term insulin resistance has various undesirable consequences, which in-clude chronic hyperglycaemia and hyperinsulinaemia (high blood glucose and insulin levels respectively).
Ultimately, a condition of glucotoxicity (too much sugar) arises and this significantly increases the risks oflaminitis developing.
"Metabolic syndrome" has been used to describe this scenario. It is well recognised in humans, wherethere is a very obvious link between obesity and cardio-vascular disease. Human glucotoxicity causes anincrease in blood pressure (hypertension), which predisposes to coronary disease — and also insulin-dependent diabetes mellitus (due to the exhaustion of the pancreas's insulin-secreting abilities).
It is thought that hypertension in ponies could predispose them to laminitis rather than heart disease —and a state of diabetes mellitus is recognised but tends to be insulin-dependent because there is no evi-dence that the pancreas becomes exhausted.
EMS has many characteristics similar to Cushing's disease, which is why it has often been termed"peripheral Cushing's disease". However, this is misleading because there is nothing wrong with the pitui-tary or adrenal glands in cases of EMS, as there is with Cushing's.
Referring to it as the "laminitis-hypothyroidism syndrome" is also inaccurate because there is no evidence 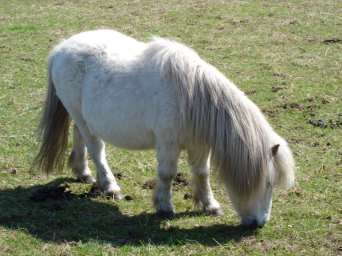 of any thyroid malfunction. Other names include "obesity-related laminitis", "equine syndrome X" and"insulin resistance syndrome" — but EMS is now universally preferred.
EMS can be difficult to recognise because the signs are often very subtle and it can be confused withCushing's or even hyperthyroidism. In general, EMS is seen in ponies, cobs and warmbloods under15 years of age, whereas Cushing's tends to affect older equines of any age.
Common signs of EMS
Obese adult horse (although a minority may be normal sized) Abnormal body fat distribution, eg thickened, cresty neck; excess fat around head of tail; fatty shoulders; flabby, fatty sheath; pot-bellied look "Good doer" who puts on weight easily and loses it with great difficulty - Unexplained laminitis that may be obvious and severe or very subtle, eg hoof growth; laminitic rings on hoof wall and expan-sion of white line with no apparent lameness There is no one test for EMS. Raised blood glucose is strongly suggestive, especially if the animal isunder the age of 15 and showing some of the signs listed. Occasionally, ultrasonography can behelpful in assessing levels of omental fat. Often, a diagnosis of EMS is made only after elimination ofsimilar conditions such as Cushing's and hyperthyroidism (overproduction of thyroid hormones) fromblood tests, for example, glucose tolerance and dexamethasone suppression tests.
Various forms of treatment have been tried, based upon products that influence the pituitary and/oradrenal glands. But there is little rationale behind this because in EMS the pituitary and adrenalglands function normally. The results of trials have been inconclusive so far.
Similarly, the reasoning behind the practice of thyroid supplementation for EMS, which is popular inthe USA, is weak because these animals are not hypothyroid. It may be that it helps simply becauseit encourages weight loss.
By far the most important aspect of controlling EMS is a combination of diet and exercise. A diet highin fibre and based on hay, non-molassed sugar beet and commercial products such as HiFi Lite is"good". Sadly, grass, cereals and succulents such as apples and carrots are "bad". Supplementscontaining antioxidants, chromium and magnesium claim to be of help (possibly by increasing insulinsensitivity), but more work needs to be done here.
Exercise is essential — not only does it encourage a loss in omental fat, but it also promotes an in-crease in glucose uptake. Work has shown that a fit pony (even if slightly overweight) will have anincreased sensitivity to insulin and will lose weight faster than an unfit animal.

Inspired Journeys http://www.old.inspiredjourneys.co.za About our Workshops 2008-02-22 06:39:17 by admin About Hallucinogenic Plants For the Explorers of Inner Space Introduction There are a variety of tools available to anyone interested in exploring altered states of consciousness. Such toolsinclude meditation, out-of-body experiences, brain and biofeedback instruments, occult

Some biological parameters of the Faroe Plateau Cod by: Jón Kristjánsson Reykjavík Iceland Introduction Catch statistics for cod in the Faroe area is available since 1904. The catch figures are characterised by oscillations which are exceptionally regular (fig.1). This is interesting and some attempts have been done to explain this. There are mainly two separate cod stocks inside the