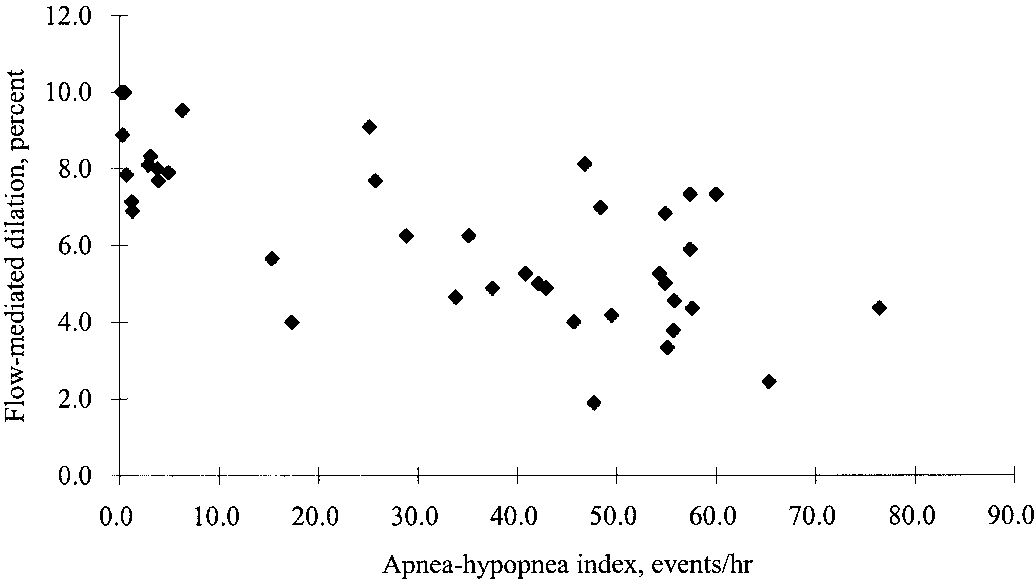 AMERICAN JOURNAL OF RESPIRATORY AND CRITICAL CARE MEDICINE TABLE 2. POLYSOMNOGRAM DATA OF OBSTRUCTIVE SLEEP APNEA SUBJECTS
Time with oxygen saturation of less than 90%, min For definition of abbreviations see Table 1.
* p р 0.001 for comparison between baseline and 4-week within the nasal continuous positive airway pressure group. No significant differences were found within the control group.
† p р 0.001 for comparison between nasal continuous positive airway pressure and control groups at 4 weeks. No significant differences were found between the two groups at baseline.
The obstructive sleep apnea–control group data excludes one patient who withdrew from study.
function was not sustained after stopping nCPAP treatment for endothelial function in OSA have shown conflicting data.
1 week, despite previous use for several months.
Blunted vasodilation in response to infusion of acetylcholine, a OSA syndrome is a global problem that occurs in 1–5% of vasodilator that stimulates endothelial release of nitric oxide, adult men and 1–2% of adult women of various ethnic popula- was demonstrated in forearm resistance vessels using occlusion tions (24). OSA has many adverse physiologic consequences that plethysmography (15, 16), but not confirmed in a more recent potentially constitute risks for development of cardiovascular study (32). Impaired relaxation response to bradykinin in the diseases. One of the postulated mechanisms is that it can precipi- forearm venous vasculature has been reported, suggesting endo- tate or accelerate atherosclerosis, although to date there is no thelial dysfunction in the venous vasculature (18). Using ultra- sound Doppler method similar to ours, impairment of FMD in The vascular endothelium participates in control of various the brachial artery was reported to correlate with minimum vascular functions through regulation of vasoactive mediators oxygen saturation in subjects with OSA (17). In contrast to in response to physical or biochemical stimuli in the body. Endo- our findings, another study found no significant difference in thelial injury, at cellular level or tissue level, is an important conduit–vessel dilation between sleep apnea and control subjects initial event in atherogenesis, preceding thickening of intima (16). In that study, subjects underwent conduit–vessel studies at and formation of atherosclerotic plaques (11, 12). Endothelial least 1 hour after resistance–vessel studies, which involved intra-arterial infusion of acetylcholine, nitroprusside and verapamil, dysfunction has been detected in disease states characterized by and residual effect of drugs on the vasculature, which affected atherosclerosis (11, 12) and also in conditions that predispose their response to reactive hyperemia, cannot be completely to atherosclerosis such as hypercholesterolemia and cigarette excluded. Recently, impaired hyperemic blood flow response mea- smoking, indicating that it is a marker of early atherogenesis sured by forearm plethysmography, an indicator of altered myo- (23, 25, 26). Endothelial dysfunction was shown to have a pre- genic and/or endothelial activity, was reported, and seven subjects dictive value for cardiovascular events in patients with chest pain showed improvement with use of nCPAP for 2 weeks (33).
and/or coronary artery disease (13, 14).
These studies have used different methods for evaluation Various circulating markers of endothelial dysfunction (27), of vascular endothelial function. The mechanisms of vascular including nitric oxide, soluble cell adhesion molecules, fibrino- response to vessel occlusion followed by reactive hyperemia are gen, and plasminogen activator inhibitor, have been reported to clearly complex, involving myogenic, neurogenic, and vasculo- be altered in OSA (1, 10, 28–31). Previous studies on vascular genic components, mediated by a variety of metabolic alterationsand vasoactive factors (34–36). The exact mechanisms appar-ently differ with vascular beds and evoking stimuli (35, 36). Usingsimilar techniques, hyperemic FMD in the brachial artery orother conduit vessels has been demonstrated to reflect endothe-lial function, mainly mediated by endothelial nitric oxide (37–39). The test has been shown to be accurate and reproducible (40).
It is regarded as a useful surrogate in assessing predisposition TABLE 3. STEPWISE MULTIPLE LINEAR REGRESSION MODEL
OF BASELINE FLOW-MEDIATED DILATION*
Figure 1. Correlation between baseline flow-mediated dilation of bra-
The excluded parameters include body mass index, diastolic blood pressure, chial artery and apnea–hypopnea index in obstructive sleep apnea (OSA) total cholesterol, and smoking history.
and subjects without OSA (n ϭ 40, r ϭ Ϫ0.655, p Ͻ 0.001).

Ip, Tse, Lam, et al.: Endothelial Dysfunction in Sleep Apnea ences in the response to endothelium-independent smooth mus-cle vasodilators might emerge.
“Uncomplicated” central obesity has been reported to be associated with impaired endothelial function (43), but the OSAstatus of those subjects has not been defined. We postulate thatthe endothelial dysfunction attributed to obesity was at leastpartly related to the presence of OSA in some of these subjects.
In this study, OSA and subjects without OSA were matched forobesity, and the body mass index was not a significant indepen-dent determinant of FMD on multiple regression analysis. Thechange in FMD with treatment of OSA without any concomitantchange in body weight and the use of a control group who didnot receive nCPAP treatment provided further evidence thatthe improvement in endothelial function in this study sample,most of whom were obese, was attributed to the use of nCPAP,whereas a placebo effect could not be definitively excluded.
Hypertension is associated with endothelial dysfunction (25).
Our subjects were normotensive, although there was a trendfor higher diastolic blood pressure in subjects with OSA and asignificant decrease in those treated with nCPAP, findings thatwere consistent with previous studies of OSA (44). There arefew data regarding the effect of blood pressure within the normo-tensive range on endothelial function. Hence, the role playedby the differences in blood pressure, if any, in the changes inendothelial function seen in these subjects is not known.
Figure 2. (A) Flow-mediated dilation of brachial artery in 14 subjects
Sleep debt per se has been reported to result in increased with OSA at baseline and after 4 weeks of nasal continuous positive sympathetic nervous system activity and decreased glucose airway pressure (nCPAP), showing significant increase in flow-mediated tolerance (45), which theoretically may lead to alterations in dilation (p ϭ 0.001). (B) Flow-mediated dilation of brachial artery in endothelial function. The lack of correlation between endothelial 13 subjects with OSA at baseline and after 4 weeks of observation, function and sleepiness score, an indicator of sleep debt, appar- showing no change in flow-mediated dilation (p ϭ 0.12).
ently did not support this speculation. However, our study wasnot designed to investigate this issue, and the relationship be-tween sleep debt and endothelial function remains to beexplored.
to coronary atherosclerosis because it has been shown to corre- Endothelial nitric oxide plays a central role in endothelial func- late closely with endothelium-dependent vasomotor response of tion (46) and endothelium-dependent flow mediated vasodilation of the brachial artery (36–38). Many pathogenetic mechanisms We have not been able to demonstrate any significant change that may impair endothelium-dependent nitric oxide–mediated in response to NTG, which produces brachial artery dilation vasodilation have been shown to be present in OSA. During mediated by vascular smooth muscle, independent of the endo- recurrent apneas and hypopneas, the vascular endothelium is thelium (38). In studies of subjects with OSA, results of vascular conceivably subjected to recurrent shear stress and hypoxemia– smooth muscle function have been variable. Again, studies have reoxygenation, which may result in decreased synthesis or en- used different evaluation techniques. Two studies that used ultra- hanced degradation of endothelial nitric oxide (10, 46), and sound Doppler to evaluate the brachial artery did not show any recent studies have demonstrated that circulating nitric oxide impairment of NTG-induced vasodilation in subjects with OSA levels were decreased in subjects with OSA (10, 19). Other (16) nor correlation with any measure of sleep apnea (17) . In mechanisms for impaired nitric oxide–mediated endothelial studies using other methods, conflicting data have been reported.
function, including increased oxidant load, enhanced oxidation One study showed heightened vasoconstrictor sensitivity in OSA of low density lipoprotein, insulin resistance, and increased sym- (32), whereas others did not demonstrate significant differences pathetic activity (46, 47), have been demonstrated to be present (15, 16, 18). However, the numbers of subjects in individual studies, including ours, have been small, and it is possible that Because recurrent hypoxia–reoxygenation is believed to be with substantially larger numbers of subjects, significant differ- a key process that triggers endothelial dysfunction in OSA, it is TABLE 4. VASCULAR REACTIVITY OF BRACHIAL ARTERY IN OBSTRUCTIVE SLEEP APNEA SUBJECTS
For definition of abbreviations see Table 1.
* p р 0.001 for within-group comparison between baseline and 4 weeks.
† p р 0.001 for between-group comparison of changes at 4 weeks.

Introduction This Code applies to United States circuit judges, district judges, Court of InternationalTrade judges, Court of Federal Claims judges, bankruptcy judges, and magistrate judges. Certain provisions of this Code apply to special masters and commissioners as indicated in the“Compliance” section. The Tax Court, Court of Appeals for Veterans Claims, and Court ofAppeals for the Arme