M A I N P R O D U C T S
P h a r m a c e u t i c a l s
>> Fiblast Spray (Wound healing agent)
• Consisting of Trafermin, a recombinant form of human bFGF, Fiblast Spray is a new type of drug for treating bed sores and skin ulcers.
• This strongly stimulates the growth of endothelial cells and fibroblasts, and accelerates wound healing by producing highly • Fiblast Spray was the world’s first human recombinant bFGF product developed by Kaken, which commenced sales in June 2001.
>> Artz (Anti-osteoarthritic)
• Artz is made of ultra-pure sodium hyaluronic acid extracted from rooster combs. Hyaluronic acid is a naturally occurring, biocompatible polymer found throughout the body, particularly in • Artz is a viscoelastic supplement for replacing the diseased synovial fluid found in osteoarthritic knees and restoring the physical proper- ties and elastoviscosity of such diseased synovial fluid.
• It is injected directly into the knee joint by a physician.
>> Procylin (Peripheral vasodilatation & Anti-platelet)
• Procylin is an orally active and chemically stable prostacyclin analog that directly acts on the PGI2 receptor to inhibit platelet aggregation.
• It is in wide clinical use for treating chronic artery occlusive disease. In September 1999, this product was approved for the additional indication of pulmonary hyperten- sion, which cannot be treated with any remedies currently in use. 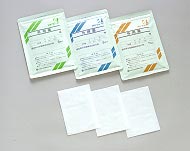 >> Adofeed (Pain-relieving plaster)
• Consisting of Flurbiprofen, Adofeed is a pain-relieving plaster, which is absorbed • It has proven effective in treating osteoarthritis, tennis elbow, muscle pain and other • It is applied to the affected area twice a day.
>> Mentax (Topical antifungal)
• Consisting of Butenafine, Mentax is a topical antifungal agent for treating athlete’s • It is Kaken’s original product that is sold around the world, including in the United States through Bertek/Mylan and in Canada through Schering-Plough.
>> Lipantil (Anti-hyperlipidemia)
• Consisting of Fenofibrate, Lipantil is a fibrate lipid lowering agent that lowers both triglycerides and cholesterol.
• Originally developed by Fournier in France, Lipantil was sublicensed to Kaken in 1996 by Fournier’s Japanese licensee, Grelan Pharm.
Kaken launched Lipantil into the Japanese market in May 1999.
>> Ebrantil ( 1-blocker)
• Consisting of Urapidil, Ebrantil is a specific 1-adrenergic receptor antagonist for neurogenic dysuria. Twice-daily administration of Ebrantil capsules significantly improves dysuria caused by central or peripheral neural disorders without causing significant hypotension. It was approved for this indication in November 1999.
• Ebrantil has already been in use for treatment of hypertension and dysuria due to BPH.
>> Cytotec (Antiulcer)
• Consisting of Misoprostol (PGE1 analog), Cytotec is effective for NSAID-induced • It was developed by G.D. Searle (now Pharmacia Corporation), and has been marketed

>> Norinyl T28 (Low-dose oral contraceptive)
• Norinyl T28 is a Sunday-start-type, low-dose oral contraceptive pill containing a combination of two hormones: norethisterone and ethinylestradiol. Incidence of metrorrhagia, which is often observed by users of this type product, is low.
• It was developed by Monsanto and Daiichi Pharmaceutical and received approval in June 1999. In September 1999, it was launched by Kaken into the Japanese market.
Kaken is currently marketing Norinyl T28 in collaboration with Morinaga Milk.
>> Eyecare 0.1 (Eye drop for corneal disorders)
• Hyaluronic acid, a naturally occurring, biocompatible polymer, was first discovered in the eye and has proved to promote to healing cornea epithelium wounds. (It is also a major component of Kaken’s Artz for the treatment of osteoarthritis.) • Eyecare 0.1 eye drop solution, containing ultrapure hyaluronic acid (0.1%), was approved in March 2000, for the treatment of corneal disorders, including dry eyes. It was launched into the Japanese market in July 2000 and co-marketed with Teika Pharmaceutical under the same brand name.
>> Mirol (Anti-glaucoma)
• Consisting of Levobunolol (0.5%), Mirol is a -blocker for treating • Mirol is used once daily as eye drops without heavy viscosity.
• It was launched in February 2001.
>> Seprafilm (Post-operative anti-adhesive)
• Seprafilm is a sheet-type, bioabsorbable, anti-adhesive, biomaterial consisting of hyaluronic acid and CMC.
• This unique product, licensed from Genzyme Corp., was initially in use in the gynecological field in Japan. In June 1999, it received additional approval for preventing post-operative abdominal adhe-

Ag ro c h e m i c a l s
>> Polyoxin (Fungicide)
• Polyoxin is a fungicide produced by a certain type of bacterium isolated from the soil • It is particularly effective for treating damage caused by alternalia in apple, pear and other fruit trees, as well as flowering trees and tobacco plants. It is also effective against botrytis rot and powdery mildew.
• With low toxicity, it does not damage crops and is highly safe for use.
>> Pentoxazon (Herbicide)
• Pentoxazon is a new type of paddy herbicide. It is effective against first-year weeds and • It is highly safe for use in rice paddies and can be used before, during or after A n i m a l H e a l t h P ro d u c t s
>> Salinomycin (Anti-coccidiosis in fowls)
• Salinomycin was developed originally by Kaken. In addition to sales in Japan, it is being exported to Europe, North America, Asia and elsewhere. It is the most widely used agent in the world to prevent and treat coccidiosis.
• Coccidiosis is a contagious disease that begins when protozoans become parasitic in the intestinal tracts of fowls. When transmitted, it causes stunted growth and even death.
The disease can be known to cause major economic damage in modern, large-scale >> Colistin (Anti-biotic agent)
• Colistin is used to prevent diseases caused by Gram-negative bacteria, such as colon • It is highly safe and is one of the few drugs used against Gram-negative bacteria. It has found widespread use. In addition to sales in Japan, it is being exported to European