THE STATE OF THE MUNICIPALITY ADDRESS (SOMA) OF HER WORSHIP THE MAYOR OF THE
FETAKGOMO LOCAL MUNICIPALITY CLLR. RAESETSE ELIZABETH SEFALA, DELIVERED ON THE
31ST MARCH 2011, MUNICIPAL COUNCIL CHAMBER, 15H30

Madam Speaker;
Members of the Executive Committee and Councilors;
Traditional leaders;
Business Leaders;
Political Parties;
Representatives and leaders of Civil Society, Youth, Women and People with Disability
The Senior Officials;
Members of the broader public
We are meeting here today hardly nine days after the celebrations of the national Human Rights
Day. The 21st March is celebrated as a human rights day and should not be taken for granted. Almost everyone remembers the massacre of our people on the 21st March 1960 who marched
peacefully to local police stations throughout the country to free African men from carrying According to Chief Albert Luthuli, “The liberation struggle was on in earnest”. People were in
cheerful, non-violent revolutionary mood when they were shot dead, mostly shot at the back. Bodies lied dead on the road and pavements. The total toll was 69 recorded dead and 180 had
bullet wounds. The Apartheid Government perpetrated such a brutal pain and humiliation on a
voteless and defenseless people.
Events in Sharpeville Massacre or the Year 1960 could be described as a year of destiny for
many and at the sametime an indicator of strong liberation struggle.
News of Sharpeville Massacre and other murderous killings perpetuated by the Apartheid was received with horror in SA and abroad. The words of the founding President of a democratic and
free South Africa, His Excellency, Nelson Mandela calculated that:
“By the middle of June 1960, figures of killings had risen to well over 300 killed and 500
wounded people”.
For many years our people including in our Sekhukhune area have been sacrificed and subjected to vicious attacks by the Apartheid regime. Mandela, for example, remembers that:
“In 1957, there were considerable mass unrests and disturbances in the country, Districts of
Zeerust, Sekhukhuneland and Rustenburg… in all these areas, there were revolts against the
pass laws…”.
The Nationalist Party Government used its legal powers to launch a full-scale attack on our people. Unlike theirs, ours is to launch full-scale commitment to Build Better Communities.
SEKHUKHUNE UPRINGS: 1958
The wars of resistance across the length and breadth of our country as well towed Sekhukhune. However, as a people we fought to ensure the protection of our land in order to attain the wealth of our region and indigenous place of birth. The people rallied around moral, social, political and economic values. In fighting the illegitimate, inhuman and discriminatory system of apartheid, there was a collaboration between Fetakgomo and Mathuduthamaga as spears for necessities against the white domination. Fetakgomo originates from the Feta kgomo ke moriri wa hloga: It’s for this cause and reason that today our municipality named after the glorious This State of the Municipality Address provides an opportunity to share thoughts and progress in regard of overall municipal governance. In general terms, we have worked harder to achieve numerous targets as set in our six critical GENERAL OVERVIEW OF THE ACHIEVEMNETS OF THE ANC-LED FETAKGOMO MUNICIPALITY
From both corporate and financial governance viewpoints, independent, objective professional opinion indicates that we are doing exceptionally well. For example, a trend analysis of the Auditor-General’s opinion over the years reveals that our performance graph is on the rise. Unqualified with emphasis Unqualified with emphasis Clean opinion of matter A comparative study in other municipalities shows that Fetakgomo is the only Municipality in the Limpopo Province and one of the four Municipalities in the Country, RSA that got a clean
audit opinion.
A recent Community Satisfaction Survey released on January 2011, administered by the Department of Local Government and Housing found that the Fetakgomo Municipality is doing electricity provision; public participation; and caring for orphans. The Survey warns the Municipality to: stop delays in the delivery of services; and extend services to all other wards than focusing on the neighbouring wards. The following key improvement recommendations are suggested by those who were surveyed: work together; work hard; give tenders to capable people; and improve sanitary conditions at the Bopedi Complex. As the Municipality we accept these recommendations as the basis for the customer care strategy. The overall findings of the survey help us to assess the extent of the customer 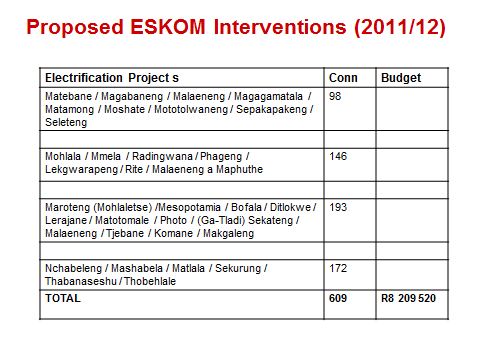 satisfaction with service delivery and to identify the areas where the community required A Synopsis on Basic Services Delivery and Infrastructural Development
There is strong, conclusive empirical evidence indicating that we have eradicated grid electricity backlogs in Fetakgomo with Shubushubung as the final village currently being electrified. We
will therefore meet the 2012 electricity target. Today, +/- 80% (22 727 out of 28 409) of the
households have been electrified.
Moreover, the following villages will benefit from post-connection electrification in the 2011/12 Closely tied to this, is that the Fetakgomo Municipality is currently providing indigent support to about 2 500 households who are beneficiaries of Free Basic Electricity.
All schools and clinics have been electrified. We will engage ESKOM to ensure that one block at Nyaku Secondary School switches on and that the Tlakale Primary School converts from a conventional to a prepaid electricity system as per school’s request. We are awaiting the three additional transformers so as to strengthen the capacity of the
existing ones in order to make the Street Lights fully functional. The project (street light)
entailed installation of 9.5km street lights and was constructed at the cost of about R2 million.
Further to this, the 15 High Mast Lights that have been erected at Pelangwe, Seokodibeng,
Mohlaletse Community Halls, Fetakgomo Atok Thusong Service Centre, Ga-Oria/Radimmela T- Junction, Apel/Mapodi, Phashamakgalanoto, Mosotse, Ga-Selepe, Mmakopa, Mphanama, Ga- Matlala (x2) and Mohlaletse (x2) are expected to switch-on soon, in not later than two months.
A Synopsis on Health
We are engaging the Department of Health at national level and other role players with a view of securing the conversion of Nchabeleng Health Centre into a Hospital. This will reduce
distance and traveling costs by our people to Lebowakgomo (68 km from Ga-Nchabeleng Health
Centre), Mecklenburg (59 km) and Jane Furse (73 km). The Jane Furse Hospital is speculated to
be populated by people mostly from Fetakgomo. Generally, about 05 fixed clinics are needed for Ward 09 (Malogeng), Ward 13 (Mooilyk), Ward
11 (Ledingwe and Seokodibeng) and Ward 07 (Ga-Matlala/Mashabela to address the existing
It is recognized that access to health facilities is one of the critical population priorities.
A Synopsis on Housing
Whereas there is a recorded material progress of 3184 RDP houses having been built in
Fetakgomo since 2001, our task is unfinished because this progress co-exists with incomplete and poorly constructed RDP houses. We urge all those who are affected in this regard to report these anomalies to their respective ward councillors. Only two wards, 06 and 07 will benefit from the RDP housing allocations in the 2011/12 financial
year with 50 and 125 allocations respectively. 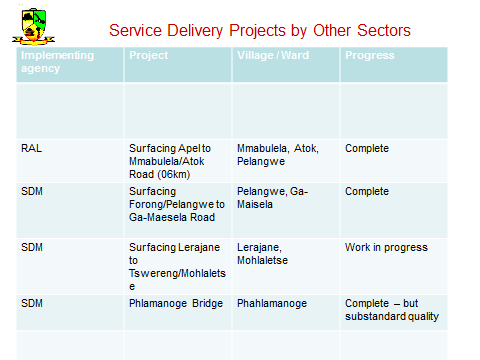 from 1995 The Demon-Haunted World: Carl Sagan’s “Baloney Detection Kit” What’s in the kit? Tools for skeptical thinking. What skeptical thinking boils down to is the means to construct and to understand, a reasoned argument and—especially important—to recognize a fallacious or fraudulent argument. The question is not whether we like the conclusion that emerges out of a train of