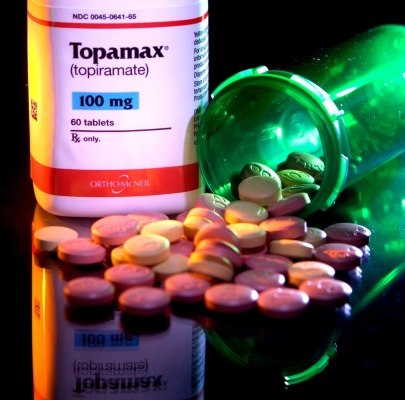 Study eyes epileptics' use of generic drugs
January 3, 2010 By RIDGELY OCHS [email protected]
Photo credit: Bloomberg News File | Topamax migraine medicine A blow to her head 20 years ago during a mugging left Thia Moore of Huntington with epilepsy. Until the state began picking up her drug costs, she had been paying $1,200 a month out of pocket for brand-name drugs that kept her seizure-free. But when the 47-year-old theater student switched to a cheaper generic version of the anticonvulsant drug Keppra this spring to save money, she had a seizure within days. "This is a major problem for some individuals," said Moore's neurologist, Dr. Alan Ettinger of Neurological Surgery of Long Island in Lake Success. "They may have to adhere to being prescribed the brands." The Epilepsy Foundation and the American Academy of Neurology agree with Ettinger. They say that epilepsy, a seizure disorder that afflicts about 3 million nationwide, can be especially challenging to treat. Even a minor change in a brand-name epilepsy drug - to create a generic alternative - can lead to breakthrough seizures. These can be medically dangerous and even life-changing: In New York, as in many other states, epileptics are supposed to surrender their driver's licenses until they've been seizure-free for a year. FDA backs generics
But the U.S. Food and Drug Administration and generic drugmakers have long disputed their contentions, saying there's no difference between brand-name and generic drugs, including those for epilepsy. At issue is the sometimes substantial savings from using cheaper generic drugs - a goal of the Obama administration and routinely required in New York unless the doctor specifies otherwise. Drugstore.com lists 60 100 mg. tablets of Topamax, an epilepsy drug, at $451.60; its generic equivalent is listed at $49.99. Kathleen Jaeger, president of the Generic Pharmaceutical Association, said Americans saved $121 billion using generics last year. Generic drugs, which now make up about 68 percent of drugs dispensed nationwide, are not put through clinical trials like the original drug. Instead they are tested in 24 to 40 healthy people - not in people with the condition the drugs are designed to treat. What the FDA looks for is "bioequivalence," that is, whether the generic is absorbed into the blood stream at the same level as the original. Generics used for other conditions have also raised questions. In 2006, patients logged complaints when they were switched to a generic version of the extended-release antidepressant Wellbutrin XL, saying their depression had returned or they had suicidal thoughts. And heart disease experts have expressed concerns about switching to some generics to treat cardiovascular disease. But it is epilepsy medications that have incited the greatest controversy. Studies eye drug changes
Two small studies published this year found epileptics who had been switched to another version of the same medication - from brand name to generic, from generic to generic, or from generic to brand name - were 80 percent more likely to have had a seizure than those who stayed on the same version. Responding to criticism, the FDA has said it is now working with the National Institutes of Health to design a study to test whether generic and brand name epilepsy drugs are bioequivalent - a move praised by the Epilepsy Foundation. "I think this is a very important study," said the foundation's president, Eric Hargis. Ettinger agreed, but said he was worried that the study "will probably take years to run and to assess its results." "My concern is that in the meantime some patients may experience all sort of complications," he said. In New York, a pharmacist must dispense a generic version of a drug unless the doctor writes "DAW" - dispense as written - on the prescription. Patients must be informed whether they are getting a generic or brand-name drug. But doctors said patients can be pressured by health insurers to switch to generics to save money. "It's like a pandemic. They're trying to push everyone into generics," said Dr. Edward Firouztale of South Shore Neurologic Associates in Patchogue. Hargis said an even bigger problem for some epileptics is being switched from one generic drug to another without being told - legal in New York. Subtle differences between brand and generic drugs for other conditions might not hurt the patient, doctors said, but that's not the case for epilepsy. "If someone has a seizure, it can kill people," Firouztale said. "God forbid if they have a seizure when they are driving."

IT’S HAPPENING Sept. 20, 2000 NDSU researchers receive $1.9 million NSF grantA group of NDSU researchers was among the recipients of grantsannounced by the National Science Foundation (NSF) under its new$90 million Information Technology Research (ITR) initiative. BrianSlator, associate professor of computer science, is the principalinvestigator for the “Systems for Learning Science