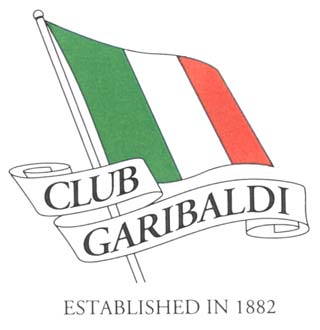 Club Garibaldi News
AUGUST 2008
THE PRESIDENT’S REPORT
As winter is well and truly upon us, I hope you are all well and keeping in good health. Keep smiling ~ spring is not very far away! After nearly four years as First Secretary/Deputy Head of Mission, Massimo Carnelos of the Embassy of Italy will shortly leave New Zealand to take up his new posting in Nicosia. In the President's speech at Massimo's farewell cocktail party, Ginette publicly acknowledged and thanked Massimo for his support and for being a true and loyal friend of Club Garibaldi. During his time in New Zealand Massimo attended many club functions and events as the Embassy's representative: he was always very amiable, warm and interested in whatever we were doing. He will be missed. On behalf of the club members Ginette presented him with a small gift, adding that perhaps whenever he looked at it he would think of us with affection! Club Garibaldi wishes Massimo, his lovely wife Viola and their two beautiful daughters, Lavinia and Allegra, who by the way, were both born in New Zealand, God speed and very best wishes for the future. We also bid farewell to Monsignor Francesco Cao Minh Dung of The Apostolic Nuncio, Wellington, who
has been transferred to Rome. Club Garibaldi wish Monsignor Francesco all the very best for the future,
and pray for him as he continues the Lord's work. Monsignor's replacement will be introduced to
members in the next newsletter.
This year’s Annual General Meeting will be held at the clubrooms on 31 August 2008, at 7.00 pm.
A friendly reminder that the annual membership subscriptions are due now. Thank you to all the
members who have made their payments and updated their records.
Due to computer problems, this month's shortened newsletter will not have an Italian translation.
Ginette Toscano Page

Amendment to Constitution under ‘Life Member’ Clause 1.
I propose that the honour of Life Member be left at the discretion of the President and the Executives of
Club Garibaldi. Their decision of such an appointment shall be final and binding with no need for
general membership approval.
Proposed by: Salvi Gaeta
Seconded by: Jo Gaeta

Matthew Bale, son of Marilyn (nee Paino) and David Bale of Wellington, to Kerry Young of Lower Hutt.
The wedding took place on Saturday, 19 July 2008, at the Erskine Chapel, Island Bay Wellington.
Congratulations Matthew and Kerry, Club Garibaldi wishes you a lifetime of love and happiness.

THE LATE (PIETRO) PETER DAL DIN – CLUB MEMBER
The Dominion Post, Thursday, 26 June 2008 Reproduced with kind permission of the Dominion PostPeter Dal Din, market gardener: Born Italy, July 7, 1924; married 1952 to Cesira Benotto, 1 son 1 daughter; died Otaki, June 11, 2008, aged 83.
The Kiwi welcome mat thrown to an Italian immigrant in 1952 was so crude and scary, a lesser man would have fled. Instead, he and his wife knuckled down and stayed. The respect he doubtless merited on his arrival was noted in kind recently when a street in Otaki was named in his honour. Peter Dal Din, who came from a long line of market gardeners in San Pietro di Barbozza, north of Venice, grew vegetables in New Zealand for more than 50 years. After marrying Cesira Benotto in June 1952 and travelling to New Zealand on their honeymoon two months later by flying boat, they got a rude awakening to an arranged job on the Kapiti Coast. The father and son who employed them as farm workers expected them to sew their own mattress out of fertiliser sacks, stuff them with hay and sleep in a house with an earthen floor! They worked seven days a week, rising at 5am. They got stale bread from a bakery to feed the plough horses, but it was better than the food they could afford. They were paid 6 pounds a week and most of that went on living expenses. Mr Dal Din was very unhappy and wanted to go back to Italy, but they stuck it out for 18 months till they had paid back their airfare. A rental house with some land in Taita enabled Mr Dal Din to grow tomatoes in his spare time while working in a timber yard. After six years of hard saving, they bought 1.2 hectares in Otaki and moved with their one-year-old son, Franco. Their daughter, Anna, was born in Otaki four years later. Mr Dal Din specialised in hothouse tomatoes to gain an early and late-season advantage over other growers. One variety grown was Italian plum tomatoes which Mr Dal Din couldn't even give away 30 years ago because they were too unusual. Over the years, tastes changed and the non-acidic tomatoes became sought after. He also grew a wide variety of vegetables, figs, nuts, grapes and pip-fruit. Passionate about food and wine, Mr Dal Din cured his own salami, made wine, grappa, liqueur, bread, cheese, pasta, preserves and roasted his own coffee. Over the past two years, Mr Dal Din joined with a neighbour to subdivide 2.4ha of their land, making 23 new sections. The new road created was unveiled at a ceremony as Dal Din Drive less than three weeks before Mr Dal Din died. Mr Dal Din returned to Italy about 20 times for extended periods, including taking his children to immerse them in the language.

UPCOMING EVENTS
The next night for Tombola will be
Tuesday, 26 August, at the usual time
of 7.30 pm. Please come along and feel
ITALIAN MASS
CIRCOLO SEPTEMBER SOCIAL
Sunday 7 September 2008 at 11.30am at St Francis de Sales Church, Island Bay. FUNCTION
At 7.30pm on 4 September, Circolo member Shahla Motodel will give a presentation. SHARED LUNCH
she returned to Wellington in June 2008. the Societa` Dante Alighieri School in Rome for five and a half months in total. She also travelled throughout Italy and enjoyed an A $4.00 cover charge towards supper will l ase note that th s
ITALIAN FILMS
from the one advertised in last
month's Newsletter. The function to
honour Cav. Jack Ball and Cav. Tamara
Budec will now be held on 2 October.
shown. Big business corruption informs this DATES FOR YOUR DIARY

A BIT OF TRIVIA
By Ginette Toscano Page
ANSA - Imperia, June 20 2008
A lifeguard got into trouble on the Italian Riviera Friday after leaving a blow-up doll in his place
while he took a break. Coast guards who were checking safety standards along the coast, came
across the doll sitting in the lifeguard's deckchair with his vest on and his whistle sticking out of
her mouth! She had a pair of binoculars and a lifebuoy close to hand. The lifeguard was tracked
down and fined 1,000 euros. 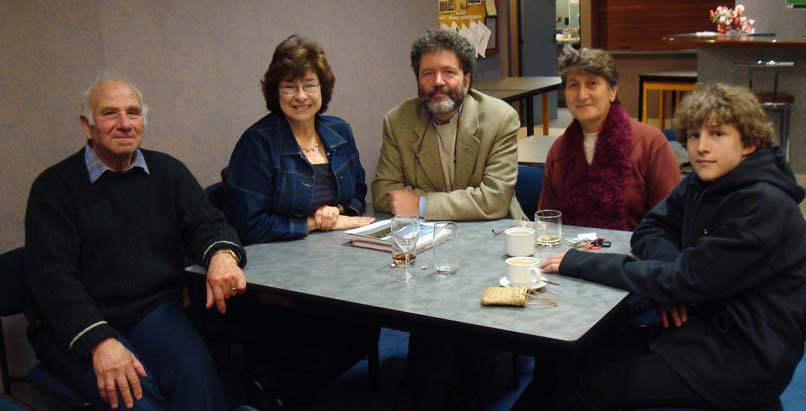 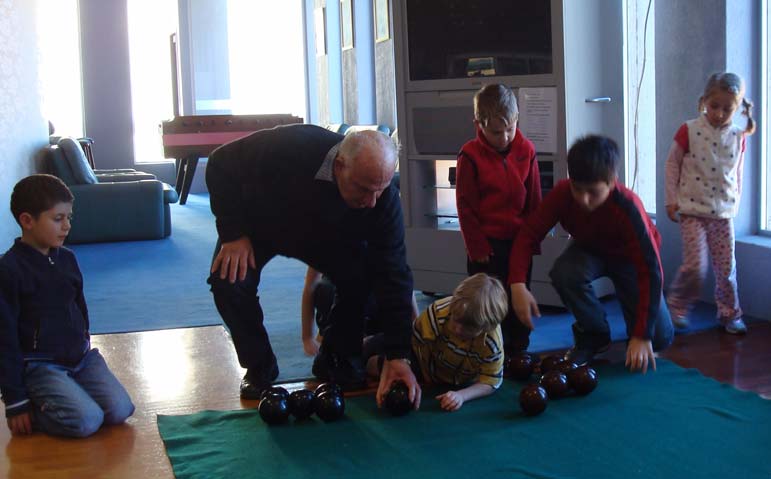 ITALIAN MAYOR VISITS
By Ginette Toscano Page
Although Sunday evening on 27 July was a typical winter’s day, it did not deter the warm welcome given to two Italian visitors to the club; the current Mayor of the Comune di Tavarnelle Val di Pesa, Stefano Fusi, a position which he has held for eight years, and his 14 year old son, Alex. During conversation over coffee and wine, we learned that Stefano and Alex’s trip to New Zealand (one of many) was two-fold, for business and to visit the family of Stefano’s wife. Stefano is married to a New Zealander, originally from Lower Hutt: they met through a chance meeting in Italy many years ago, when she visited an aunt who was married to an Italian! As they say, the rest is history! Alex, the oldest of three children, speaks English extremely well, albeit with a very slight ‘kiwi’ accent, which I enquired about. He proudly replied that his mother had taught him! The short time we shared together was most enjoyable, and I trust that Stefano and Alex will return to Tavarnelle Val di Pesa with good thoughts of Club Garibaldi. Footnote: Tavarnelle Val di Pesa is a comune (municipality) in the Province of Florence in the Italian region of Tuscany, about 25 km south of Florence, on the border with the province of Siena and the Chianti area. Vince Basile, Ginette Toscano Page, Stefano Fusi, Rosaria Massa & Alex Fusi
Vince Basile showing the children how to play bowls

Club members Joseph Zino of Island Bay and Marcus Trlin of Lower Hutt, were part of the
winning Hutt Valley Patteson Trophy indoor bowls team.
Marcus played two in one team, and Joseph skipped the other team, to gain the supremacy of
the lower North Island Region. They will now both go on to compete for the Welch Trophy
against other 5 region winners for the premier team trophy in indoor bowls, in Mt Roskill.
Auckland, on the 5th, 6th and 7th of September.
Joseph also won the Hutt Valley Champion of Champion singles. He will now travel to
Christchurch to represent the Hutt Valley against 34 other winners in the New Zealand
Champion of Champion singles on 13th September.
Club Garibaldi congratulate both Joseph and Marcus on their success, and wish them all the
very best for the up-coming competitions.
Joseph & Marcus

VINO COTTO (COOKED GRAPE MUST)
By Ginette Toscano Page
Vino Cotto (cooked wine) is an ancient and traditional dessert wine, originally from the Abruzzo
and Le Marche regions of Italy. The wine has a unique sweet/sour flavour, known as
‘agrodolce’, and is made from the must of grapes. Since the Roman times, vino cotto was used
as a method of preserving wine for long periods of time.
Once pressed, the grapes are boiled in a large copper and cooked over a high heat for up to 24 hours, until a third of the liquid has evaporated, in order to increase the percentage of sweetness. While still boiling, it is poured in small oak barrels which contain the sediment of vino cotto from the previous year – "madre" – essential to make perfect it’s unique sweet/sour flavour. After this process is finished, the mixture is then placed in large kegs and allowed to age for 6-12 months, after which time the vino cotto is ready to be drunk. Vino Cotto’s amber colour is the result of long maturing, and it’s soft taste is ideal to water down desserts, typical cakes of the Marches, such as ciambellotto, tozzetto or cicerchiata, and roasted chestnuts. As it has a high alcohol content, 14%, it is sometimes illegally distilled to make a rough spirit called ‘Mistra’.