Theory and practice of aerosol science

AEROSOLOMICS PROFILING: APPLICATION TO BIOGENIC AND ANTHROPOGENIC
J. RUIZ-JIMENEZ1, J. PARSHINTSEV1, K. HARTONEN1, M.–L. RIEKKOLA1 1Laboratory of Analytical Chemistry, Department of Chemistry, University of Helsinki, P.O.Box 55, FI- 2Division of Atmospheric Sciences, Department of Physical Sciences, University of Helsinki, P.O.Box 64, Keywords: AEROSOLOMICS PROFILING, BIOGENIC AEROSOL, ANTHROPOGENIC AEROSOL, Atmospheric aerosol particles consist of a complex mixture of inorganic and organic compounds. Depending on the site and the degree of pollution, organic compounds may represent up to 70% of the total dry fine particle mass in the lower troposphere, (Turpin B.J. et al. 2000; Saxena et al. 1996). Despite the significant abundance of organic compounds in aerosol particles, very little is known about their chemical composition. The number of organic compounds in aerosol particles can easily be several hundreds (Oros D.R. et al. 2001 a,b). These organic species are often present at trace levels (less than ng m-3), and vary significantly in polarity and volatility. In aerosolomics all the compounds present in aerosol particles are determined. Two complementary methodologies can be applied in aerosolomics. In aerosolomic fingerprinting all the detected analytes in aerosol particles are of interest, but there is no need to identify them all. In aerosolomics profiling only a small number of pre-selected analytes in aerosol particles are analysed by the methods carefully optimized for these target compounds. Collection of nanometer size particles for both their characterization and determination is a very challenging task. Typical particle collection devices and systems, such as impactors, electrostatic precipitators, filters, particle growth in supersaturated water vapor (Simon P. et al. 1995) and particle into liquid, the latter being acombination of particle growth in supersaturated water and impaction in a quartz plate, are active ones in the sense that a known quantity of air needs to be drawn through the systems. Unfortunately in many cases their collection efficiency for particles significantly smaller than 100 nm is poor (Saxena et al. 1996, Parshintsev et al. 2010, Orsini et al. 2003). All particle collection systems mentioned have one common limitation, namely they do not allow the particle size segregation. A differential mobility analyzer (DMA) coupled to a particle charger in whichcharged particles are size-separated in DMA is a new option. Once the particles are size-separated they can be analyzed directly by aerosol mass spectrometer (AMS), or collected on a suitable filter (Laitinen et al. 2010). The chemical analysis of aerosol particles is demanding and no single technique is available for the simultaneous analysis of all organic compounds in atmospheric aerosol particles. Aerosol mass spectrometry is a good technique in the analysis of atmospheric aerosols within a short time a without sample pretreatment (Laitinen et al. 2009).However, it does not, unfortunately, allow the separation and determination of the individual components in the aerosol particles. In the aerosolomics profiling chromatographic techniques are needed for the individual separation and determination of the target compounds. One of the most widely used chromatographic techniques for the analysis of volatile and semi-volatile compounds in aerosol particles is gas chromatography–mass spectrometry (GC–MS) due to straightforward on-line coupling of GC with MS and the large amount of library reference spectra 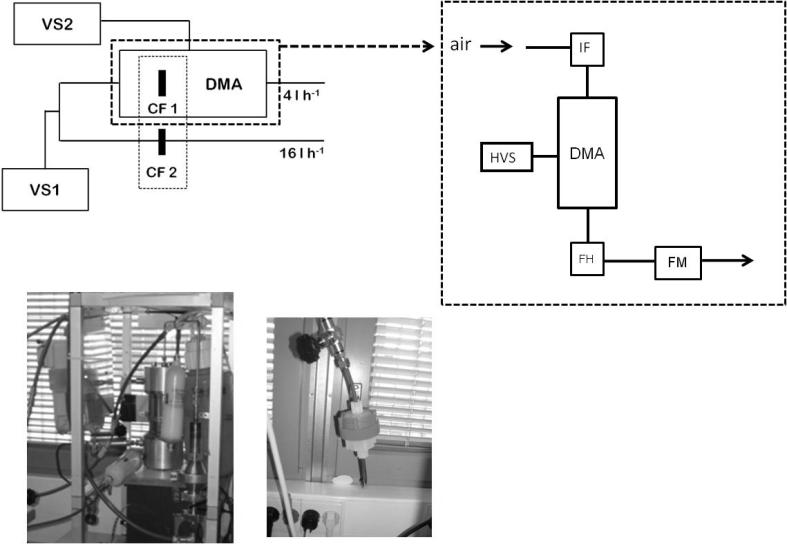 available.However, highly polar and non-volatile compounds cannot be analysed without chemical derivatization by GC. Then other techniques such as high-performance liquid chromatography (HPLC), ion chromatography (IC), or capillary electrophoresis (CE) with indirect UV (PDA) detection (Khwaja et al. 1995, Limbeck et al. 1999, Soga et al. 1997) are beneficial. In this work, aerosomics profiling was employed for the determination of potential marker compounds, one amine, four aldehydes, two polyols and thirteen acids in biogenic and anthropogenic aerosol samples. The results achieved were used for the development of model based on pattern recognition techniques that enable the differentiation between biogenic and anthropogenic aerosol samples and help to find real marker compounds for particle growing processes. Fifty nanometer and all size aerosol particles from two different sources, biogenic and anthropogenic, were studied in this research. Twelve biogenic samples, and twelve anthropogenic samples, a half containing all particle sizes and the other half containing 50 nm particles, were collected using the device described in Figure 1. Figure 1. Dual sampling device scheme. VS, vacuum system; CF, collection filter; DMA, differential mobility analyzer; IF, ionization font; HVS, high voltage supply; FH, filter holder; FM, flow-meter Biogenic aerosol samples were collected in spring of 2009 at the Station for Measuring Forest Ecosystem Atmosphere Relations (SMEAR II) at Hyytiälä (Finland), and anthropogenic aerosol samples were collected in summer of 2009 at the urban background station SMEAR III at Helsinki (Finland). The method employed for the determination of the target analytes can be divided into three steps: (1) extraction of the target analytes from the filters; (2) sample preparation including derivatization, dilution, pH changes, etc; and (3), individual isolation and quantitation of the target compounds. The extraction of the target analytes from the sampling filters and their subsequent silylation derivatization were accelerated by means of ultrasounds. 3-hydroxyglutaric, adipic, azelaic, pinoic, tartaric, vanillic, palmitic, maleic, malic, malonic, stearic, oleic and pinic acids, polyols, levoglucosan, α- D-mannose and β.-D-mannose were determined by GC-MS after derivatization. benzaldehydewere determined by LC-MS after extraction of the analytes from the filters without any additional sample preparation. Diethylamine was determined by LC-MS after a pH change of the sample using ammonium hydroxide. The methods developed for the determination of the target compounds were validated by means of the

The Link  A publication from the Alton Memorial Hospital Infection/Pharmacy Committee on Formulary and Drug Use Evaluation for physicians. August 2011 PCA changes in preparation for CPOE The BJC Community Hospitals have completed the physician order form for PCA (patient controlled analgesia) and have standardized to specific concentrations and ordering parameters.