A Review of the Evidence on Impairment of Antihistamines and Driving Ability
The driving risks due to alcohol use are well known and in 2002, there were 17,970 alcohol-related crashes in the United States. There has also been a growing awareness of the traffic safety risks due to the behavioral toxicity of drugs other than alcohol. These include not only illicit drugs, such as cocaine and marijuana, but also medicinal drugs that are available over- Widespread use of antihistamines (histamine H1-receptor antagonists, or H1-antagonists) present a particular concern since the first-generation antihistamines are well known for causing sedation and central nervous system (CNS) dysfunction that can jeopardize safe driving. Antihistamines also have additive effects with alcohol and other CNS depressants. These drugs are widely used and are available in both over-the-counter and prescription treatments for colds, allergies, and hay fever. Second-generation antihistamines have been produced in the last decade. These are associated with fewer side effects and have fewer reports of sedation. Currently, there are more than 60 oral antihistamines available. The National Highway Traffic Safety Administration sponsored a review of the evidence on impairment of antihistamines on driving ability by the Southern California Research Institute. The institute reviewed the scientific literature from several perspectives: epidemiological studies, laboratory tests of driving related skills, and simulator and on-the-road studies. The five most widely prescribed or studied drugs from each generation of antihistamines were included. There are six generally recognized chemical classes of antihistamines: alkylamines, ethanoloamines, piperazines, ethylenediamines, phenothiazines, and piperidines. Antihistamines Reviewed
First-generation H1-receptor antagonists
chlorpheniramine Chlor-Trimeton Alkylamines Second-generation H1-receptor antagonists 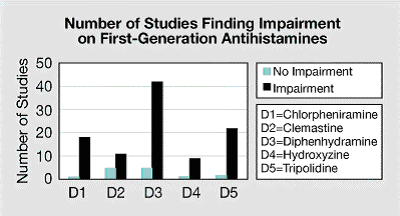 Performance measures were categorized into 10 behavioral categories and one subjective category for both acute and repeated dosing schedules. Findings
There is some slight, but ambiguous, evidence from epidemiological studies of a connection between antihistamine use and traffic crash rates. These epidemiological studies were done primarily when the use of first-generation (but no second-generation) antihistamines was prevalent. There is overwhelming evidence from the experimental literature that the first-generation antihistamines produce objective signs of skills performance impairment as well as subjective symptoms of sedation. 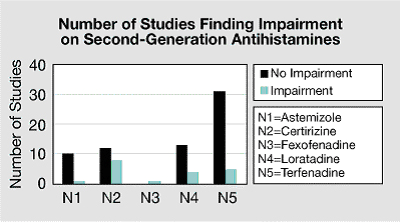 In contrast, second-generation antihistamines show much fewer incidence of objective skills performance impairment and, in the majority of cases, no evidence of subjective sedation. While second-generation antihistamines represent a major triumph for the pharmaceutical industry in reducing potential side effects, there still remains some evidence that all antihistamines have objective skills impairment consequences. Within both groupings of antihistamines, there is considerable variation in objective evidence of impairment. For the first-generation antihistamines, there is variation in subjective effects (such as sedation). Within each generation, there clearly are preferred drugs used to avoid The researchers note that the rate of impairment can be manipulated by studies that fail to use sensitive performance measures or to test at appropriate post-dose times. Some methods For drivers seeking treatment for the symptoms of colds, flu, and allergies, the proper selection of second-generation antihistamines should produce little impairment of skilled performance, such as driving. How To Order
For a copy of Antihistamine and Driving-Related Behavior: A Review of the Evidence
for Impairment for First- versus Second-Generation H1-Antagonists(32 pages plus
extensive appendices), write to the Office of Research and Technology, NHTSA, NTI-130, 400 Seventh Street, SW., Washington, DC 20590 or fax 202-366-7096, or download from www.nhtsa.dot.gov. Richard Compton, Ph.D., was the contract manager. TRAFFIC TECHis a publication to disseminate information about traffic safety programs,
including evaluations, innovative programs, and new publications. Feel free to copy it as you wish. If you would like to receive a copy, contact Patricia Ellison Potter, Ph.D., Editor, fax 202- 366-7096, e-mail: [email protected]