ו קדבנ ונכותו תואירבה דרשמ י ע MEDICINAL PRODUCT
Tradename
LYRINEL 5mg, 10mg®
International Non-Proprietary Name
QUALITATIVE AND QUANTITATIVE COMPOSITION
Each extended [prolonged] release tablet contains 5 mg or 10 mg of oxybutynin chloride 3. PHARMACEUTICAL
Extended [prolonged] release tablets for oral use: • 5 mg: Pale yellow, round, tablet with “5 XL” printed on one side with black ink. • 10 mg: Pink, round, tablet with “10 XL” printed on one side with black ink. 4. CLINICAL
PARTICULARS
4.1. Therapeutic
Indications
Once daily controlled-release tablet indicated for the treatment of overactive bladder with symptoms of urge urinary incontinence, urgency and frequency. 4.2. Posology and Method of Administration
LYRINEL is administered orally once daily.
The recommended starting dose of LYRINEL is 5 or 10 mg once daily. Dosage may be adjusted in 5-mg increments to achieve a balance of efficacy and tolerability (up to a maximum of 30 mg/day). In general, dosage adjustment may proceed at approximately weekly intervals. [Patients already taking immediate release oxybutynin may be switched to the nearest equivalent total daily dose of LYRINEL.] LYRINEL must be swallowed whole with the aid of liquids, and must not be chewed, divided, or crushed. LYRINEL may be administered with or without food (see Section 5.2, Pharmacokinetic Properties).
Elderly[≥65 years old]:
4.3. Contraindications
LYRINEL is contraindicated:
- Hypersensitivity to oxybutynin or any of the excipients - Narrow-angle glaucoma or shallow anterior chamber - Gastrointestinal obstructive disorder, paralytic ileus or intestinal atony - Urinary frequency and nocturia due to heart or renal failure 4.4. Special
Warnings
Special Precautions for Use
Oxybutynin is associated with anticholinergic central nervous system (CNS) effects (See Section 4.8 Undesirable Effects). Patients should be monitored for signs of anticholinergic CNS effects, particularly in the first few months after beginning treatment or increasing the dose. If a patient experiences anticholinergic CNS effects, dose reduction or drug discontinuation should be considered. Angioedema of the face, lips, tongue and/or larynx has been reported with oxybutynin. In some cases, angioedema occurred after the first dose. Angioedema associated with upper airway swelling has the potential to become life-threatening. If involvement of the tongue, hypopharynx, or larynx occurs, oxybutynin should be promptly discontinued and appropriate therapy and/or measures necessary to ensure a patent airway should be promptly provided. Heat prostration (fever and heat stroke due to decreased sweating) can occur when anticholinergics such as oxybutynin chloride are administered in the presence of high environmental temperature. Because anticholinergic agents such as oxybutynin may produce drowsiness (somnolence) or blurred vision, patients should be advised to exercise caution. LYRINEL should be given with caution in patients with the following conditions: • hepatic or renal impairment; • clinically significant bladder outflow obstruction because of the risk of urinary retention (see Section 4.3, Contraindications); • gastrointestinal obstructive and gastrointestinal motility disorders because of risk of gastric retention (see Section 4.3, Contraindications); • conditions such as ulcerative colitis due to the potential for decreased gastrointestinal • myasthenia gravis due to the risk of symptom aggravation; • gastroesophageal reflux and/or who are concurrently taking drugs (such as bisphosphonates) that can cause or exacerbate esophagitis; • preexisting severe gastrointestinal narrowing (pathologic or iatrogenic); • preexisting dementia treated with cholinesterase inhibitors due to the risk of TRADENAME must be swallowed whole with the aid of liquids, and must not be chewed, divided, or crushed. The medication is contained within a nonabsorbable shell designed to release the drug at a controlled rate. The tablet shell is eliminated from the body; patients should not be concerned if they occasionally notice something that looks like a tablet in their stool. Oxybutynin hydrochloride is not recommended for use in children below age 5 years due to insufficient data on safety and efficacy. There is limited evidence supporting the use of Oxybutynin in children with monosymptomatic nocturnal enuresis (not related to detrusor overactivity). In children over 5 years of age, Oxybutynin hydrochloride should be used with caution as they may be more sensitive to the effects of the product, particularly the CNS and psychiatric adverse reactions. 4.5. Interactions with Other Medicinal Products and Other Forms of
Interaction
The concomitant use of oxybutynin with other anticholinergic medicinal products or drugs with anticholinergic activity, such as amantadine and other anticholinergic antiparkinsonian drugs (e.g. biperiden, levodopa), antihistamines, antipsychotics (e.g. phenothiazines, butyrophenones, clozapine), quinidine, tricyclic antidepressants, atropine and related compounds like atropinic antispasmodics, dipyridamole, may increase the frequency or severity of dry mouth, constipation and drowsiness. Anticholinergic agents may potentially alter the absorption of some concomitantly administered drugs due to anticholinergic effects on gastrointestinal motility. They may also antagonize the gastrointestinal prokinetic effects of metoclopramide and domperidone. However, the interaction between prokinetics and oxybutynin has not been established. Sublingual nitrates may fail to dissolve under the tongue owing to dry mouth, resulting in reduced therapeutic effect. Oxybutynin is metabolised by cytochrome P450 isoenzyme CYP3A4. Mean oxybutynin chloride concentrations were approximately 2 fold higher when Lyrinel XL was administered with ketoconazole, a potent CYP3A4 inhibitor. Other inhibitors of cytochrome P450 3A4 enzyme system, such as antimycotic agents (e.g. itraconazole and fluconazole) or macrolide antibiotics (e.g. erythromycin), may alter oxybutynin pharmacokinetics. The clinical relevance of such potential interaction is not known. Caution should be used when such drugs are co-administered. 4.6. Pregnancy and Lactation
Reproduction studies with oxybutynin chloride in the mouse, rat, hamster, and rabbit showed
no evidence of impaired fertility or harm to the animal fetus. The safety of LYRINEL
administered to women who are or who may become pregnant has not been established.
Consequently, risks and potential benefits should be considered before this drug is administered
to pregnant patients.
It is not known whether oxybutynin is excreted in human milk. Caution should be exercised if LYRINEL is administered to a nursing woman.

4.7. Effects on Ability to Drive and Use Machines
No studies have been performed on the effect of LYRINEL on the ability to drive and use
machines. Because anticholinergic agents such as oxybutynin may produce drowsiness
(somnolence) or blurred vision, patients should be advised to exercise caution.
4.8. Undesirable
The table below reflects the data obtained with Lyrinel XL in clinical trials and from postmarketing experience. In clinical trials with Lyrinel XL (n=1006), adverse events were associated mainly with the anticholinergic actions of oxybutynin. Adverse events were generally dose related. As with other oxybutynin formulations, dry mouth was the most frequently reported adverse reaction. However, in clinical studies, dry mouth has been less frequently reported with Lyrinel XL than with oxybutynin immediate release formulations. For patients who required final doses of 5 or 10 mg of Lyrinel XL, the relative incidence of dry mouth that occurred at any dose level was 1.8 times lower compared with patients who required final doses > 10 mg. Uncommon
Not Known*
1/100 to <1/10
1/1,000 to
1/10,000 to
<1/100
<1/1000
Infections
infestations
cystitis, pharyngitis, nasopharyngitis, upper respiratory tract infection,, bronchitis, sinusitis, Blood and
Lymphatic
disorders:
Disorders
Metabolism
& Nutrition
Disorders
Psychiatric
disorders
Disorders
Eye disorders
disorders
bradycardia, bundle branch block, nodal arrhythmia, supraventricular extrasystoles Vascular
disorders
Respiratory,
thoracic and
mediastinal
disorders
Gastrointesti
nal Disorders mouth
gastroesophagea stomatitis gastroenteritis l reflux disease, gastric atony, tongue disorder, tongue oedema dry skin, pruritus acne, urticaria, hair disorder, subcutaneous
disorders
Musculoskele
connective
tissue
disorders
Renal and
disorders
Reproductive
system and
disorders
disorders and
administratio
conditions
Investigations
blood aspartate, aminotransferase increased, blood alanine aminotransferase increased poisoning
and
procedural
complications
*Cannot be estimated from the available clinical data. Undesirable effects noted with other oxybutynin hydrochloride formulations: In addition, cyclopegia, mydriasis and suppression of lactation have been reported with the use
of other oxybutynin hydrochloride formulations.
4.9. Overdose
The symptoms of overdose with oxybutynin progress from an intensification of the usual CNS
disturbances (from restlessness and excitement to psychotic behaviour), circulatory changes
(flushing, fall in blood pressure, circulatory failure etc.), respiratory failure, paralysis and
coma.
2) physostigmine by slow intravenous injection: Fever should be treated symptomatically with tepid sponging or ice packs. 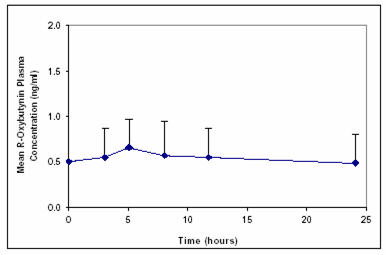 Based on two separate pharmacokinetic studies that evaluated the concomitant use of LYRINEL with an antacid and with a proton pump inhibitor, drugs that increase gastric pH do not affect the release of drug from the tablet or resulting plasma concentrations of oxybutynin and its metabolite, desethyloxybutynin. Dose Proportionality
Pharmacokinetic parameters of oxybutynin and desethyloxybutynin (Cmax and AUC) following administration of 5-20 mg of LYRINEL are dose proportional. Distribution
Oxybutynin is widely distributed in body tissues following systemic absorption. The volume of distribution is 193 L after intravenous administration of 5 mg oxybutynin chloride . Both enantiomers of oxybutynin are highly bound (>99%) to plasma proteins. Both enantiomers of desethyloxybutynin are also highly bound (>97%) to plasma proteins. The major binding protein is alpha-1 acid glycoprotein. Metabolism and Excretion
Oxybutynin is metabolized primarily by the cytochrome P450 enzyme systems, particularly CYP3A4 found mostly in the liver and gut wall. Its metabolic products include phenylcyclohexylglycolic acid, which is pharmacologically inactive, and desethyloxybutynin, which is pharmacologically active. Following LYRINEL administration, plasma concentrations of R- and S-desethyloxybutynin are 73% and 92%, respectively, of concentrations observed with oxybutynin. Oxybutynin is extensively metabolized by the liver, with less than 0.1% of the administered dose excreted unchanged in the urine. Also, less than 0.1% of the administered dose is excreted as the metabolite desethyloxybutynin. Food Effects
The rate and extent of absorption and metabolism of oxybutynin are similar under fed and fasted conditions. Special Populations
Gender: There are no significant differences in the pharmacokinetics of oxybutynin in healthy male and female volunteers following administration of LYRINEL. Geriatric: The pharmacokinetics of LYRINEL were similar in all patients studied (up to 78 years of age). Race: Available data suggest that there are no significant differences in the pharmacokinetics of oxybutynin based on race in healthy volunteers following administration of LYRINEL. Renal Insufficiency: There is no experience with the use of LYRINEL in patients with renal insufficiency. Hepatic Insufficiency: There is no experience with the use of LYRINEL in patients with hepatic insufficiency. 5.3. Preclinical Safety Data
A 24-month study in rats at dosages of oxybutynin chloride of 20, 80 and 160 mg/kg/day
showed no evidence of carcinogenicity. These doses are approximately 6, 25 and 50 times the
maximum human exposure, based on surface area.
Oxybutynin chloride showed no mutagenic activity when tested in Schizosaccharomyces pompholiciformis, Saccharomyces cerevisiae, and Salmonella typhimurium test systems. Reproduction studies with oxybutynin chloride in the mouse, rat, hamster, and rabbit showed no evidence of impaired fertility. 6. PHARMACEUTICAL
PARTICULARS
6.1. List of Excipients
LYRINEL also contains the following inert ingredients: cellulose acetate, hypromellose, ,
magnesium stearate, polyethylene glycol, polyethylene oxide 200K, polyethylene oxide 2000K,
Black iron oxide : lactose 95:5
5 mg: iron oxide green:lactose 95:5, opadry YS-1-12871-A light yellow 10 mg: red ferric oxide, opadry pink YS-1-14518-A 6.2. Incompatibilities
None known.
6.3. Special
Precautions for Storage
Do not store above 25°C . Keep container tightly closed. Keep out of the reach of children. 6.4 Nature and contents of containers