Virginia
Cooperative
Extension
PUBLICATION 354-312
Three-prong American ginseng plant.
Producing and Marketing Wild Simulated
Ginseng in Forest and Agroforestry Systems
Introduction
other hand, wild ginseng sells for over $300 a pound andthe market demand in Asia for wild roots is practically American ginseng (Panax quinquefolium, Araliaceaefamily) is a familiar plant to many people in the Southern unlimited. That market demand and price can not beeasily dismissed.
Appalachian region. For several generations, “diggingsang” has been an enjoyable and profitable activity for Within this publication, a system of growing ginseng many mountain people. American ginseng is native to called wild simulated ginseng production will be many states, east of the Mississippi River, in the United described. Using this production system, landowners may States. It prefers a cool, temperate climate and is only establish naturalized populations of wild American found in the mountainous regions of the Southern states.
ginseng on the forest floor in their privately-owned It also grows naturally in the Eastern provinces of woodlands. If managed correctly, these natural stands of Canada. Ginseng is a tender perennial. The first frosts ginseng will be perpetual. A natural stand of undisturbed of fall kill the leafy top, but a new top grows up the wild ginseng renews itself by self-seeding. Careful following spring, from an underground bud on the harvest of mature plants can take place, in wild simulated perennial root. It takes seven or eight years for American ginseng patches, without taking the site out of production.
ginseng plants to grow to maturity in a natural woodland Young seedling ginseng plants will just grow up to take their place. A carefully managed stand of naturalizedAmerican ginseng may produce income for several American ginseng is a complicated opportunity for forestfarmers to understand because it can be grown in several different production systems and because there is greatvariation in market demand and prices paid for the various Cultivated versus Wild Ginseng
grades of dried roots. It is a controversial plant. Wild In 1999, wild dried roots of ginseng sold for as much as harvest has depleted the natural population to such a $425 per pound. That price has doubled in the last 10 degree that it has become threatened with extinction in years. In 1999, quite a few pounds of field-cultivated, certain regions (Convention on International Trade in dried ginseng roots, produced under artificial shade, sold Endangered Species of Wild Fauna and Flora, CITES).
for $10 per pound. That price has been reduced by 75 Ginseng has a reputation as an aphrodisiac, which has percent in the last 10 years. Why should there be such a made it a comical rather than a credible plant. It is not difference in the prices paid for wild and cultivated easy to grow. A great deal of failure has occurred, in the ginseng? Most of the ginseng, grown or gathered from past, by landowners who casually scatter ginseng seeds the wild in the United States, is exported to Asian in their woods hoping to get rich without doing any work.
countries for sale. Hong Kong has traditionally absorbed The ginseng market is disorganized. Certain dealers try the bulk of North American ginseng, accounting for a to buy ginseng at low prices so they can sell it at high consistent 80 percent of all purchases of unprocessed root prices. The threat of human theft has made ginseng (Bozak and Bailey, 1995). Ginseng growers and production impractical in certain regions. There are gatherers in the United States and Canada produce about constant reports about the low prices being paid for four million pounds of dried roots for export to Asia each cultivated ginseng crops grown in Wisconsin. On the year. Apparently, the Chinese people prefer wild ginseng *Extension Specialist, Alternative Agriculture; Virginia State University Virginia Cooperative Extension programs and employment are open to all, regardless of race, color, religion, sex, age, veteran status, national origin, disability, or political affiliation. An equal opportunity/affirmative action employer. Issued in furtherance of Cooperative Extension work, Virginia Polytechnic Institute and State University, Virginia State University, and the U.S. Department of Agriculture cooperating. Lorenza W. Lyons, Administrator, 1890 Extension Program, Virginia State, Petersburg; J. David Barrett, Director, Virginia Cooperative Extension, Virginia Tech, Blacksburg. 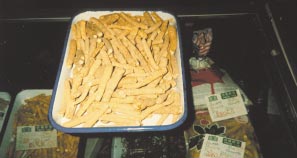 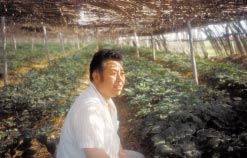 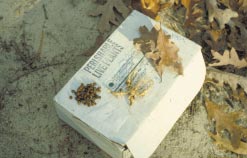 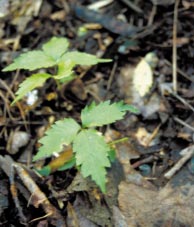 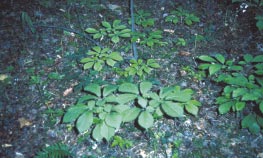 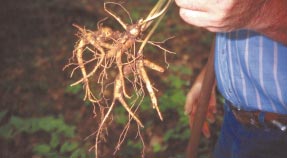 In selling dried roots of wild simulated ginseng, the Literature Reviewed
situation is totally different. It is hard to find any productthat is easier to sell. In Virginia, there are 45 certified Beyfuss, R. L. 1997. Ginseng Soil Characterization and ginseng buyers spread out across the state. These buyers Ecology Study. Cornell Cooperative Extension of Greene are regulated by the Virginia Department of Agriculture County, HCR 3, Box 906, Cairo, New York 12413.
and Consumer Services - Office of Plant Protection. Alist of the certified buyers can be obtained from that office Beyfuss, R. L. 1998. Growing Ginseng and Goldenseal (See literature review). All that a grower has to do is drive in Your Forest. Cornell Cooperative Extension of Greene to the buyer’s house or store or service station, carry the County, HCR 3, Box 906, Cairo, New York 12413.
roots in, watch as they are weighed and accept payment Bozak, G. and Bailey, W. G. 1995. Ginseng Production if he agrees with the price that is offered. If the grower In North America. Presented at the International does not like the price that is offered, he can take his roots Conference of Ginseng and Allied Plants, Harbin, to the next buyer down the road. A grower who has a large volume of roots to sell often will allow buyers tomake bids on his roots to get the highest price. Some CITES regulations. U. S. Fish and Wildlife Service, growers sell directly to large herb companies who buy Office of Management Authority, 4401 North Fairfax ginseng for export to Asia. In a few states, ginseng auctions have been organized to help both the buyers and the sellers. Current price information is easy to obtainfrom several sources. Marketing wild simulated Corbin, J. 1997. A Study of American Ginseng in American ginseng roots is easy because market demand Western North Carolina and East Tennessee. North is very strong for this scarce commodity. The only thing Carolina Department of Agriculture report.
a first time seller has to watch out for is country dealerswho might try to buy valuable ginseng at a low price.
Hankins, A. 1997. The Chinese Ginseng Industry. The Many of these country dealers also buy and sell guns, Business of Herbs. Vol. 25. Jemez Springs, New Mexico.
hunting dogs, furs, used car batteries, etc. They practicethe art of trading. If they make a low offer and the grower Konsler, T. 1983. Ginseng: A Production Guide for North Carolina. The North Carolina Agricultural ExtensionService Pub. AG-323. Raleigh, N. C.
Konsler, T. 1990. Lime and Phosphorus Effects onAmerican Ginseng: 1. Growth, Soil Fertility, and RootTissue Nutrient Status Response. Journal of AmericanSociety for Horticultural Science. Alexandria, VA.
Persons, S. 1994. American Ginseng: GREEN GOLD.
Bright Mountain Books Inc. Asheville, North Carolina.
Persons, S. 1998. Tuckasegee Valley GinsengNewsletter, P. O. Box 236, Tuckasegee, North Carolina28783.
828-293-5189 Freshly dug ginseng roots have three times more weight
than dried ginseng roots.
Virginia Department of Agriculture and ConsumerServices. Virginia Ginseng Management Program. Officeof Plant Protection, Endangered Species Coordinator, P.
O. Box 1163, Richmond, VA 23209804-786-3515

Proceedings of the International Symposia on Geoscience Resources and Environments of Asian Terranes (GREAT 2008), 4th IGCP 516,and 5th APSEG; November 24-26, 2008, Bangkok, Thailand Occurrence of Quartzarenite (Orthoquartzite) Clasts from Japanese Islands and Its Significance; Paleogeography Before the Opening of the Sea of Japan (Preliminary report) Ken-ichiro Hisada1*, Yuri Nuka