Proceedings of the International Symposia on Geoscience Resources and Environments of Asian Terranes (GREAT 2008), 4th IGCP 516,and 5th APSEG; November 24-26, 2008, Bangkok, Thailand Occurrence of Quartzarenite (Orthoquartzite) Clasts from Japanese Islands
and Its Significance; Paleogeography Before the Opening of the Sea of
Japan (Preliminary report)
Ken-ichiro Hisada1*, Yuri Nukariya1, Yuko Ito2 and Kosei Komuro1
1. Graduate School of Life and Environmental Sciences, University of Tsukuba, Ibaraki 305-8572, Japan2. JTB Tokyo Metropolitan Corp. Shinbashi, Tokyo 105-0004, Japan* Corresponding author e-mail: [email protected] Abstract
The conglomerate including quartzarenite (orthoquartzite) clasts occurs at the various places in Japan. In this paper,
Tetori, Muro and Soma clasts were examined using optical and cathodoluminescence microscopes. Based on the
paleogeography of Paleo-Japan before the opening of the Sea of Japan, the relationships between the clasts and
their provenance were examined.
Keywords: Quartzarenite, Orthoquartzite, Cathodoluminescence, Provenance, Japanese Islands
1. Introduction
northeastern Japan (Okami and Kano, 1982).
Orthoquartzite represents intense chemical weather- In this paper, we try to make comparison between ing of original minerals other than quartz, considerable quartzarenite clasts and source rocks using cathodolumi- transport and washing action before final accumulation nescence microscope and we elucidate the provenance and stable conditions of deposition (Bates and Jackson eds., 1987). It is well known that the sand may experi-ence more than one cycle of sedimentation before 2. Occurrence of Quartzarenite Clasts from
final accumulation, and orthoquartzite characterizes Japanese Islands
products at the peneplanation stage of diastrophism. The occurrence of quartzite arenite clasts is mostly Orthoquartzite has been used for 95 or more percent of pebbles and sometimes cobbles, and rarely boulders. detrital quartz fraction in sands or sandstones. However, In considering the geologic development of the Japanese the term “orthoquartzite” comes to cause some confu- Islands, it is likely that the source of quartzarenite clasts sion and other terms were needed. Most acceptable is found in various places must be Precambrian basement the term quartzarenite proposed by Gilbert (1954). In rocks underneath the Japanese Islands (e.g. Tokuoka, this paper, we use the term “quartzarenite”.
1970). The accretionary complex theory has been ac- In Japan, as the basement rocks problem of the cepted since 1980’s among Japanese geologists. Thus Japanese Islands, the quartzarenite clasts in the clastic the oldest rocks were dated as the Ordovician for the rocks were highlighted in the 1970’s, when the geosynclinal ophiolitic rocks and we have to reconsider the source of model was extensively accepted and widely prevailing the quartzarenite pebbles and cobbles. Also the opening among Japanese geologists. The quartzarenite clasts of the Sea of Japan occurred at around 15 Ma abruptly have been discovered in various places in the Japanese and rapidly, and that is, it is manifest that the Japanese Islands since 1967 (Figure 1). They are usual y well Islands were located along the easternmost edge of the rounded and most of them are grayish white or light Asian continent and were a part of it. Thus, the source gray in color and some have reddish or purplish tint. rocks of the quartzarenite clasts must be considered It has been believed that there was no opportunity to in the tectonic framework of the continent rather than form quartzarenite in and around the Japanese Islands which was developed as the typical mobile belt. Thus, In this paper, we studied the major occurrence we have to seek their provenance in the area outside localities of quartzarenite clasts; Tetori, Muro and Soma the Japanese Islands or the underlying and unknown areas. The fol owings are brief stratigraphic description basement rocks. Later, the probable source rocks for the quartzarenite clasts were found in the Soma area, 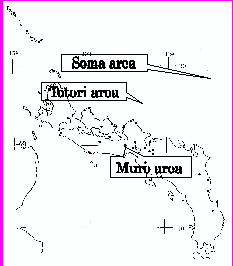