For a comprehensive list of our publications visit www.rce.rutgers.edu
An Integrated Approach to Insect Management in Turfgrass: Richard J. Buckley, Coordinator, Plant Diagnostic Laboratory; Albrecht M. Koppenhöfer, Ph.D., Extension Specialist, Turfgrass Entomology; and Sabrina Tirpak, Senior Lab Technician, Plant Diagnostic Laboratory Fig. 1. Developmental stages of the hairy chinch bug (courtesy of D. Shetlar) Introduction: The hairy chinch bug, Blissus
scattered patches, their feeding results in local- leucopterus hirtus Montandon, is one of the most ized turfgrass injury. The spots often coalesce destructive insect pests of New Jersey turfgrass.
into large areas of thinning, dead, or dying turf.
Hairy chinch bugs (HCB) are found in all of theNortheastern states, west to Minnesota, and south Moisture or heat stressed turf with thick thatch is to Virginia. They are also troublesome in Canada most susceptible to HCB injury. HCB injury from Ontario to the Atlantic Coast. These surface closely resembles drought injury or sunscald and feeding insects attack a wide range of grasses is often mistaken as such during the summer including Kentucky bluegrass, fine fescues, pe- when grass is in a dormant state. The first rennial ryegrass, bentgrass, and zoysia.
indication of injury is often when the grass fails torecover after irrigation or late summer rains. HCB Symptoms of infestation: Hairy chinch bugs
seem to prefer open sunny lawns with a high have piercing-sucking mouthparts, which they percentage of perennial ryegrass and/or fine fes- use to suck sap from and inject toxins into the crowns and stems of grasses. This type of feedingdisrupts the water-conducting system of the Insect Description (Fig. 1): HCB adults are black
grass, causing the grass to wilt, turn yellow, then with shiny white wings. There are long-winged brown and die. Because HCB generally occur in and short-winged adults. The ratio of these two forms varies considerably among populations.
emerge all life stages, mixed from the first and The shiny-white wings are folded flat over the second generation, can be found at the same time.
body so that the tips overlap in the long-winged The second-generation nymphs mature by Sep- adults. Each wing has a distinctive, triangular- shaped black marking in the middle of the outeredge. From these marking extend black lines in Monitoring: HCB are fairly easy to control if
an “X”-shaped pattern across both wings. HCB infestations are detected early. Lawns with a adults are slightly more than 3/64" (1 mm) wide history of HCB should be monitored, especially after warm dry springs. Larger nymphs and adultHCB can be detected by parting the grass at the interface of healthy and damaged turf and in- growth stages. Their length increases from 1/32" specting the lower stems and thatch.
(0.9 mm) in the first stage to around 1/8" (3 mm)in the fifth stage. Young nymphs are orange with The best sampling method for HCB is floata- a characteristic white stripe across their backs.
tion. A metal cylinder made from a can (e.g., Intermediate stages darken to an orange/brown large coffee can) by cutting off both ends is and the final stage is black. Wingpads become pushed through the thatch of the area to be apparent by the third stage. New HCB eggs are inspected and filled with water to the brim.
elongate, oval shaped, and white. They darken as Keep the water level above the grass foliage.
they age to a reddish color just before hatching.
Any HCB present will float to the surfacewithin a few minutes.
Seasonal History and Habits: In New Jersey the
HCB has two generations each year. Adults
Alternatively, take a small piece of sod using a overwinter in infested turf areas that still have golf course cup cutter or spade and place it in a enough undamaged grass to provide cover. They bucket of water to float up HCB. Adjust the are also found during winter in thatch, plant debris, number of HCB counted in the sample to 1 ft2. A and in or on other objects that border turf areas.
golf course cup cutter is 0.1 ft2, a square cut withthe blade of a spade is 0.25 ft2. The potential for The overwintering adults become active and leave injury is greatest when the population reaches 25 their hibernation sites when the temperature reaches 45°F (7°C). The HCB can fly, but migratesmainly by walking. Individuals feed and mate Degree-day models can be used to focus attention immediately. Females begin to lay eggs after to developing populations. Using a 50°F base about 2 weeks. Peak egg-laying occurs from early temperature, egg laying in spring starts at 198 to May through early June, about the time when 252 degree-days and the first eggs hatch at 522 to white clover is in early bloom. Females will lay about 170 eggs and live about 100 days.
Cultural control: The first step in a HCB
Egg hatch occurs after several weeks in early management program is plant resistance. Sev- spring and as few as 7 days in summer. The first eral turfgrass varieties, primarily perennial generation brood develops through the five ryegrasses and fescues that are infected with nymphal stages in 4 to 6 weeks between May and Neotyphodium endophytes, are resistant to mid-July. Emergence of the first-generation HCB. Certain Kentucky bluegrass cultivars adults occurs around the time when sumac is in have also been reported to tolerate feeding in- These adults lay eggs from mid-July through late Thatch reduction, proper fertilization, and regu- August. Once the second generation begins to lar irrigation can minimize HCB damage. 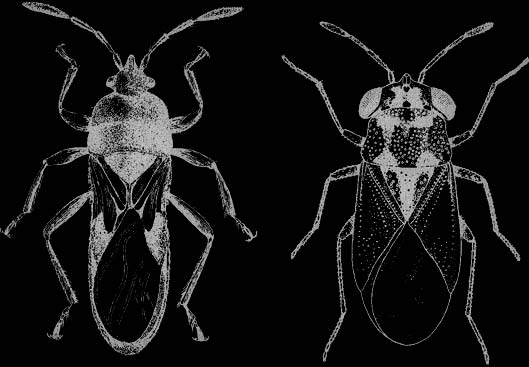 Natural mortality: HCB nymphs drown in great
early spring applications against overwintered numbers during spring rains. Furthermore, during females are often wasted because the pest may certain years winter mortality is very high due to not reach damaging levels. Restrict preventive desiccation. Generally, low humidity at low tem- applications to potential hot spots as determined peratures and high humidity at high temperatures contribute to the decline of HCB populations.
Either liquid or granular applications can be Natural enemies: After cool wet springs and
effective. For liquids, unless sufficient spray during warm moist summers, the insect patho- volume has been used, a light irrigation (1/8" = 3 genic fungus Beauveria bassiana can nearly mm) done before the spray dries will help move wipe out HCB populations. After killing the the insecticide into the thatch. If thatch and soil insect, the fungus covers the body with white surface are very dry, watering the day before mycelium and spores. Beware that fungicide application helps the spray to move into the applications will reduce this natural enemy of thatch. Granular applications should be made to HCB. Furthermore, at least eight species of dry foliage and followed by light (1/8") irrigation.
arthropods in the turfgrass fauna feed on the HCB The material can also be applied in a gentle rain including a predatory mite, big-eyed bugs, and or just before a predicted rainfall. Be sure to rotate ground beetles. It is always prudent to assess the materials of different chemical classes to reduce population of natural enemies in the ecosytem the chance for resistance development.
To aid in locating control products, active ingre-dients listed below are followed by trade names inparentheses. Be aware that the active ingredientsin these products may change. When purchasingcontrol products, always check the label for theactive ingredient. Always read instructions oninsecticide labels very carefully.
Effective insecticides for HCB control include theorganophosphates acephate (Orthene®, Ad-dress®), diazinon (Diazinon®; not for golfcourses, sod farms, turf areas > 1 A), chlorpyrifos(Dursban®; not for residential turf or where chil-dren may be exposed), the carbamate carbaryl(Sevin®), the pyrethroids bifenthrin (Talstar®, Fig. 2. Adult HCB (left), adult big-eyed bug (right) (From Ortho® Lawn Insect Killer Granules), cyfluthrin (Tempo®), deltamethrin (Deltagard®), lambda-cyhalothrin (Battle®, Scimitar®), and permethrin Chemical Control: The commonly accepted
(Astro®). Chlorpyrifos, deltamethrin, and lamba- period for HCB control is from June to August cyhalothrin are presently only available for com- when peak populations are active. Preventive Mention or display of a trademark, proprietary product, or firm in text or figures does not constitute an endorsementby Rutgers Cooperative Extension and does not imply approval to the exclusion of other suitable products or firms.
2004 by Rutgers Cooperative Research & Extension, NJAES, Rutgers, The State University of New Jersey.
Desktop publishing by Rutgers-Cook College Resource Center RUTGERS COOPERATIVE RESEARCH & EXTENSION
N.J. AGRICULTURAL EXPERIMENT STATION
RUTGERS, THE STATE UNIVERSITY OF NEW JERSEY
NEW BRUNSWICK
Distributed in cooperation with U.S. Department of Agriculture in furtherance of the Acts of Congress on May 8 and June 30, 1914. Rutgers Cooperative Extension works in agriculture, family and community health sciences, and 4-H youth development. Dr. Karyn Malinowski, Director of Extension. Rutgers Cooperative Research & Extension provides information and educational services to all people without regard to race, color, national origin, gender, religion, age, disability, political beliefs, sexual orientation, or marital or family status. (Not all prohibited bases apply to all programs.) Rutgers Cooperative Research & Extension is an Equal Opportunity Program Provider and Employer.

Bausch & Lomb is the eye health company dedicated to Perfecting Vision and Enhancing Life®Bausch & Lomb offers the world’s most comprehensive portfolio of eye health products and we’re proud that ours is one of the oldest, best known and most respected healthcare brands in The company began in 1853 in Rochester, New York, as a small optical shop that grew to become a multi-bil