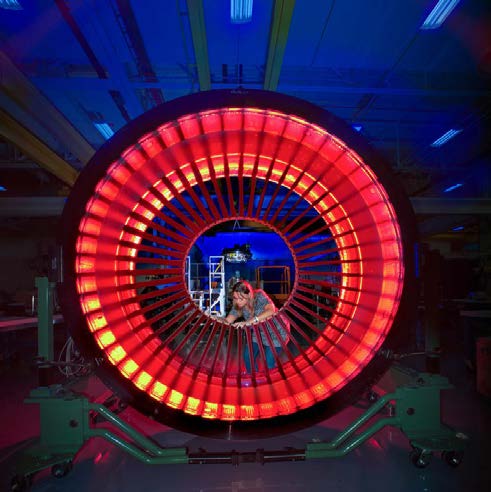 Reshaping Flight for Fuel Efficiency: Five Technologies on the Runway Beyond The Boeing Dreamliner 787: A New Thrust to Curb Soaring Emissions. Super-efficient geared turbofans like the one shown on the left during the assembly of a Pratt & Whitney PurePower engine are one of many strategies currently being tested to help commercial aircraft become more fuel efficient. A half-mile per gallon might seem like dreadful fuel economy, but
for vehicles carrying hundreds of passengers at high altitude, it
marks a huge advance in efficiency.
For U.S. airlines, domestic flights now average 0.54 aircraft-mile
per gal on of jet fuel (0.23 kilometer per liter), an increase of more than 40 percent since 2000. There's also been progress
for the heavier jets on international flights: a 17 percent improvement to 0.27 mpg (0.12 km/l.)
Air traffic worldwide is increasing so rapidly that global carbon dioxide emissions from aviation, which now represent just 2 to 3 percent of all CO2 pollution, could jump as much as 500 percent by 2050, according to one forecast. And for most airlines, fuel costs have surpassed labor costs as their largest expense, about 40 percent of operations, or $47.3 billion last year for U.S. carriers. Renewable jet fuel is available, but currently it is even more expensive than the petroleum-based kerosene it replaces. That's why the aviation world is looking at technologies, shapes, and materials that would transform flight far more dramatically than the advances embodied in Boeing's 787 Dreamliner, which before it was grounded in January was one of the world's most fuel-efficient commercial airliners. The Dreamliner uses 20 percent less fuel per mile than the similar-size Boeing 767, thanks mainly to improved aerodynamics and the use of lightweight composite materials. Boeing also relied on a powerful lithium-ion battery so it could replace some mechanical components with electronics to cut the plane's weight. But two nasty battery incidents—one overheated on a runway in Boston, while another caught fire, forcing an emergency landing in Japan—led to the grounding of all 50 Dreamliners in operation. Boeing has taken steps to rewire the batteries to prevent them from overheating, and will also encase them in heavy-duty steel boxes that vent outside the aircraft. The U.S. Federal Aviation Administration recently approved the modifications, and the Dreamliners are expected to be back in the air soon. The U.S. National Transportation Safety Board is holding investigative hearings on the battery this week. While the Dreamliner moves closer to retaking the skies, here are five new technologies—including one that will debut within months—that could soar far higher in fuel efficiency. Geared Turbofan Engine
Connecticut-based engine-maker Pratt & Whitney, a division of United Technologies, tried a radical approach for making
turbofan engines more efficient—adding a gear. The resulting fan-drive gear system engine, more than a decade in the
making, can cut fuel use by up to 16 percent. "That's huge," says Magdy Attia, a professor of aerospace engineering at
Florida's Embry-Riddle Aeronautical University. "It's a real game-changer." 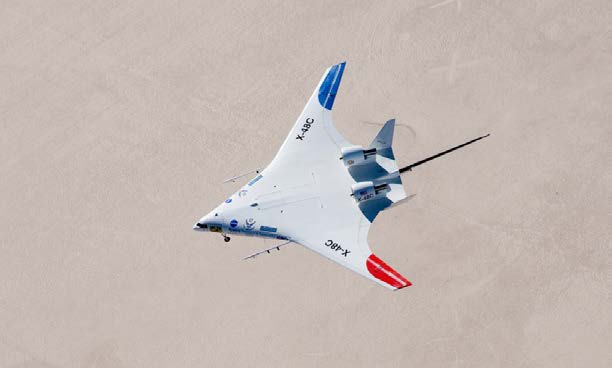 The use of the "blended-wing" design seen here on this Boeing X-48C Hybrid Wing Body demonstration aircraft, when used with lightweight materials, could improve aerodynamics on commercial airliners. It wasn't a new idea. Honeywell years ago used geared engines for very small private jets, but never advanced the technology. That's probably because it's difficult to do, Attia says. The 250-pound (113.4-kilogram), 18-inch (45.7-centimeter) gearbox has 30,000 horsepower passing through it, meaning there is a lot of heat to manage and expel quickly. And most aeronautical engineers aren't experts in gearboxes. But Pratt focused on making a geared engine that works, and the payoff has been huge. Five manufacturers—including Airbus, Bombardier, and Embraer—have so far placed orders for 3,500 PurePower engines. According to Attia, an engine-maker typical y has to sell 350 units before it starts recouping its investment in developing a new engine. So already the geared engine is a success, well in advance of its June debut aboard the new Bombardier C Series planes. Pratt & Whitney says the PurePower line of engines will be able to cut carrier operating costs by 20 percent (or about $1.7 million per plane per year), dampen noise levels by half, and cut CO2 emissions by 3,600 metric tons a year. Why does the gear improve efficiency? Modern turbofan engines create thrust by expelling fast-moving hot gases from their core. But they also use their fans to push slower air around the outside of the engine, so it mingles with the faster hot gases at the rear, increasing thrust. Typically, engines have a bypass ratio of 8:1; eight pounds of the air hitting the engine bypass the core for every pound that enters. The higher the bypass ratio, the greater the engine's thrust and efficiency. Pratt's geared engine has a ratio of 12:1. A jet engine's fan works more efficiently at slower speeds than does the core's turbine, and the gearbox allows the two to spin independently, each at its optimum speed. Accordingly, PurePower engines have larger fans, and smaller, lighter turbines. The geared engine does come with its own unique set of problems, however. With a larger fan, it cannot be retrofitted beneath the wings of existing aircraft. All the planes that will use it will be new, designed especial y to accommodate the fatter fan. Moreover, gearboxes have metal-on-metal moving parts, which jet engines don't have. Attia expects that will require carriers to schedule more frequent inspections and require them to look for cracks and fatigue that they don't have to worry about now. The first PurePower engines are designed for single-aisle jets. But Attia says their "true potential" would be fully realized if they were used on larger, 777-size aircraft. "At that size, the savings would be just astronomical." Pratt, in an email response to questions from National Geographic News, certainly indicated larger engines are in the pipeline. Eventually. Said Pratt: "We have not yet announced a definitive timetable for a Pratt & Whitney Geared Turbofan widebody engine." Composite Ceramics
While Pratt opted for a major design change to improve jet engine efficiency, other researchers are focused on materials,
especially those that would allow for hotter combustion. In fact, one of the primary ways engine-makers have improved jet
efficiency so far has been finding ways to burn the fuel and air mix inside turbofan jet engine combustors at hotter
temperatures, while developing nickel-based alloys that can withstand the heat. But there's been a problem with this
approach. "We have hit their thermodynamic limit," Robert O. Ritchie, a materials scientist at the U.S. Department of Energy's
Lawrence Berkeley National Laboratory in California, says of those alloys. That's around 1,150°C (2,102°F). "If we go much
hotter, they (engine turbine blades) will literally melt."
So researchers have turned to a material found in most cupboards: ceramics. 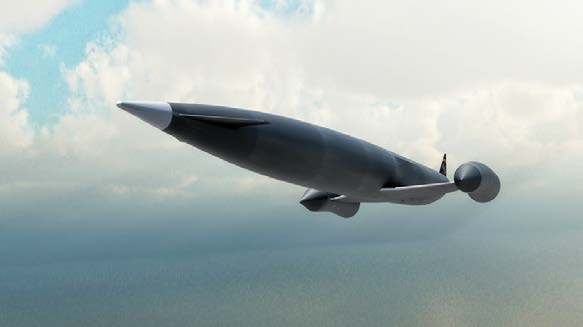