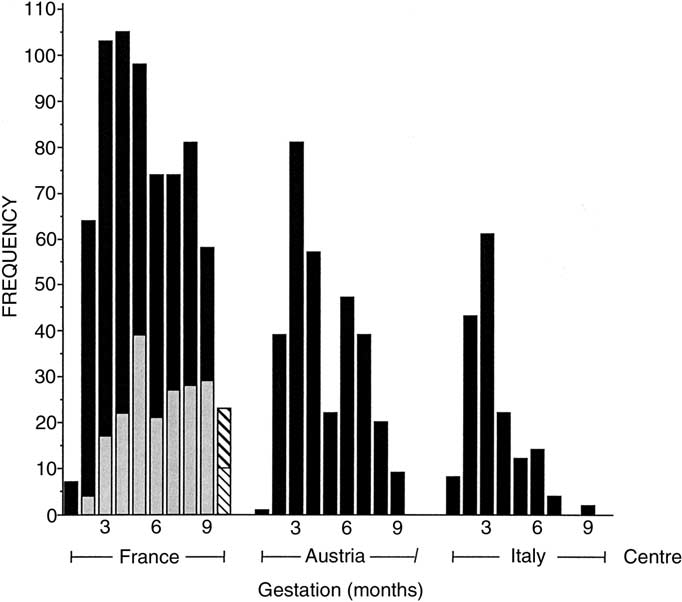 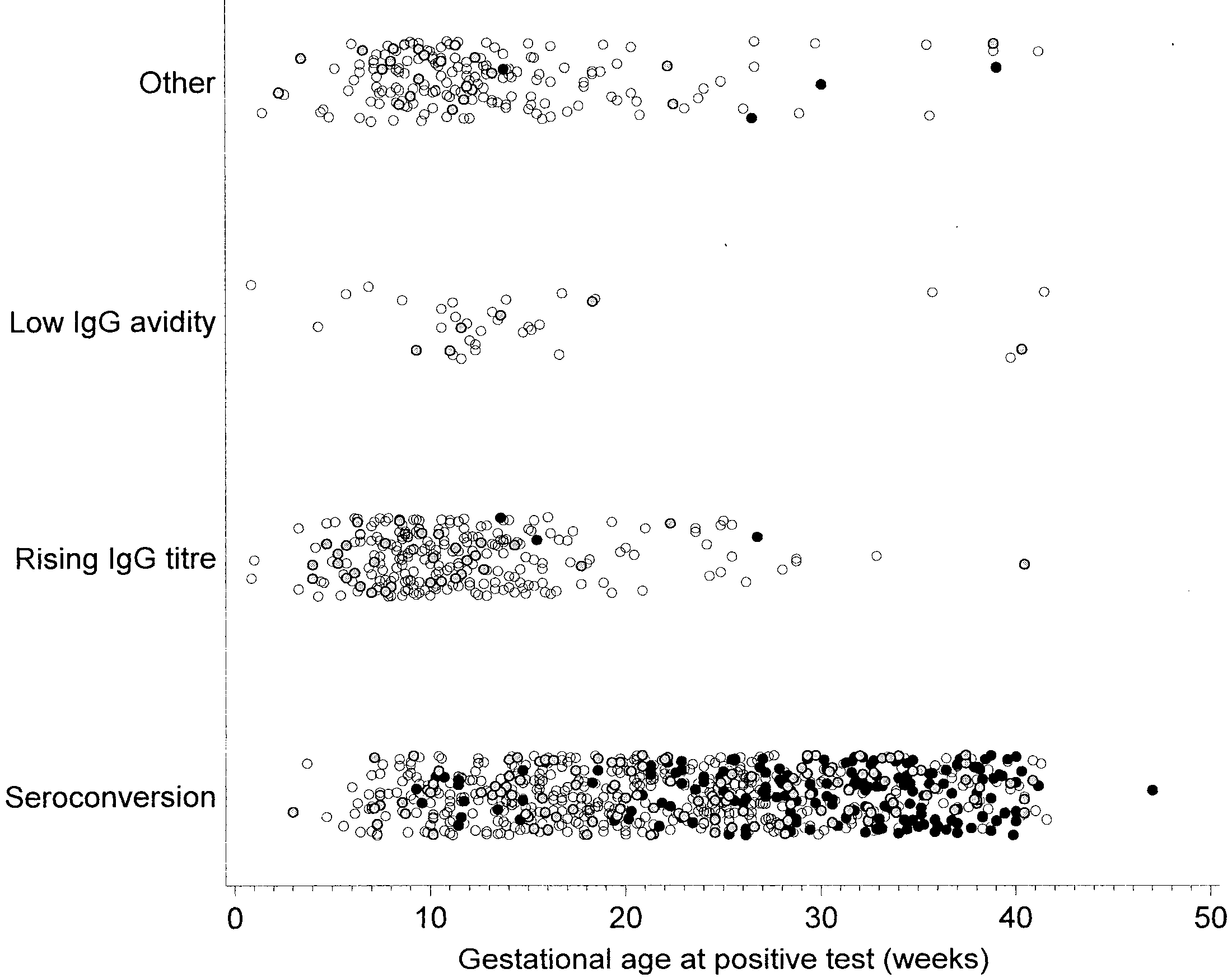 PRENATAL TREATMENT TO PREVENT CONGENITAL TOXOPLASMOSIS firmation of maternal infection, 1 was seropositive during aprevious pregnancy and 22 had fetal diagnosis beforestarting treatment. Of the 11 twins, only the first bornwas included in the analyses. The total of 1208 mother –child pairs analysed included 16 miscarriages or stillbirthsand 21 terminations (17 for toxoplasmosis). There werethree postnatal deaths.
The mean maternal age was 28.4 years (SD 4.9). In 53% (601/1144) this was their second or subsequent delivery.
Symptoms of lymphadenopathy were reported in 82 women(7%).
Table 2 shows that 62% (743/1208) of women serocon- verted during pregnancy. Of these, 39% (288/743) wereIgG negative and IgM positive at their first positive testindicating seroconversion close to the first positive IgMdate. The remaining 38% (465/1208) were identified bytests for recent infection which included IgG and IgMpositive results at the first pregnancy test and in descendingorder of priority: rising IgG titre in 252, low IgG avidity in Fig. 1. The number of women is shown for each country according to 35 and other criteria in 178 (e.g. IgA positive, high IgG month of gestation at their first positive test. In Paris, enrollment was restricted to seroconverting women (shown in grey). The diagonal shadingdepicts women whose first positive test was at or after delivery.
Figure 1 shows all mother – child pairs by country and gestational age at the first positive test. Except for Paris, The study complied with research ethics requirements in where only seroconverting women were enrolled, the distribution was skewed towards early pregnancy. Figure2 shows the number of women identified by seroconversionand tests for recent infection (rising IgG titre, low IgG avidity and other) by gestational age at first positive test,and child’s infection status. Only seven infected children A total of 1260 mother – child pairs were enrolled were born to the 465 (1.6%) women identified by tests for between 1996 and 2000. Of these, 52 pairs were excluded: 15 were lost to follow up before pregnancy outcome, 11 Figure 3a shows the estimated number of seroconverting were referred for fetal infection, 3 had inadequate con- women for each week of gestation. Women identified by Fig. 2. The scatter plot shows mother – child pairs detected by seroconversion or by tests for recent infection defined as IgM and IgG positive and: rising IgGtitre, low IgG avidity or other (e.g. IgA positive, high IgG titre). Categories are exclusive in order of priority (seroconversion excludes all others). Mother –child pairs are plotted against the weeks of gestation at the first positive test. Black dots indicate children with congenital toxoplasmosis, white dotsuninfected children and grey dots children with missing data for congenital infection status.
D RCOG 2003 Br J Obstet Gynaecol 110, pp. 112–120 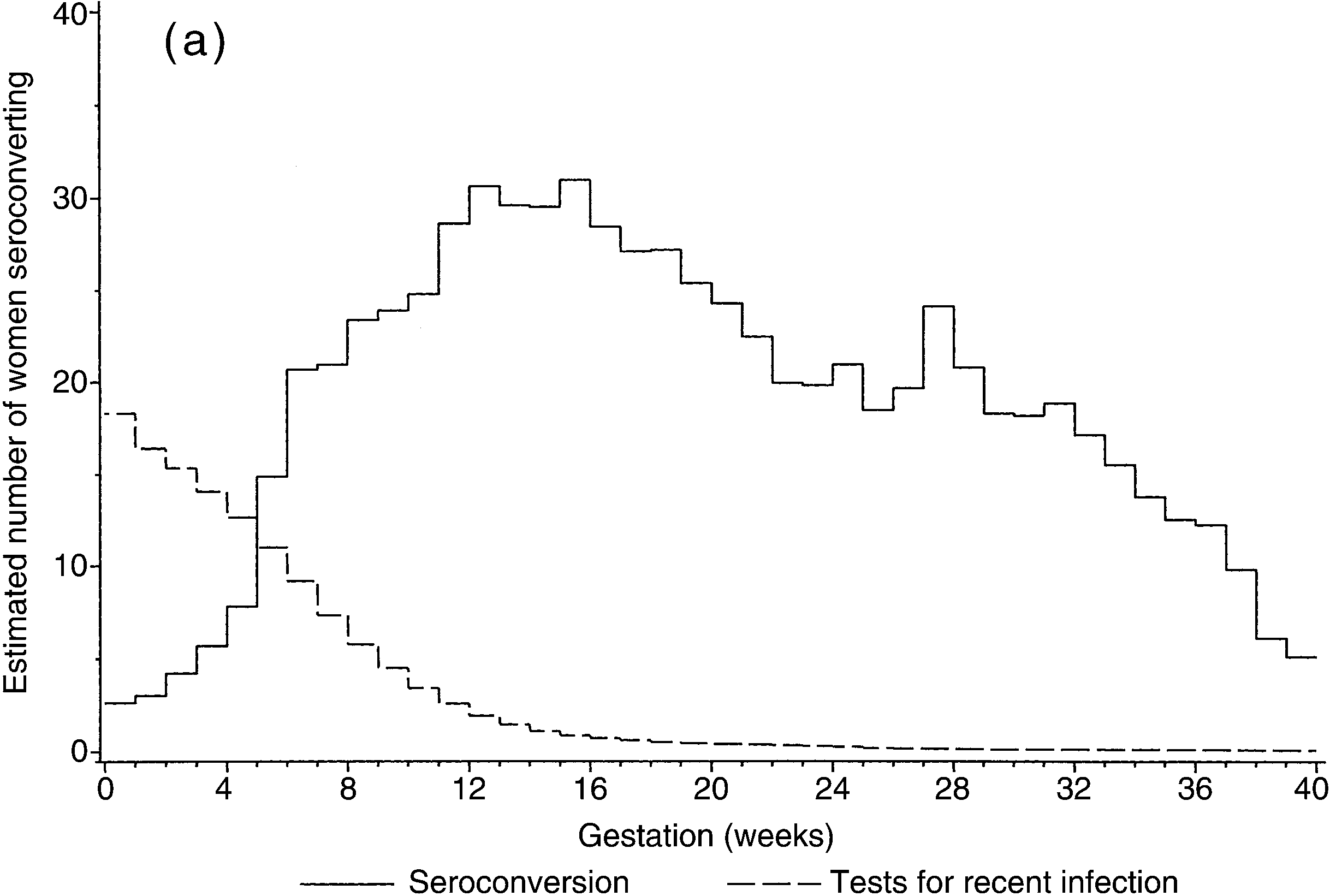 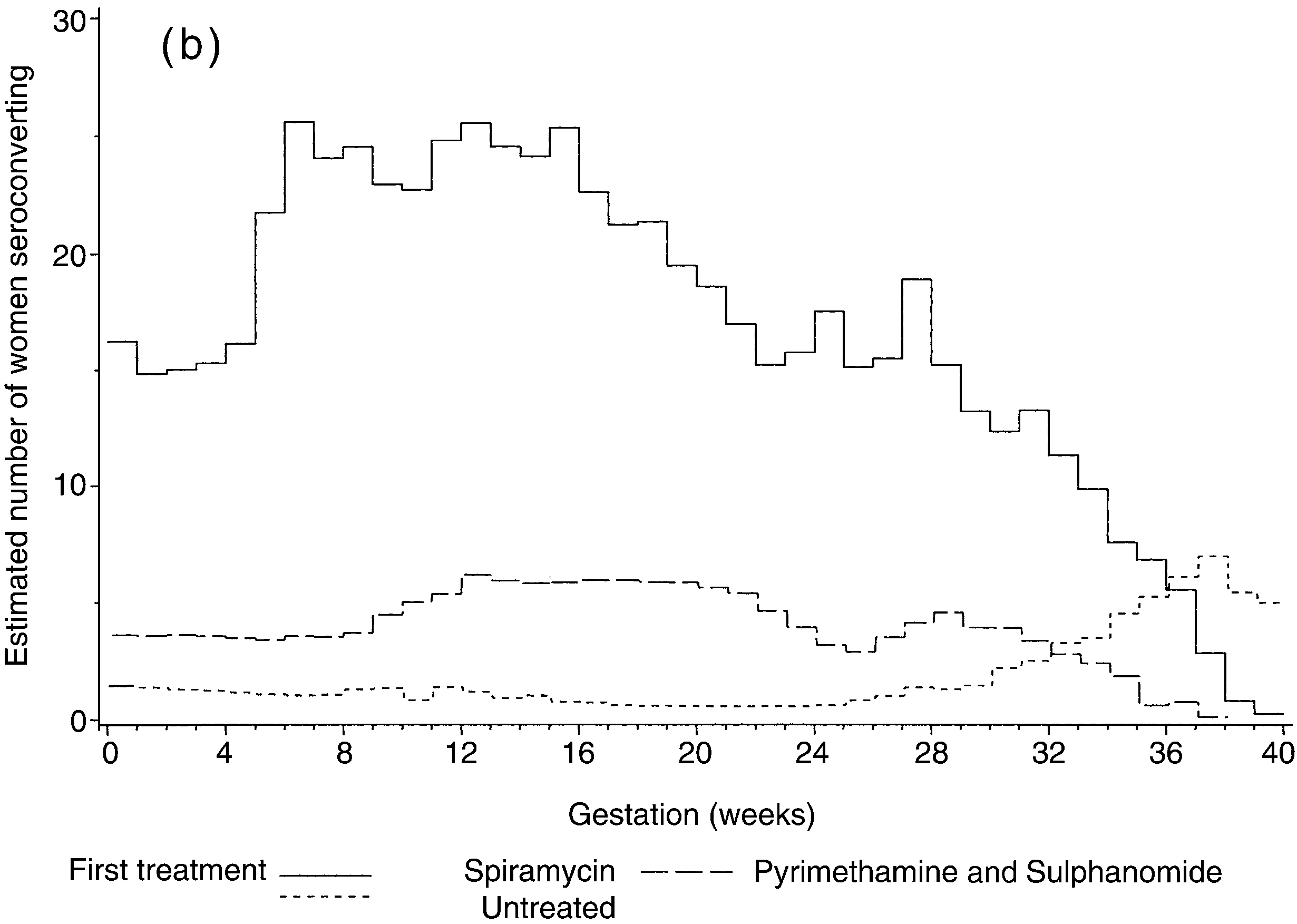 Fig. 3. The estimated number of women is plotted against the gestational age at seroconversion (weeks) according to: (a) criteria for detecting maternalinfection (seroconversion or tests for recent infection); and (b) treatment status (spiramycin, pyrimethamine – sulphonamide or no treatment).
tests for recent infection largely contributed information in results and/or postnatal serology in 159/181 children (in early pregnancy before the first prenatal test. Although the 22, only gestation at seroconversion was available). The number of women enrolled by this method was large (465), risk of mother to child transmission is shown in Fig. 4: the their probability of postconceptional seroconversion was risk was 9% (6.8 – 12.6) for women who seroconverted at low. For women identified by this method before 21 weeks, 12 weeks of gestation and 83% (75.5 – 88.4) at 40 weeks of the probability of postconceptional seroconversion was gestation. Transmission risk, adjusted for gestation at sero- conversion, did not differ significantly between countries Table 2 shows the proportion of children with congenital (Austria vs France, P ¼ 0.08; Italy vs France P ¼ 0.13).
toxoplasmosis for each centre. Classification was based on Table 3 shows the number of women according to the complete data in 1027/1208 (85%) children of whom 17% type of prenatal treatment prescribed. Two-thirds were (179/1027) had congenital toxoplasmosis. For the remain- prescribed spiramycin alone and just over one-quarter were ing 181 children (154 live born) with missing outcome prescribed pyrimethamine – sulphonamide. There were few data, the probability of congenital toxoplasmosis (24.4%, untreated women (8.8%, 106/1208). Similar proportions of 44.2/181) was estimated using the pre-test probability of treated and untreated women were identified by serocon- transmission based on gestational age at maternal serocon- version. Of 89 women who changed from spiramycin to version, combined with the likelihood ratios for PCR pyrimethamine – sulphonamide, most (77%, 69/89) had a D RCOG 2003 Br J Obstet Gynaecol 110, pp. 112–120 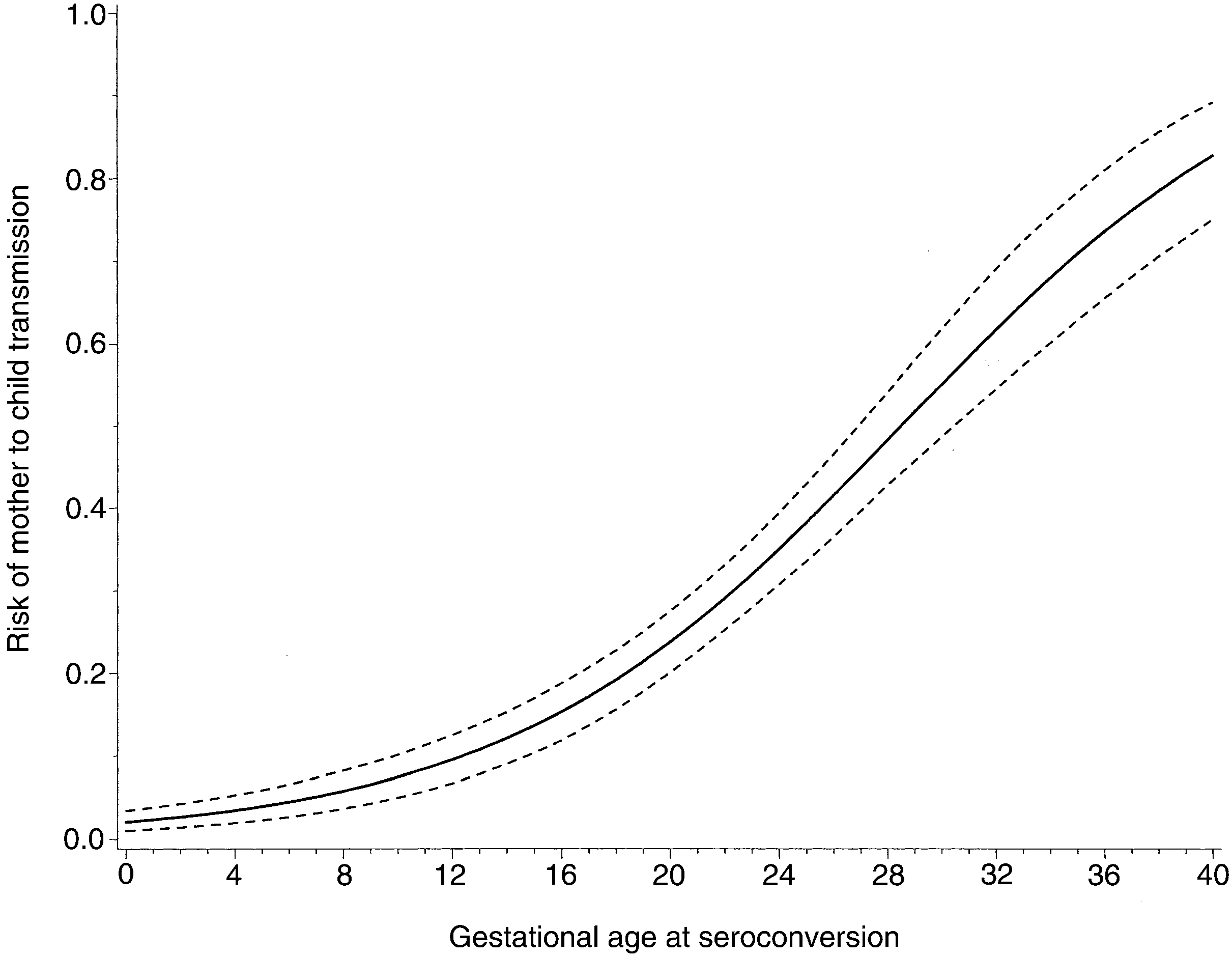 premature closure of ductus arteriosus, therefore, it shouldnot be used in the third trimester of pregnancy, it should alsobe kept in mind that inhibition of prostaglandin synthesis canalso cause increase in delivery time. Nursing Mothers: Xoxilum (meloxicam) has been shown to be excreted in milk of lactating rats. Therefore the use otXoxilum (meloxicam) should be avoided in lactating womenor