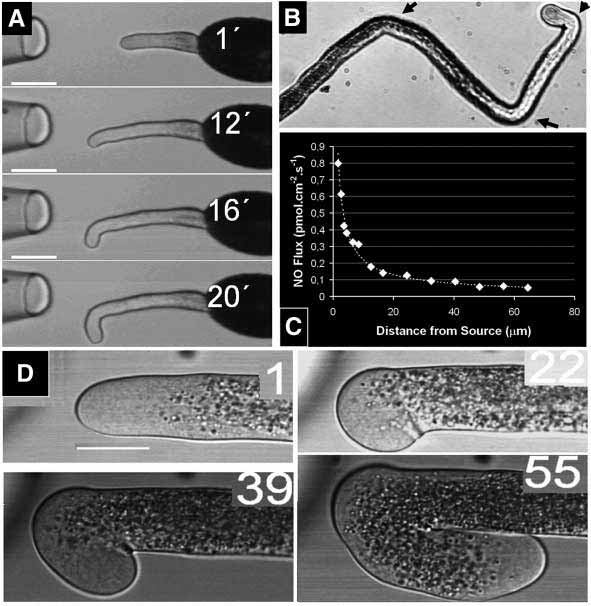 NO-mediated regulation of pollen tube growth 2709 to deliver NO specifically to the tip. A glassmicropipette was loaded with an agarose solutioncontaining the NO donor SNAP (s-nitroso-acetylpenicillamine), allowing the molecule to diffuseto the medium and establishing a gradient in thevicinity of the growing pollen tube tip. The pointdiffusion gradient was allowed to settle in liquidgermination medium and the growing pollen tubeswere then placed 60 μm away facing the pipette tip andgrowth was recorded by time-lapse videography. Aspollen tubes move into the gradient, their growth isreduced or, in some cases, completely abrogated. After12-15 minutes pollen tube growth resumes, but with thegrowth axis sharply rotated by an average angle of97.7±3.6° (mean±s.e.m.; n=28), an angle that is similarto the curvatures observed when pollen tubes targetovules in lily (Janson et al., 1994) and Arabidopsis(Shimizu and Okada, 2000), but remarkably sharperthan that produced by any other treatment to lilly pollentubes. After the new growth axis is re-established,pollen tubes achieve a normal growth rate (Fig. 1A).
The same pollen tube could be induced to re-orient itsgrowth axis several times by repeated exposure toexogenous NO (Fig. 1B; arrows indicate the position ofthe source). The formation of an NO gradient by SNAPwas confirmed by measurement with a self-referencingvibrating polarographic microelectrode selective forNO. A typical exponential-decay diffusion field from Fig. 1. (A) Time-lapse sequence of a Lilium longiflorum (lily) pollen tube
the point source was observed (Fig. 1C). These growing facing an extracellular NO point-source (SNAP on agarose; left on measurements indicate that the extracellular activation the image). Pollen tube slows as it moves into the NO-gradient, but direction threshold for the reorientation response is on the order proceeds unchanged for ~12 minutes. A new growth axis then starts to be of 5-10 nmol l–1, or a flux of 0.1-0.2 pmol cm–2 s–1, defined, forming a sharp right angle from the original axis (97.7±3.6°, n=28).
values well within the physiological range of NO action The pollen tube then regains normal growth rate (16-20 minutes). Scale bar: (Ignarro, 2000; Lamattina et al., 2003). The re- 30 μm. (See Movie 1 at http://dev.biologists.org/supplemental) (B) Lily orientation was maintained after addition of catalase pollen tube showing three consecutive re-orientation responses induced bymoving the same source to the locations marked with arrows. The growth and superoxide dismutase (SOD), excluding the axis changed reproducibly by right angles after each challenge by the NO possibility of chemical reactions between NO and source in front of the pollen tube tip. (C) Artificial NO source measurements reactive oxygen species (ROS), and the subsequent using a vibrating self-referenced polarographic probe to NO. The graph secondary production of NO-derived molecules, such shows a typical exponential NO gradient decay from the point source at different step distances. Although variations between sources were detected, More importantly, the re-orientation was totally these measurements show that within the effective distance (see A) the NO abrogated by addition of the specific NO scavenger concentration is in the range of 5-10 nmol l–1, and the NO flux is in the range CPTIO, a condition in which pollen tubes were of 0.1-0.2 pmol cm–2 s–1 (values well within the physiological range accepted observed to grow at normal rates inside the SNAP- for NO action). (D) Time-lapse sequence of a pollen tube being challenged containing pipette (intracellular data on the CPTIO with a diluted NO artificial source in the presence of sildenafil citrate(ViagraTM) (numbers in the top right-hand corner represent minutes after detection of the response). Using these diluted sources, most pollen tubes do cGMP mediates pollen tube re-orientation
not show any response, often growing into the pipette. For this experiment,pollen tubes were first incubated on standard medium and challenged with the response
diluted NO source. If a pollen tube showed no response, i.e. if it was The re-orientation of the growth axis in the presence of demonstrated to be insensitive to such low amounts of NO, the medium was an external gradient lead us to further investigate the perfused with sildenafil citrate and the same pollen tube is challenged with existence of downstream messengers of NO. In animal the same NO source. Despite the lower amount of NO, reverse re-orientation cells, NO effects can be mediated by cGMP- angles were observed in the presence of sildenafil citrate (109.8± 9.8°, n=9) independent signaling pathways (Ignarro, 2000), and it showing a sensitization effect, from unresponsive to the peak response (see is well established that this second messenger conveys movie 1 at http://dev.biologists.org/supplemental).
NO signaling in a number of physiological conditions.
cGMP levels are modulated by NO in animal cells, and number of described effectors of its activity: IBMX, a general equilibrium concentrations of cGMP are dependent on NO- inhibitor of the PDE family, and sildenafil citrate (SC; activated guanylate cyclases (GC) and breakdown activity of VIAGRATM), a drug that inhibits cGMP degrading phospodiesterases (PDEs). Although these enzymes have not phosphodiesterases (PDE5 and PDE6) in mammals (Corbin been well characterized in plants, we tested the effects of a and Francis, 1999). The use of IBMX at different 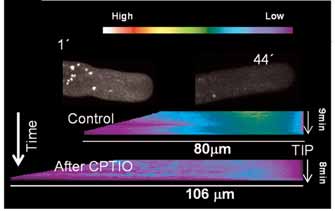 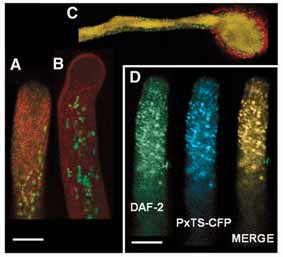 concentrations promoted the occurrence of diverse tip exogenous NO on pollen tube growth is mediated by cGMP, abnormal or subnormal morphologies, pointing to the and that this second messenger is in the signaling cascade that occurrence of pleiotropic effects (data not shown). Although affects the growth regulation mechanism.
the drug clearly disrupted growth regulation, the pleiotropicresponses made it difficult to isolate or test its specificity to the Nitric oxide is produced in peroxisomes
Once a re-orientation response takes place, we asked whether SC, however, has recently been shown to delay flower this means that the extracellular NO challenge induces this senescence (Leshem, 2000). If the re-orientation response of response by modulating the intracellular NO levels. To address pollen tubes to exogenous NO involves cGMP and if SC this question, we searched to see if NO was endogenously inhibited cGMP degradation in plants, the drug should produced in pollen tube. Live cells were loaded with the sensitize pollen tubes to NO and/or prolong the re-orientation NO sensitive fluorophore, DAF2-DA (4,5-diaminofluorescein response. To test this possibility we exposed pollen tubes to diacetate) and imaged by confocal or two-photon microscopy suboptimal doses of SNAP. The criterion to validate this (Fig. 2). This probe was previously shown to be NO-specific experiment was the detection of pollen tubes insensitive to a in plant tissues (Foissner et al., 2000). Fluorescence was found less concentrated NO source. Thus, pollen tubes that were throughout the cytosol, although in the region subjacent to the previously shown not to re-orient its growth axis on a tip it was very low (Fig. 2, 1′). A very strong signal was found lower SNAP concentration were submitted to a SC final in round organelles of about 2 μm diameter (Fig. 2, 1′). The concentration of 339 μM. Under these conditions, eight out of spatiotemporal dynamics of intracellular NO (iNO) are shown nine pollen tubes (n=9) showed re-orientation after addition of in the form of kymographs in which we averaged an active SC, and some even re-oriented to previously never observed representative region inside each pollen tube at each time-point angles of 180° (Fig. 1D). We further confirmed this result by as a color-coded line, and plotted these lines as a function of measuring an increase of the average re-orientation angle to time (YY′ axis) and pollen tube length (XX′ axis) (Fig. 2). For 120°±12 (n=9). This angle is 25% steeper than the control but, the sake of clarity, the pollen tube tips were right-side aligned, more significantly, is obtained with much lower concentrations and therefore the slope on the left side of the kymograph of NO. Dose-response curves of SC also showed a dose- reflects the pollen tube growth rate. In non-challenged pollen dependent stimulatory effect of ~30% on the growth rate of tubes, no significant variation over time is seen. NO levels are pollen tube at 50 μM. This finding suggests that the effect of very low in the tip and highest in the subapical domain(control; Fig. 2). To validate the specificity of the observedsignal, the NO scavenger CPTIO [2-(4-carboxyphenyl)-4,4,5,5-tetramethylimidazoline-1-oxyl-3-oxide] was applied in Fig. 2. Detection of intracellular NO in a growing pollen tube of lily
using the NO-specific fluophore DAF2-DA (1′). Fluorescence is seen
in the cytosol, with less intensity in the apical domain, and is very
bright on round cytoplasmic organelles. The spatiotemporal
dynamics of intracellular NO is shown in the form of kymographs in
which we averaged an active representative region inside each pollen
tube at each time-point as a color-coded line (see top wedge), and
plotted these lines as a function of time (y-axis) and pollen tube
Fig. 3. The DAF-2DA-positive organelles are peroxisomes.
length (x-axis). For the sake of clarity, the pollen tube tip was aligned (A-D) Confocal images of growing lily pollen tubes incubated in with the right side, and therefore the slope on the left side of the DAF-2DA (green) and in organelle-specific dyes (red). No co- kymograph reflects the growth rate. The chronological order of each localization was found in the endomembrane system (A, BodipyTR), time point is read from top to bottom as illustrated by the arrow on mitochondria (B, Rhodamine 123) or acidic organelles (C, the y-axis. In a non-challenged pollen tube (control), no significant LysotrackerRed). (D) Peroxisomes were then tagged by transient variation along time is seen. Apical depletion and subapical transformation of pollen grains with a construct containing the accumulation of NO are clearly visible. Incubation with the NO- pollen-specific LAT52 promoter driving an ECFP-peroxisome scavenger CPTIO (44′) almost suppressed the signal from the targeting signal (PxTS) fusion. Pollen tubes were observed 10 hours cytosol, but the round organelles are still distinguishable. Kymograph after germination. The NO-producing organelles (DAF-2, green) analysis shows the overall decrease after CPTIO addition, but the show an almost complete co-localization with the ECP signal (PxTS- apical/subapical pattern, polarity and dimensions are maintained.
CFP, blue), as shown in the merged image. Scale bars: 15 μm. 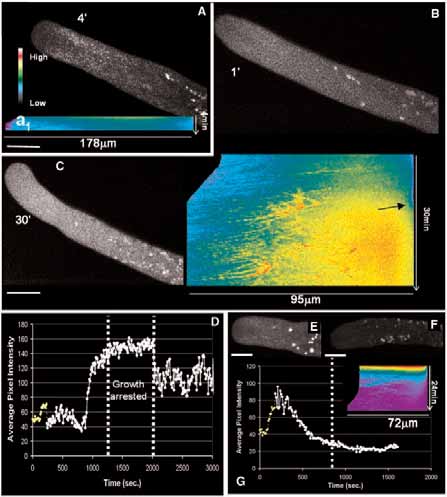