Microsoft word - malaria is a serious.docx

MALARIA: Malaria is a serious, infectious disease spread by certain kinds of mosquitoes. It is common in tropical climates and is characterized by chills, fevers, and an enlarged spleen. These symptoms reappear again and again. The disease can be treated with medication, but it tends to come back even after being cured. Malaria is endemic in many developing countries. CAUSES OF MALARIA. Malaria is caused by four different kinds of parasites belonging to the plasmodium family. A parasite is an organism that lives off another organism. Animals can also get malaria, but malaria cannot be passed from humans to animals or from animals to humans. Malaria is transmitted by female mosquitoes that carry the parasite in their bodies. When the mosquito bites a human, it injects a small amount of its saliva into the human's bloodstream. The saliva contains parasites that travel through the person's bloodstream to his or her liver. There, the parasites reproduce. Eventually, they leave the liver and travel back into the bloodstream. Once in the bloodstream, they begin to cause the symptoms of malaria. Malaria cannot be passed directly from one human to another. It can be transmitted by a mosquito. A mosquito may bite a person infected with the malaria parasite. When it sucks the person's blood, it takes in some of the parasites. If the same mosquito bites a second person, it may transfer those parasites to the uninfected person. Malaria can also be transmitted through blood transfusions. If an infected person donates blood, the blood will contain malaria parasites. If the blood is put into another person's body, the parasites will also flow into his or her bloodstream. For this reason, blood donors are often screened for the malaria parasite before they are allowed to give blood. The incubation period for malaria varies considerably. An incubation period is the time between the mosquito bite and the time symptoms of malaria begin to appear. The 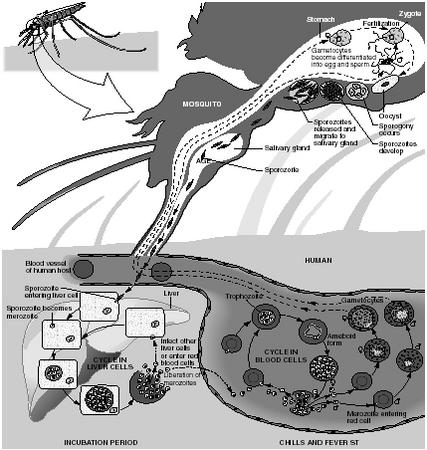 incubation period differs depending on the kind of parasite involved. For the most serious form of malaria, the incubation period is eight to twelve days. In some rare forms of malaria, the incubation period can be as long as ten months. A person infected with malaria passes through three stages of very distinctive symptoms. The first stage is characterized by uncontrollable shivering for an hour or two. In the next stage, the patient's temperature rises quickly. It may reach for a period of up to six hours. In the third stage, the patient begins to sweat profusely, and his or her temperature drops rapidly. Other symptoms may accompany these stages. They include fatigue, severe headache, nausea, and vomiting. After the third stage, the patient often falls asleep from exhaustion. The three stages are often repeated the following day, two days later, or at some later time. In many cases, a person experiences a repetition of the stages again and again during their lifetime. Some people go many years before the symptoms repeat.The most serious forms of malaria can result in death in a matter of hours. The parasites attack a person's red blood cells and change their structure. The cells become very sticky and begin to clump together. As they do, they may block blood vessels in vital organs, such as the kidneys and spleen. These organs may no longer be able to function properly, and the patient may fall into a coma and die. Malaria can be treated with drugs. However, treatment is complicated by a number of factors. First, each type of malaria requires a different drug. Second, the treatment depends on the region of the world in which the person was infected. The kinds of parasites living in different parts of the world respond in different ways to different drugs. The classic treatment for malaria is quinine. Quinine is still effective in treating some forms of malaria in some parts of the world, but other parasites have developed a resistance to quinine. If quinine is not effective, a variety of antibiotics can be tried. These include tetracycline (pronounced tet -ruh-SIE-kleen), clindamycin (pronounced klin-duh-MY-suhn, trade name Cleocin), mefloquine (pronounced MEF-luhkwine, trade name Lariam), or sulfadoxine/pyrimethamine (pronounced sullfuh-DOK-seen/pi-ruh-METH-uh-meen, trade name Fansidar). A modified form of quinine known as chloroquine (pronounced KLOR-uh-kween) can also be used. In some parts of the world, the parasite that causes the most serious form of malaria is resistant to all known drugs. Patients with very serious cases of malaria may require hospitalization and special treatments. These treatments may include intravenous fluids (fluids injected into the patient's bloodstream), blood transfusions, kidney dialysis, and oxygen therapy to help him or her breathe. Alternative Treatment
The Chinese herb qinghao (known as artemesia in the West) has long been used to treat malaria. However, it is not approved for use in the United States and other parts of the developed world. Researchers are still concerned about the herb's possibly dangerous side effects. Some practitioners suggest using certain herbs to protect against malaria and to strengthen the liver. These herbs include wormwood, goldenseal, Chinese goldenthread, and milk thistle. Malaria can be prevented in one of two ways. First, a person can avoid being bitten by a mosquito carrying the malaria parasite. The World Health Organization (WHO) has been working to eliminate malaria for more than thirty years. Its approach has been to kill as many of the mosquitoes that cause malaria as possible. For some years, WHO was quite successful in this effort. It used DDT and other pesticides to kill mosquitoes. Unfortunately, mosquitoes have slowly become resistant to many pesticides. It has become more and more difficult to kill mosquitoes with the pesticides now available. The second method for avoiding malaria is to take drugs that protect against the disease. These drugs kill parasites as soon as they enter the bloodstream. The problem is that antimalarial drugs are expensive. Most people in Africa, Asia, and other areas where malaria is common cannot afford them. Scientists have long hoped to find a vaccine for malaria. With a vaccine, a person could be protected for a lifetime with one or a few shots. So far, however, researchers have had no success in producing such a vaccine. People who travel in areas where malaria is common can protect themselves by wearing mosquito repellent. The compound known as DEET is one of the most effective repellents, but it can have harmful side effects, especially in children. It should be used only with caution. Certain other preventive measures can also be followed, including: Staying indoors in well-screened areas between dusk and dawn Sleeping inside mosquito nets that have been soaked with mosquito repellent Wearing clothes that cover the entire body People who plan trips to areas in which malaria is endemic should take antimalarial drugs as a preventive against contracting the disease. The drugs usually prescribed are chloroquine or mefloquine. A person starts taking the drugs a few days before leaving on the trip. He or she continues to take the drugs while on the trip and for at least four weeks after they return home. Read more: Prevention - Malaria - body, effects, children, disease, people, drugs, health http://www.faqs.org/health/Sick-V3/Malaria-Prevention.html#ixzz124eoCH6m

Key Points when planting Please note this is a guide • Pick the correct place for your only as plants differ in re- quirements from species • Dig an appropriate hole to species. • Stake plant if required Please ask staff if addi- • Water in well Planting tion help is required. • Fertilize • Water often and deep until es- tablished