Bioreactivity of titanium implant alloys
Susan J. KerberMaterial Interface, Incorporated, Sussex, Wisconsin 53089-2244 ͑Received 30 September 1994; accepted 3 June 1995͒ A study was conducted regarding the adsorption of peptides on commercially pure ͑cp͒ Tiand Ti-6Al-4V. The peptides used were arginine-glycine-aspartic acid-alanine ͑RGDA͒,arginine-glycine-aspartic acid-serine ͑RGDS͒, and arginine-phenylalanine-aspartic acid-serine ͑RFDS͒. The tripeptide RGD is known to be important for biologically specific adhesion reactions.
This research was conducted to investigate the reason for a tendency toward thrombus formationwith Ti-6Al-4V that is not observed with cp Ti. After argon plasma cleaning, coupons of the titaniumalloys were inserted into solutions with variable concentrations ͑0.0625–2 mg/ml͒ of an individualpeptide group under constant temperature and time conditions. The samples were rinsed, dried, andanalyzed with x-ray photoelectron spectroscopy ͑XPS͒. Adsorption isotherms were obtained byplotting the relative amount of peptide adhesion as a function of solution concentration. It waspostulated through the XPS and adsorption isotherm data that the major adhesion mechanism for thepeptides to the titanium alloys was hydrogen bonding. CP titanium and Ti-6Al-4V are hypothesizedto react differently as implants because Ti-6Al-4V has a more electropositive surface, which allowsfewer hydrogen bonds to form. Hydrophilic reactions were proposed to be of secondary importanceduring bioadhesion, influencing the structure of the second layer adsorbed. There was no correlationfound between the net charge of the peptide groups and their adhesion to the alloys.
I. INTRODUCTION
adhesion. Although it will not have specific binding to im- When a material is implanted into living tissue, proteins plant surfaces in the same fashion as it does to other biomol- immediately adsorb onto the surface of the foreign object.
ecules, this peptide series is well characterized and is known Any subsequent reaction between the material and the host is to be important at implant sites. Adsorption isotherms of a function of these adsorbed proteins and surrounding tissue.
RGD-related peptides on titanium alloys were obtained.
An understanding of the interaction between materials used The mechanism of bioadhesion to titanium and its alloys for implants and proteins may help to increase the success of may be due to hydrogen bonding, hydrophilic interactions, implants. The most common titanium alloy is Ti-6Al-4V and/or charge transfer. To study these parameters, the substi- ͑titanium–6 wt % aluminum–4 wt % vanadium͒, and at this tuted RGD-based peptides had different amino acid side time it is the only titanium alloy used in load-bearing im- chains and different total charges. The four amino acids of plants such as hips and knees because it offers the best com- arginine-glycine-aspartic acid-serine ͑RGDS͒ have charges bination of strength, ductility, and freedom from environ- of ϩ, 0, ϩ, Ϫ for a net charge of ϩ1. In RFDS, the second mental effects such as stress corrosion cracking. Heart position amino acid glycine ͑with a –H side group͒ is re- valves, however, are usually made of unalloyed titanium placed by phenylalanine, an aromatic-containing amino acid.
͑also called cp titanium, for ‘‘commercially pure’’͒ because The charges on the RFDS amino acids are ϩ, Ϫ, ϩ, Ϫ. In of a reported tendency toward thrombus formation1 with Ti- the tetrapeptide RGDA, the final serine ͑with an –OH side 6Al-4V. A study by Johansson et al.2 determined a more group͒ is replaced by alanine ͑with a –CH3 group͒. The natural-like tissue reaction occurred with cp titanium than charges on the RGDA amino acids are ϩ,0,ϩ,ϩ. These three with Ti-6Al-4V. It is theorized that the clotting in the region relatively differently charged peptide groups were adsorbed of the Ti-6Al-4V structures is associated with the aluminum onto the two titanium alloy surfaces. Additionally, because of in the alloy. The differences in which cp titanium and Ti- the difference in the side chains, RFDS is more hydrophobic 6Al-4V interact with known, well characterized peptide sys- than RGDA and RGDS, and RGDS and RFDS should form more hydrogen bonds than RGDA. The relative amount of Both fibronectin and fibrinogen are proteins that exist in peptide adsorbed will be determined with x-ray photoelec- high concentration in animals. Fibronectin is a large protein tron spectroscopy ͑XPS͒. A review of the use of XPS to that can mediate adhesion and spreading of cells on an ex- study protein adhesion was completed by Paynter and tracellular matrix. Fibrinogen is essential to blood clotting.
To perform these adhesive functions, both proteins are re-quired to interact with other proteins, primarily receptors. A II. EXPERIMENT
chain of amino acids with a specific electronic configuration Samples of commercially pure titanium ͑cp Ti, grade 2͒ acts as a receptor area to accomplish this interaction. Both were obtained from Titanium Industries ͑Fairfield, NJ͒ and of fibronectin and fibrinogen have the same specific sequence Ti-6Al-4V from Intermedics Orthopedics, Inc. ͑Austin, TX͒.
of amino acids ͑arginine-glycine-aspartic acid, abbreviated The surfaces were mechanically polished to a bright finish by RGD͒ that act as this specific cell receptor and mediate cell Efco Finishing Corporation ͑Butler, WI͒, utilizing No. SS-35 J. Vac. Sci. Technol. A 13(5), Sep/Oct 1995
0734-2101/95/13(5)/2619/5/$6.00
1995 American Vacuum Society 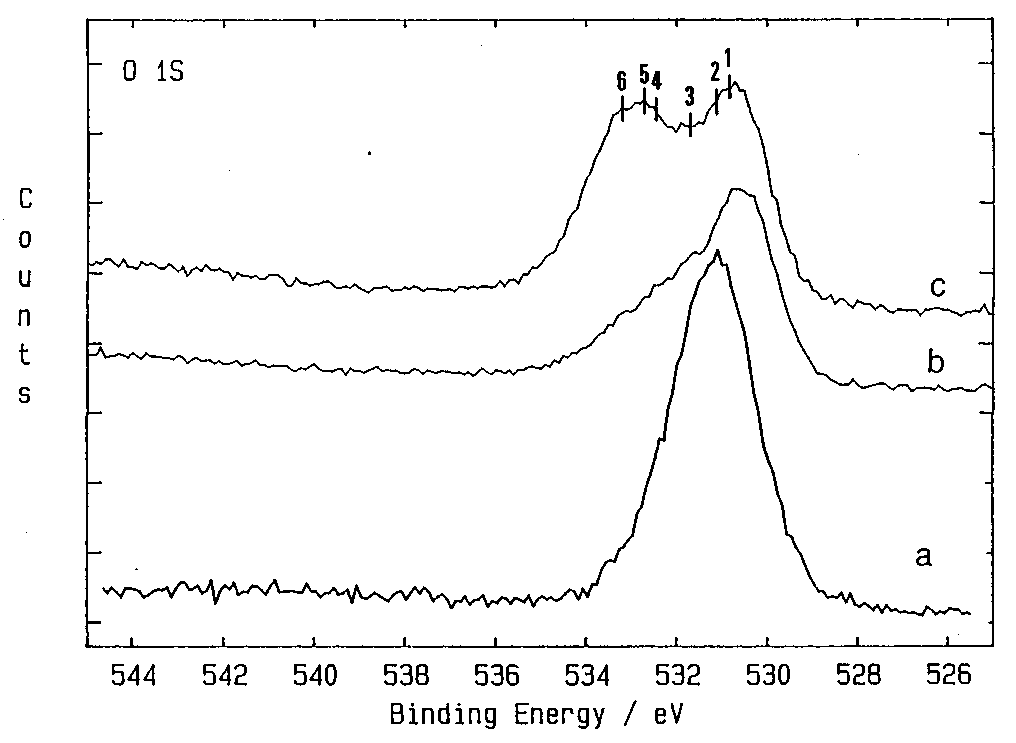 Susan J. Kerber: Bioreactivity of Ti implant alloys
stainless steel compound ͑alumina in an organic binder͒ fromKocour Co. ͑Chicago, IL͒. The samples were cleaned with asolvent method consisting of 5 minutes each in ultrasonicisopropanol and acetone. The test coupons were subse-quently argon plasma etched. Cleaning of implants by thismethod has been shown to yield clean surfaces that have abeneficial reaction with neighboring tissue.4–7 The sputteringsystem used for plasma etching was a Materials ResearchCorporation model 822 Sputtersphere with an argon radiofrequency ͑rf͒ plasma operated at 13.56 MHz. The 8 in. di-ameter pallet voltage was 1350 V. The etching process wasdone for 15 minutes. The samples were allowed to cool inargon before exposure to the atmosphere. The cleanliness ofthe samples was verified with XPS. The analysis system usedwas a VG ESCALAB system operating with an Al K␣ an-ode. Survey spectra were collected with a pass energy of 50eV; high resolution spectra with a pass energy of 20 eV.
FIG. 1. XPS high resolution O 1s spectra from ͑a͒ RGDS powder, ͑b͒Ti-6Al-4V exposed to distilled water, and ͑c͒ 2 mg/ml RGDS adsorbed from The cp titanium and Ti-6Al-4V samples were cut into 15 aqueous solution on Ti-6Al-4V. The centroids of deconvoluted peaks are mmϫ7 mm coupons. One coupon of each alloy was inserted noted with vertical dashes. Peaks are assigned as No. 1 TiO ͑ vertically ͑back, unpolished sides touching͒ into new, 532.0͒, No. 4 TiO2 nH2O and C–OH cleaned 9 mm test tubes. Solutions of RGDA, RGDS, and ͑532.5͒, No. 5 speculated to be oxygen* in Ti–O*–H–peptide, and No. 6speculated to be oxygen* in C–O*–H–O–Ti.
RFDS obtained from Bachem, Inc. ͑Torrance, CA͒ weremade with double distilled, deionized water ͑resistance Ͼ10M⍀) by successive dilution. The nominal peptide concentra- surface. Nitrogen on both the RGDS powder and on the tions were 2, 1, 0.5, 0.25, 0.125, 0.0625, and 0.00 mg/ml͑ peptide-exposed titanium samples occurred at 400.9 eV.
distilled water control͒. These nominal weights were cor- The C 1s peak of the RGDS powder ͑not shown͒ readily rected for the percentage of the peptide in the vial as given demonstrated the expected carbonyl and COH groups as well by Bachem: RGDA 76.3%, RGDS 90.9%, and RFDS 93.7%.
All of these weights are Ϯ3.0%. The titanium alloys were xHy and CmNn backbone. On the peptide-exposed titanium samples, the primary carbon peak coincided with exposed to the solutions for 26 hours at 25.0Ϯ0.5 °C using a that of adventitious carbon, except for minor high energy temperature controlled water bath. Each concentration ex- broadening. At higher peptide concentrations, there was in- periment for each peptide was replicated fifteen times. After creasing carbon with an increase in solution concentration, the exposure was completed, the solution was decanted and but the carbon background present on the control samples the samples were rinsed twice with double distilled, deion- was too large to allow the detection of peptide carbon at ized water and allowed to air dry. The samples were analyzed with XPS. The XPS spectra were quantified by the As with carbon, oxygen was not a good quantitative indi- ESCALAB system using the sensitivity factors of Wagner cator of peptide at the surface because it is also present not et al.8 The surface concentration of carbon, nitrogen, oxygen, only in the peptide, but also to a large degree on the surface and titanium was tabulated. The nitrogen signal from XPS is of distilled-water exposed titanium. The oxygen spectrum used by Ratner3 as a quantitative measure of the amount of from the RGDS powder is shown in Figure 1͑a͒. The primary protein present on a surface. Adsorption isotherms were ob- peak occurs at 531.2 eV, coinciding with CvO; high energy tained by plotting the sensitivity factor-corrected nitrogen͑ tailing is also found, due apparently to C–OH oxygen at 400.9 eV͒/titanium ͑458.5 eV͒ ratio as a function of solution 532.5 eV. High resolution oxygen spectra of the as-cleaned concentration. The ratios were additionally corrected to ac- titanium and distilled water-exposed titanium were very count for the different theoretical amounts of nitrogen in the similar and are illustrated in Figure 1͑b͒; the results are con- peptide. The amount of peptide on the surface cannot be precisely quantified due to uncertainties in sensitivity factors 530.7 eV and rutile titanium dioxide occurs at 530.6 eV.9 and attenuation lengths in these systems. Throughout this There was high energy broadening ͓Figure 1͑b͔͒. High reso- study, the data are used on a comparison basis. Additionally, lution XPS of the oxygen peaks for the samples exposed to a powder sample of RGDS peptide was analyzed by embed- peptide solutions yielded additional information about the ding the material in indium foil and immediately inserting adsorption processes. A series of peaks ͓Figure 1͑c͔͒ ranging from 531.5 to 533.5 eV increased ͑relative to the main oxy-gen peak at 530.7 eV͒ with increasing peptide solution con-centration. The spectra depicted in Figure 1 are typical of III. RESULTS
both alloys and all three peptides analyzed.
XPS analysis of the cleaned samples indicated the two As expected, no aluminum was detected on the surface of alloys have a relatively similar surface composition. A small cp titanium; only a small Al 2p peak at 75.2 eV was visible amount of nitrogen detected on the surface of the control on the Ti-6Al-4V. This peak is due to the native oxide from samples occurred at 397.4 eV. This correlated to nitride at the aluminum.8 No vanadium was detected. The low aluminum J. Vac. Sci. Technol. A, Vol. 13, No. 5, Sep/Oct 1995 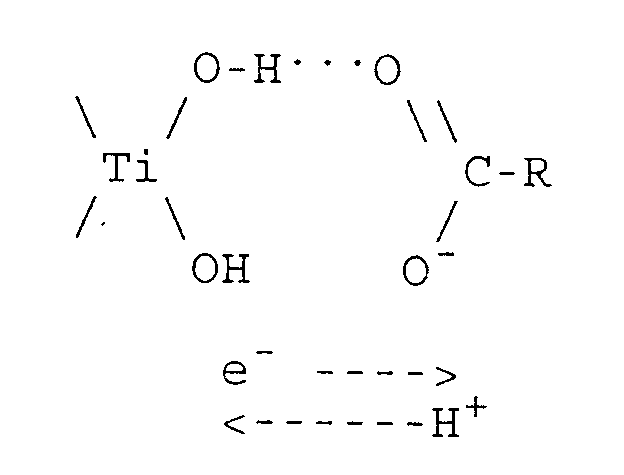 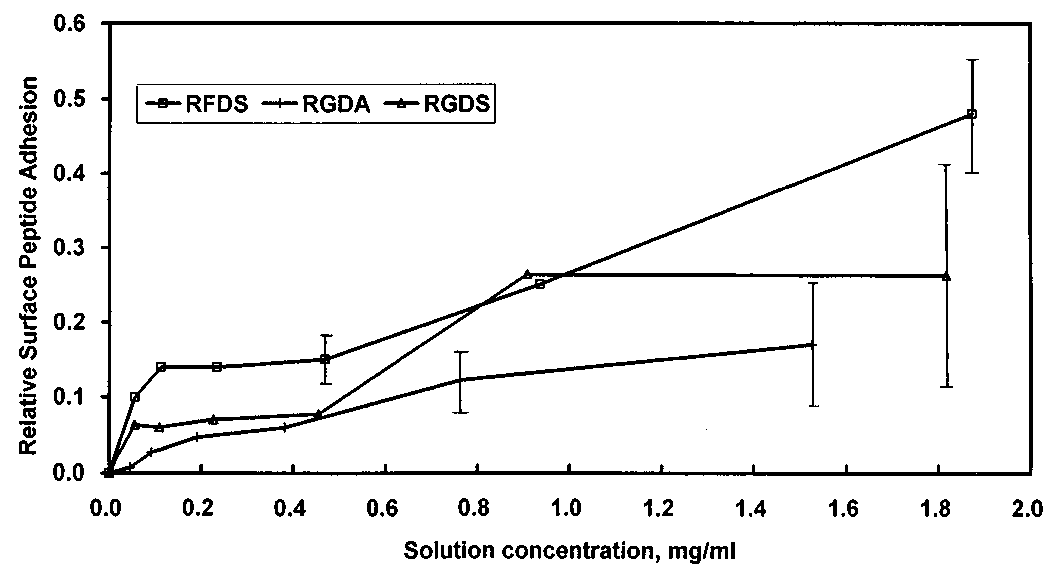 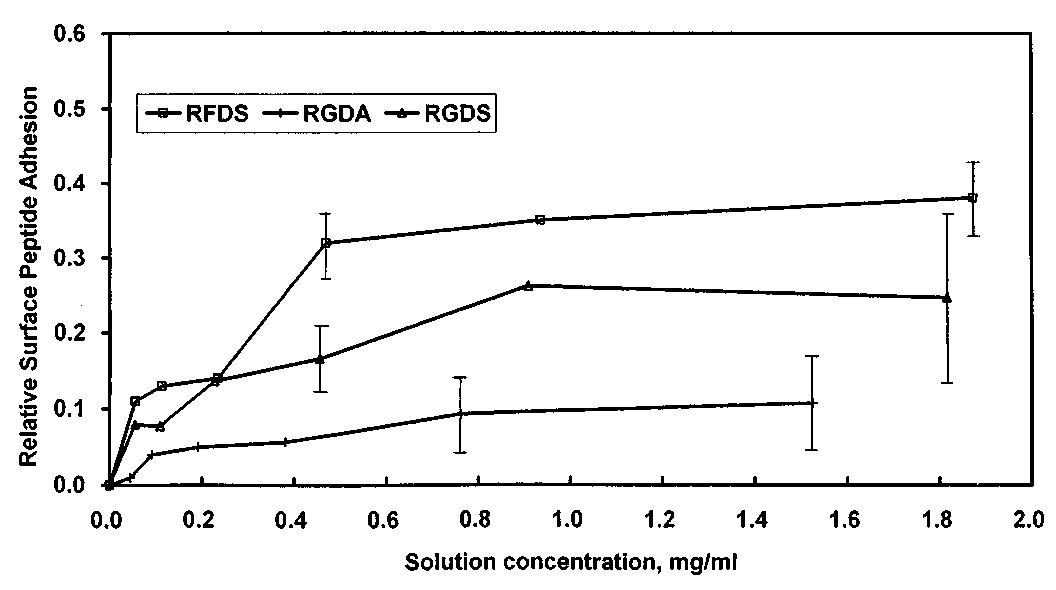 Does Mental Illness Exist? By Dr. Edward Watke Jr. I. Mental Illness -- Becomes a New Theory A . Historical aspects 1 . Historically, illness was referred to as a bodily disorder. 2 . Altered bodily structure constituted illness. B. A new criterion for determining illness came on the scene. When man began to label illness on the basis of observing behavior a new criterion was