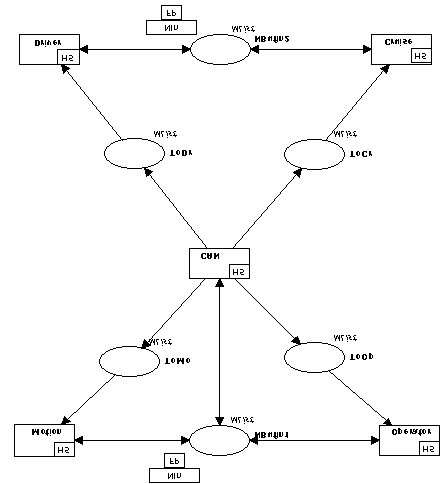 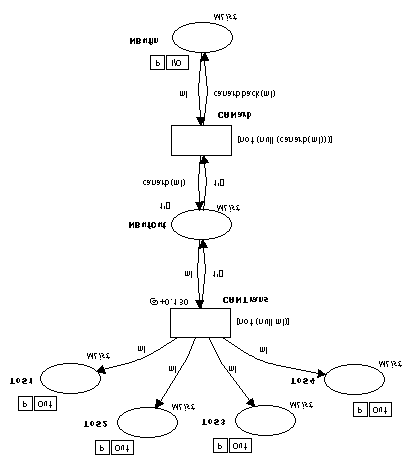 details. The substitution operation is accomplished by a Fig. 7 shows the Cruise subsystem subnet. It includes the binding between sockets in the super page and control machine, the Cruise actor and the input/output corresponding ports in the subpage. Fig. 6 depicts a CAN subnet. NBufIn is a port-place linked to all the outputsocket-places in the various subsystems. It is used to The list of the expected external messages is carried by the broadcast a network message. The token-message list in token in the ExpMsgs place. A CAN message is actually NBufIn contains, at any moment, the set of sent messages received by the transition FromCAN which translates and ranked by priority, waiting to be transmitted by CAN.
appends it to the local generated message list (place Transition CANarb models the arbitration process. The CMPIn). An output network message is transmitted by highest priority message is actually selected by CANarb ToCAN transition which inserts it ranked into the message only when the network is idle. Transition CANTrans list of NBufIn place of the CAN net (NBufIn and ToNetP models the message broadcast and its transmission delay.
are mirroring places). The scheduler subnet applies thetime clauses of the Cruise subsystem according to Fig. 4.
The controller subnet implements message selection anddispatching operations of the control machine. Selection isbased on the EDF strategy. The Cruise actor subnet isshown in Fig. 8. The model embodies theState/Event/Action diagram of Fig. 3. It generates CANmessages through the CAToNet place which mirrorsToNetP1 output place of Fig. 7. The time-consumingactivity (action) is implemented by transition CruiseActwhich is in charge of accepting an incoming message andprocessing it by suitable arc inscriptions (ML functions)which update the actor internal status and attributes.
Design/CPN allows both informal and formal analysismethods to be applied to an achieved system model.
Informal analysis can be based on model simulation(specifications testing (Ghezzi et al., 1991)), i.e., byproviding an initial marking and then by tracing one ormore possible resulting behaviours. By observing thesebehaviours the analyst can realise whether or not thespecified system meets functional or temporalrequirements.
Figure 5: Top level CPN model for the Cruise system.
Formal analysis consists in defining general properties ofthe net model which reflect special types of desirable (orundesirable) behaviours of the specified system, and thenusing the specification to formally prove (or disprove) suchproperties. For this purpose the occurrence graph (OG)method (Jensen, 1994) can be used. An OG is a directedgraph which has a node for each reachable marking and anarc for each occurring binding element. An arc links thenode of the marking in which the associated bindingelement occurs to the node of the marking resulting fromthe occurrence. All standard properties like absence ofdead markings, reachability and boundedness analysis .
can be checked on the OG. It is worthy of note that the OGmay become very large, even for relatively small nets, thatit cannot possibly be generated even with the mostpowerful computer. Another limitation is dependency fromthe initial marking: each possible initial marking mayoriginate a different occurrence graph.
Functional analysis of the Cruise system was conducted byusing a simple mathematical model for the motion model(Luqi, 1995) and by tracing the causally connectedmessages of every thread at the Design/CPN graphicaluser-interface, e.g., by a step-by-step simulation.
From the temporal point of view Design/CPN doesn’tprovide specific analysis techniques. However, the generalsupport for functional analysis together with a primitive time notion, ensured by a global clock, can be used to 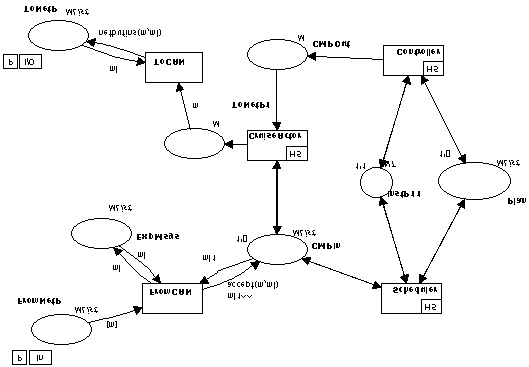 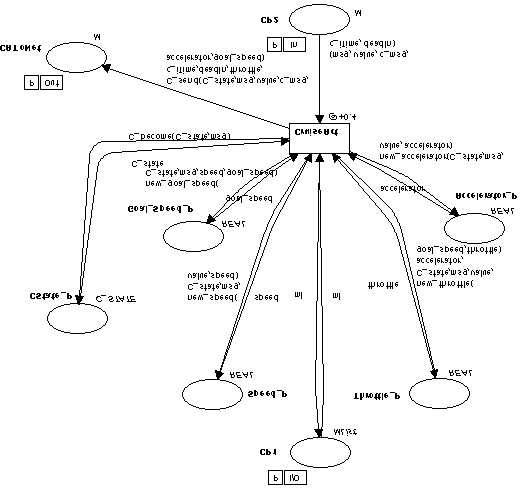 PHI 1110B Introduction to Philosophy Professor “Philosophy begins with wonder,” so said Aristotle more than two thousand years ago. Hence this course aims at an introduction to the basic problems and methods of philosophy. The fundamental and existential questions facing every one of us, like the problem of death; the meaning and purpose of life, the question of knowledge, reality and

LIST COMPILED PURSUANT TO SECTION 1086 OF THE TAXES CONSOLIDATION ACT, 1997, IN RESPECT OF THE PERIOD BEGINNING ON 1 October 2012 AND ENDING ON 31 December 2012, OF EVERY PERSON – in whose case the Revenue Commissioners accepted a settlement of the kind mentioned in Section 1086. The list also includes cases in which a Penalty Determination was made by the Courts in respect of the same period.