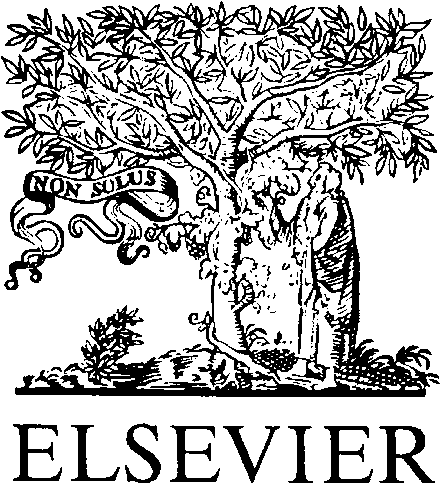 Women’s Health Issues 13 (2003) 74 –78 MIND CONTROL OF MENOPAUSE
Jawaid Younus, MDa, Ian Simpson, MDb, Alison Collins, RNb, Xikui Wang, PhDc aLondon Regional Cancer Centre, London, Ontario, Canada bWestern Memorial Regional Hospital, Corner Brook, Canada cDepartment of Statistics, University of Manitoba, Winnipeg, Canada Received 29 July 2002; accepted 14 November 2002 The primary objective of this study was to observe the effect of hypnosis on hot flashes (HF)
and overall quality of life in symptomatic patients. A secondary objective was to observe the
effect of hypnosis on fatigue. Ten healthy volunteers and four breast cancer patients (total 14
patients) with symptoms of HF were treated with four, 1 h/wk sessions of hypnosis. The same
physician, with the help of a nurse, conducted every session. All subjects recorded frequency,
duration, and severity of HF in a HF diary. The QLQ-C30 and Brief Fatigue Inventory forms
were used to assess the impact on quality of life and fatigue, respectively. The statistical
evaluations were performed, including analysis of variance and nonparametric procedures.
The frequency (p Ͻ 0.0001), duration (p Ͻ 0.0001), and severity (p Ͻ 0.0001) of HF were
significantly reduced. The overall quality of life was also improved (p ϭ 0.05). The subjects
enjoyed better sleep and had less insomnia (p ϭ 0.012). There was a significant improvement
on current fatigue level (p ϭ 0.017), but we did not find a statistically significant reduction in
the total fatigue level. We conclude that hypnosis appears to be a feasible and promising
intervention for HF, with a potential to improve quality of life and insomnia. Although
improvement in current level of fatigue was observed in this pilot study, total fatigue
improvement did not reach statistical significance.
Keywords: Menopause, Hormonal replacement therapy, Hypnosis, Hot flash
Thehotflash(HF)isdescribedasaheatorwarmth to improve HF. This pilot study was performed to
sensation of the skin, often accompanied by other evaluate the role of hypnosis to improve HF symp- symptoms, such as sweating.1 The majority of both toms and to observe its impact on quality of life and postmenopausal and perimenopausal women report HF symptoms. Hormonal replacement therapy andvarious other pharmacologic interventions have lim-ited success and are not without side effects. Such treatments include clonidine, methyldopa, vitamin E, The Institutional Review Board of Western Memorial megesterol acetate, and antidepressants such as ven- Regional Hospital approved this study. Ten healthy lafaxine. Nonpharmacologic approaches, such as be- volunteers and four breast cancer patients were re- havioral therapy, are viewed as helpful and generally cruited at the Corner Brook Cancer Center, from without side effects and thus appear attractive to both August 2000 to April 2001. The participants were considered eligible if they had history of HF for at Hypnosis has been used successfully to improve least 1 month with a frequency of 5 or more episodes/ symptoms in a variety of clinical disorders. To date, week. Patients with breast cancer were eligible, pro- there is no report in the literature of using hypnosis vided they had completed their cancer therapy 3months before their enrollment for this trial. Patientswith metastatic breast cancer were not considered * Correspondence to: Dr. Jawaid Younus, London Regional Can- eligible. Patients were excluded upon their refusal or if cer Centre, 790 Commissioners Road East, London, Ontario N6A4L6, Canada.
any physical condition or cognitive impairment pre- vented them from completing the questionnaire and Copyright 2003 by the Jacobs Institute of Women’s Health. 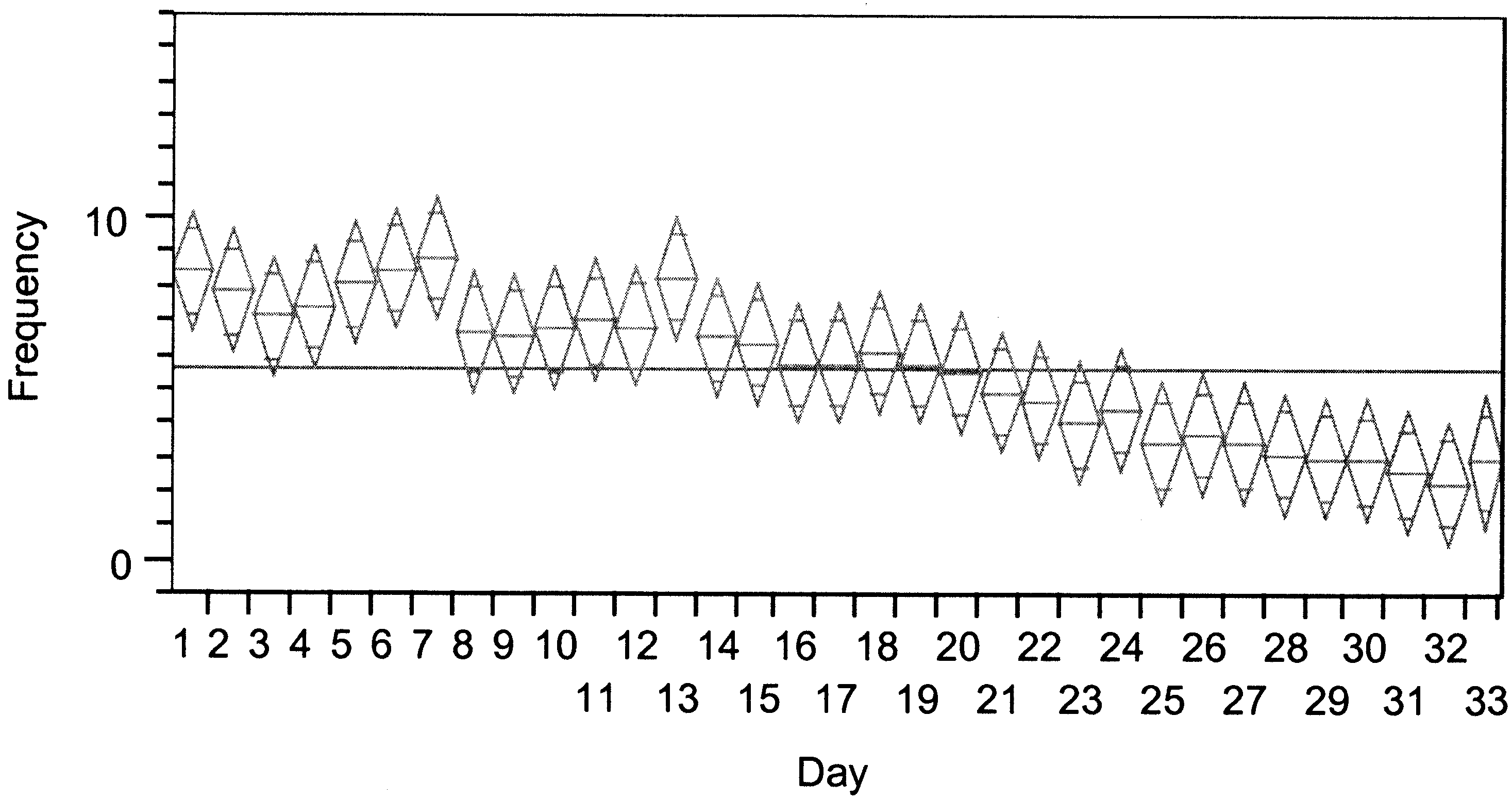 J. Younus et al. / Women’s Health Issues 13 (2003) 74 –78 Figure 1. One-way ANOVA for frequency. The upper and lower tips for each diamond indicate the 95% confidence interval for the mean on
each day. The upper and lower horizontal segments within each diamond are the 95% overlap marks. When the sample sizs are equal (which
is the case on most days), two means are significantly different if their overlap marks do not overlap. The horizontal line inside the rectangle
is the overall sample mean.
HF diary. An informed consent was obtained before all quality of life. The secondary end point was the the registration for each participant. To maintain con- fatigue level. Analysis of variance (ANOVA) and two fidentiality, their provincial medical numbers identi- nonparametric procedures—the Kruskal-Wallis test fied participants. All data were pooled for analysis.
(KW) and the median test (MT)—were performed on No concurrent therapy with chemotherapy, radiation SAS and JMP IN (a product from SAS). Regression therapy, or any known therapies for HF was allowed.
analysis was used to quantify the improvement in Patients on tamoxifen were allowed to continue using frequency of HF and in other variables.
All participants completed four weekly group hyp- nosis sessions. Each group had 4 –5 participants. After an introduction to hypnosis and an explanation ofmind/body interaction, participants underwent a gen- The frequency (p Ͻ 0.0001 for all tests), duration (p Ͻ tle relaxation phase that led to light-trance hypnosis.
0.0001 for all tests), and severity (p Ͻ 0.0001 for all Additionally, in the last two sessions, specific sugges- tests) of HF were significantly reduced with hypnosis.
tions were given to reduce and block HF symptoms.
Figure 1 shows one-way ANOVA results for reduction The same physician with the help of a registered nurse in HF frequency during the treatment period. Because conducted all the sessions. The quality of life, insom- both duration and severity are ordinal with categorical nia, and overall health evaluations were based on the values, we introduced combined duration and com- QLQ-C30 questionnaire,2 which is well described and bined severity as the weighted average of various widely used. We used the Brief Fatigue Inventory levels. Figures 2 and 3 illustrate the improvement in (BFI) form to calculate present and total level of the combined severity and combined duration of HF fatigue.3 The total fatigue level was derived as a over the treatment period, respectively. Interestingly, composite score from six different questions, which all three figures show the beginning of improvement asked the participants about their activity, mood, around Day 14. Sensitivity analysis was performed to walking ability, work, relationship with people, and examine the effect of the weights on the results, and it enjoyment of life. The trial participants filled out the was found that statistical results were robust as long QLQ-C30 and BFI form before the commencement of as the weights were monotonic (with higher values for hypnosis sessions, after the second and fourth ses- higher levels of duration or severity). Regression anal- sions, and finally at the 1-month follow-up visit. All ysis showed that on average, there was a 0.2 reduction participants kept a record of frequency, duration, and per day seen in frequency (p Ͻ 0.0001), a 0.38 reduc- severity of their HF in a daily diary, starting 1 week tion per day in the combined duration (p Ͻ 0.0001), before first session and continued throughout the and 0.47 reduction per day observed in the combined The primary end points for this study were the There was a significant improvement on overall frequency, duration, and severity of HF and the over- quality of life for the first 3 weeks (p ϭ 0.0143 for 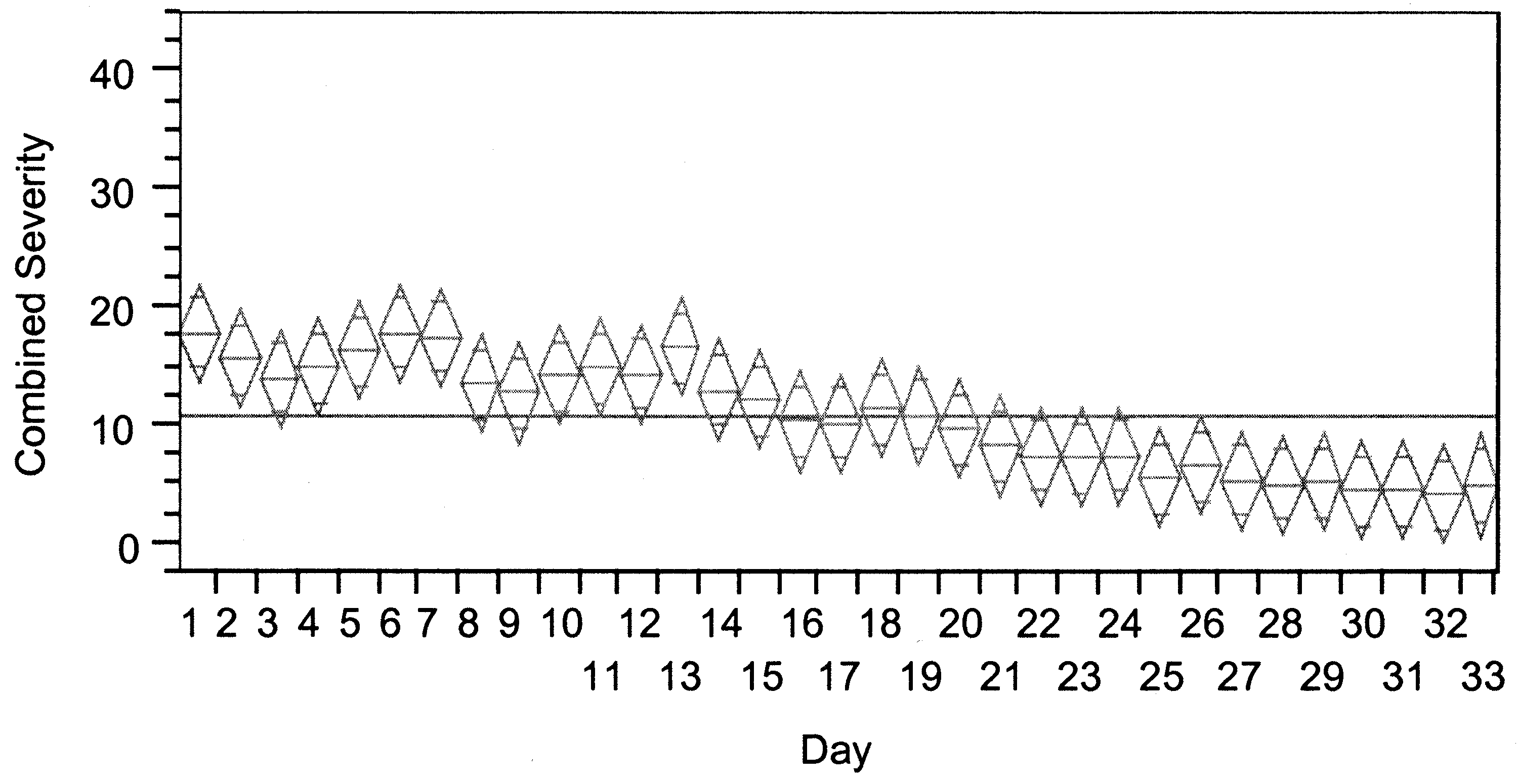 Don’t Let the Flu Get You Down It’s no secret that the 2009/2010 flu season will be challenging. Between the H1N1 Virus (“Swine Flu”) the seasonal flu, and a myriad of cold viruses, staying healthy certainly won’t be easy this winter. In fact, to help prepare for a potential outbreak of H1N1 Flu virus, the Massachusetts Department of Public Health is working to distribute a flu