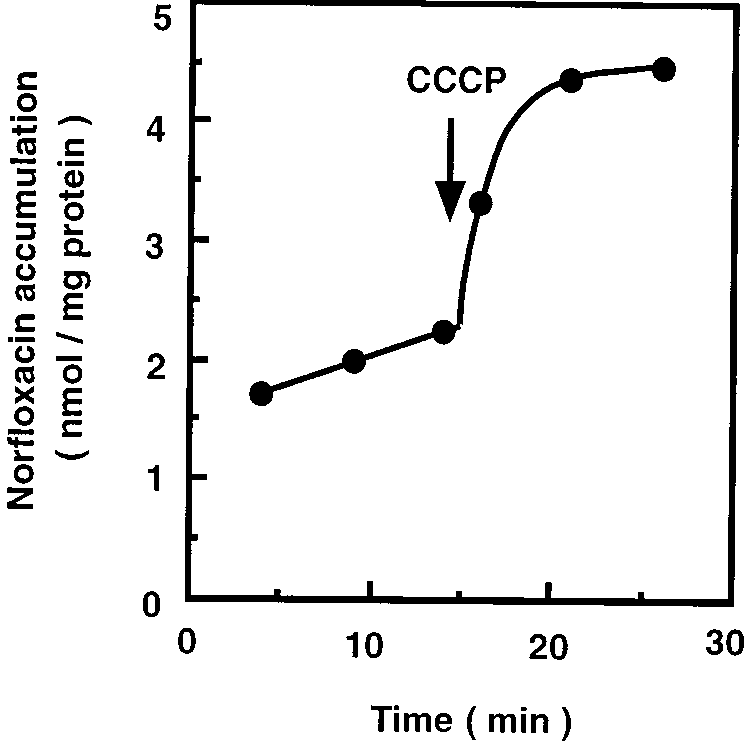 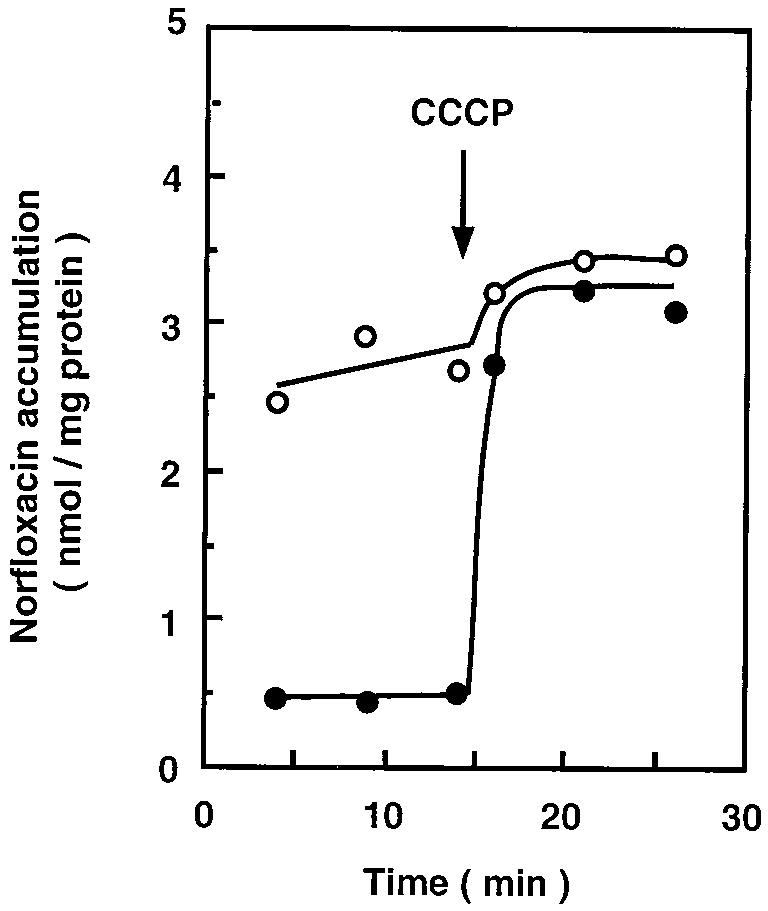 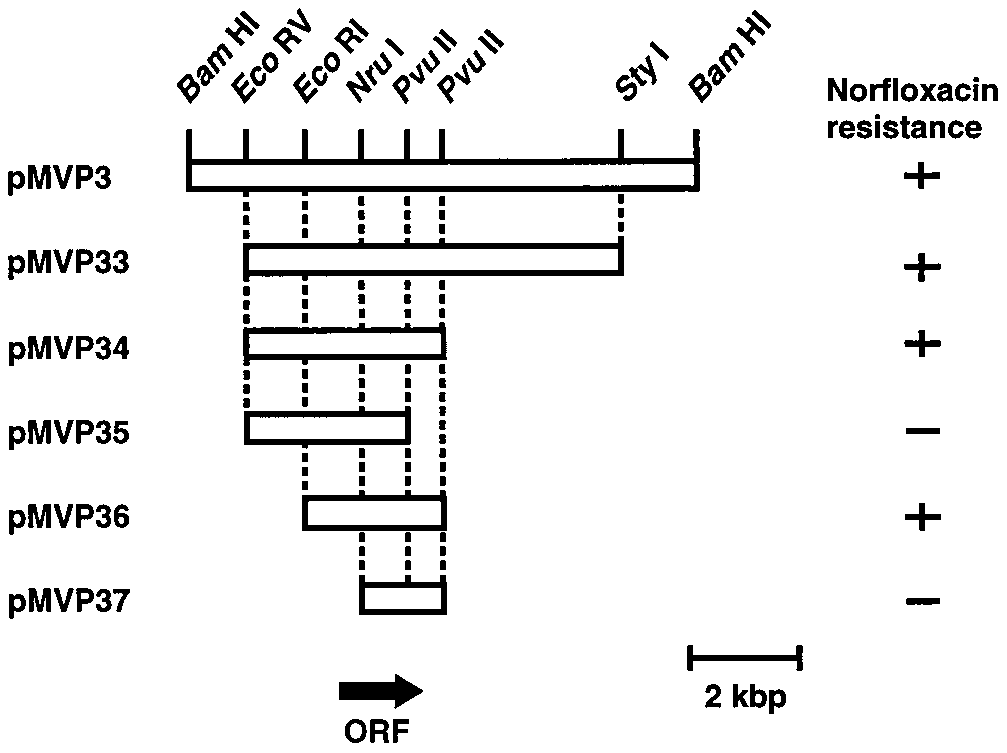 FIG. 3. Restriction maps of pMVP3 and its deletion derivatives. DNA re- gions derived from V. parahaemolyticus chromosomal DNA and carried by each plasmid are shown. Growth of E. coli KAM3 cells harboring each plasmid on an agar plate containing L broth, 0.05-␮g/ml norfloxacin, and 60-␮g/ml ampicillin is shown on the right. Plus signs indicate that cells grew, and minus signs indicate FIG. 2. Accumulation of norfloxacin in host and transformant cells. Cells of that cells did not grow. The arrow shows the position and direction of the norM E. coli KAM3 and KAM3/pMVP3 were grown in L medium supplemented with 40 mM potassium lactate. Norfloxacin was added to the cell suspensions at a final concentration of 100 ␮M. After 15 min, CCCP was added to the suspensions at a final concentration of 100 ␮M. Portions were removed at the times shown, and the concentration of norfloxacin extracted from the cells was determined with a fluorescence spectrophotometer. Symbols: E, KAM3; F, KAM3/pMVP3.
We checked whether the cloned DNA fragment is really from V. parahaemolyticus, and whether a similar gene is pres- ent in other bacteria, by Southern blot analysis. A DNA frag- ment derived from pMVP36 was used as a probe. We detected system in KAM3/pMVP3 is a drug/ion antiporter. However, it a dense hybridized band with chromosomal DNA of V. para- is not clear whether this system utilizes Hϩ as the counterion haemolyticus (data not shown). The position of the band was for the antiport. Many ion-coupled systems in membranes of exactly the same as that of the control (pMVP36). Thus, we vibrios utilize Naϩ instead of Hϩ (28). Although cells of believe that the DNA insert in pMVP36 is from the chromo- V. parahaemolyticus possess a primary respiratory Naϩ pump somal DNA of V. parahaemolyticus. We also detected a less (30), Naϩ-coupled membrane processes, such as Naϩ/solute dense band with chromosomal DNA of V. alginolyticus. Thus, symport, are sensitive to an Hϩ conductor (unpublished re- it seems that cells of V. alginolyticus possess a similar gene.
sults). Therefore, we cannot distinguish between an Hϩ-cou- Chromosomal DNAs from other bacteria tested, P. aeruginosa pled system and an Naϩ-coupled system from the effects of an Hϩ conductor. We tested the effect of Naϩ on the activity of norfloxacin extrusion in cells of both V. parahaemolyticus and E. coli transformed with pMVP3. However, no clear effect was TABLE 1. Susceptibilities of study strains to different compounds observed (data not shown). We also tried to detect norfloxacin/ Hϩ antiport by the quinacrine fluorescence quenching method with everted membrane vesicles prepared from cells of KAM3/ pMVP3. However, we were unable to detect Hϩ efflux due to norfloxacin influx (data not shown).
Several plasmids carrying different portions of pMVP3 were constructed, and the ability to confer norfloxacin resistance on E. coli KAM3 was tested (Fig. 3). Among the plasmids that con- ferred norfloxacin resistance, plasmid pMVP36 possessed the shortest DNA insert derived from V. parahaemolyticus DNA We tested the susceptibility of cells of KAM3/pMVP36 to many drugs (Table 1). pMVP36 made KAM3 cells resistant to rather hydrophilic new quinolones, such as norfloxacin and ciprofloxacin, but not to hydrophobic quinolones, such as spa- floxacin and nalidixic acid. Cells harboring pMVP36 were also resistant to structurally different antimicrobial agents, such as ethidium and streptomycin (and kanamycin). Thus, it seems that pMVP36 carries a gene for multidrug resistance. Our re- sults are consistent with the idea that the gene encodes a pro- tein mediating the extrusion of norfloxacin and ethidium from cells. In fact, we observed elevated ethidium efflux in cells of KAM3/pMVP36 compared with cells of KAM3 (data not shown). 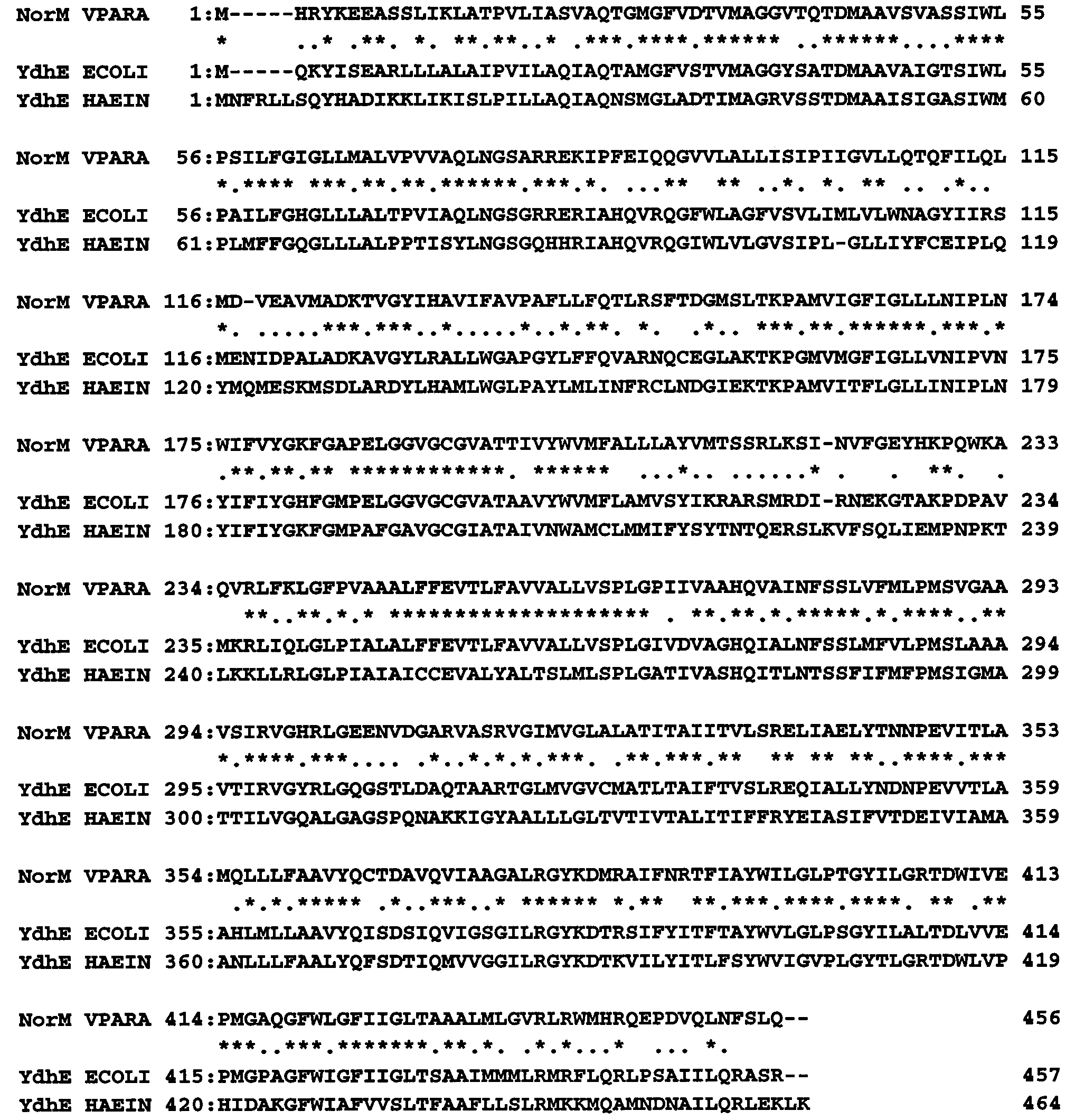