Ophthalmic Plastic and Reconstructive SurgeryVol. 17, No. 2, pp 123–1252001 The American Society of Ophthalmic Plastic and Reconstructive Surgery, Inc.
Destructive Eyelid Lesions in Sarcoidosis Muhammad Moin, F.R.C.Ophth.,*† Robert C. Kersten, M.D.,*‡ Francesco Bernardini, M.D.,*§ *Department of Ophthalmology, University of Cincinnati, Ohio; †Department of Ophthalmology, Mayo Hospital, Lahore, Pakistan; ‡Cincinnati Eye Institute, Cincinnati, Ohio; and §Department of Ophthalmology, University of Genoa, Italy Purpose: To report the clinical and histopathologic findings of a patient with sar-
coidosis causing bilateral destruction of the lower eyelids.
Methods: Case report.
Results: Bilateral destructive lower eyelid lesions and cicatricial entropion devel-
oped in a 43-year-old man with systemic sarcoidosis. Histopathology was consistentwith sarcoid granulomas. Disease progression was arrested with systemic prednisoneand methotrexate before eyelid reconstruction was performed.
Conclusions: Sarcoidosis very rarely can cause destruction of full-thickness eye-
lid architecture. Active inflammation should be controlled before reconstruction.
Sarcoidosis is a multisystem disorder of un- and neck. There were several 2- to 3-cm subcuta- known cause characterized by noncaseating inflam- neous nodules on his left upper arm and both legs.
matory granulomas. Ocular involvement occurs in A chest radiograph demonstrated hilar adenopathy 25% to 50% of persons affected with sarcoidosis.1,2 consistent with pulmonary sarcoidosis. The remain- Although skin may be involved in up to 22%3 of der of the physical examination and medical history cases, eyelid skin involvement is very rare. There was noncontributory. Previous blood tests included have been only ten previously reported cases, an erythrocyte sedimentation rate of 15 mm and an elevated serum angiotensin-converting enzyme of To our knowledge, this is the first reported case of full-thickness destruction and necrosis involving The pertinent findings on ophthalmic examina- both lower eyelids resulting from sarcoidosis.
tion were marked conjunctival hyperemia, leftgreater than right, with an apparent inflammatory CASE REPORT
nodule (Fig. 1) arising from bulbar conjunctiva ad- A 43-year-old black man was examined in July jacent to the limbus in the left eye. There was bilat- 1998 with a 2.5-year history of intermittent red- eral extensive destruction of lower eyelid architec- ness, swelling, itching, and irritation of both eyes.
ture with indurated thickening, madarosis, and After a 5-year history of an unknown inflammatory obliteration of the eyelid margin (Fig. 2), and condition, he was diagnosed with sarcoidosis in marked forniceal foreshortening and symblepharon May 1998 after a biopsy of throat and nasal polyps.
formation. The lateral 60% of the right lower eyelid The patient also had erythematous maculopapular showed full-thickness inflammation and destruction lesions of the skin over the bridge of the nose, chin, of normal landmarks. Slit-lamp and fundus exami-nations showed no evidence of anterior or posteriorsegment inflammation.
Biopsies of the eyelid, conjunctiva, and facial skin nodules all revealed noncaseating granuloma- Address correspondence to Dr. Robert C. Kersten, University tous inflammation consistent with sarcoidosis. The of Cincinnati Medical Center, Barrett Center–0670, Suite 3008,234 Goodman Street, Cincinnati, OH 45219, U.S.A.
histopathology of the eyelid showed unremarkable 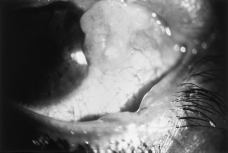 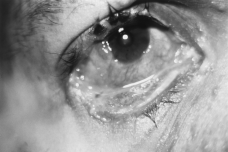 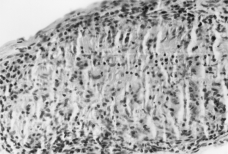 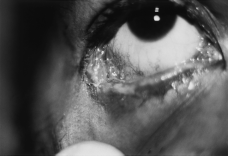 FIG. 1. Conjunctival granuloma of left eye and eyelid destruc-
FIG. 3. Postoperatively after reconstruction of right lower eyelid.
tion with notching apparent at initial examination.
epithelium with focal granulomas consisting of ep- the lateral 60% of the right lower eyelid was appar- ithelioid histiocytes, few multinucleated giant ent (Fig. 4), and the left lower eyelid had extensive cells, and a peripheral rim of lymphocytes and symblepharon formation and cicatricial entropion plasma cells in the subepithelial connective tissue (Fig. 3). Acid fast bacilli and fungal stains were Reconstruction of the left inferior fornix with a mucous membrane graft and repositioning of the Prednisone had been prescribed by the patient’s entropic left lower eyelid was performed. The right internist to control his systemic sarcoidosis coinci- lower eyelid was reconstructed with a free tarsal dent with his first visit to our office in July 1998.
graft from the left upper eyelid and transpositional He was lost to our follow-up for 6 months, during skin and muscle flap from the right upper eyelid for which time methotrexate had been added and the replacement of the anterior lamella (Fig. 5). This prednisone dosage had been reduced. Reevaluation resulted in a satisfactory outcome with resolution at that time revealed the destructive inflammatory of the trichiasis and restoration of eyelid architec- process involving the eyelids to have resolved dra- ture. At the last visit 2 months postoperatively, the matically; the ulcerated areas had reepithelialized patient still was taking methotrexate for his sys- and the indurated thickening of the eyelid margin temic sarcoidosis, and there was no recurrence of had softened. Full-thickness loss of the eyelid over Active conjunctival and eyelid inflammation with de- FIG. 4. High-power view demonstrated noncaseating granulo-
mas consistent with sarcoidosis (H & E).
Ophthalmic Plast Reconstr Surg, Vol. 17, No. 2, 2001 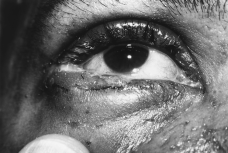