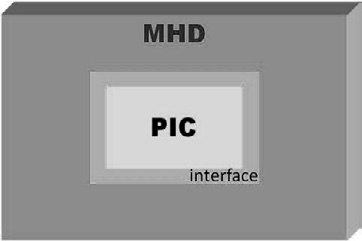 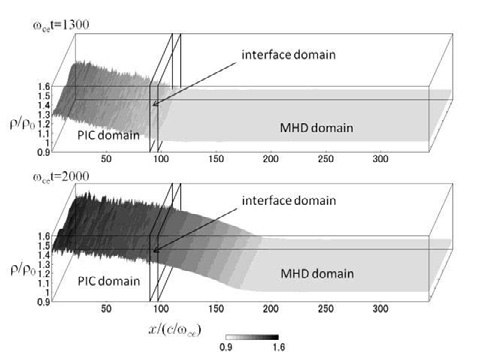 §5. Hierarchy-Interlocking Model in the Using this new model, we perform a multi-hierarchy simulation in which plasma flow satisfying a shifted Maxwellian velocity distribution propagates from PIC to MHD domains. Figure 1 shows the bird’s eye view of the Usami, S., Horiuchi, R., Ohtani, H., Den, M. (NICT) profiles of plasma mass density at Zcet=1300 and at Zcet=2000. The simulation domain is divided as follows. PIC domain: 0<x/(c/Zce)<88.0, interface domain: Collisionless magnetic reconnection is one of the 88.0<x/(c/Zce)<96.0, MHD domain: 96.0<x/(c/Zce)<344.0. fundamental processes in which magnetic field energy is We can see that plasmas are smoothly and continuously converted to kinetic and thermal energies. It plays an ejected from PIC to MHD domains via the interface domain.
essential role in the rapid energy release in laboratory fusion Now, we are constructing a two-dimensional device and astrophysical plasmas such as solar flare. Also hierarchy-interlocking model, in other words a magnetic reconnection has an aspect of typical complex hierarchy-interlocking model in the upstream and phenomenon controlled by multiple spatiotemporal scale downstream directions as shown in Fig. 2 and are examining physics. In order to clarify the complete picture of magnetic reconnection as a multi-hierarchy phenomenon, we have We furthermore consider that a particle domain with developed a multi-hierarchy simulation model which deals Coulomb collision effect is inserted between PIC and MHD with macroscopic and microscopic physics simultaneously In our multi-hierarchy model, we employ the domain decomposition method; the domains differ in algorithm.
Physics in the domain where some microscopic dissipation mechanisms are required is solved in the first principle by full particle-in-cell (PIC) algorithm. We call this domain PIC domain. On the other hand, dynamics outside the PIC domain is expressed by magnetohydrodynamics (MHD) algorithm, in which the ideal MHD equations are calculated as the basic equation, since electrical resistivity is assumed to be generated self-consistently by microscopic kinetic process only in the PIC domain. We refer to this domain as MHD domain. Between the PIC and MHD domains, an interface domain with a finite width is inserted in order to Fig. 1: Bird’s eye view of the spatial profile of plasma With the hierarchy-interlocking in the upstream direction, mass density at Zcet=1300 and at Zcet=2000. Plasmas we have performed the multi-hierarchy simulations of smoothly propagate from the PIC to MHD domains.
driven reconnection, namely plasma inflows come from the MHD domain and drive magnetic reconnection in the PIC domain [3,4]. It was confirmed that reconnection process found in the multi-hierarchy model is true physics. Aiming to apply our multi-hierarchy model to a larger region of the magnetic reconnection system, we develop the hierarchy-interlocking model in the downstream direction, in which the improved interlocking method is adopted. First, we consider the configuration that the upstream region (PIC domain) is located in the left side and the downstream region (MHD domain) is in the right side. As the Fig. 2: Schematic diagram of the two-dimensional hand-shaking scheme for physical quantities except for 1) S. Usami, H. Ohtani, R. Horiuchi, and M. Den, J. Plasma Fusion Res. 85 (2009) 585.
is used. On the other hand, for pressure 2) S. Usami, H. Ohtani, R. Horiuchi, and M. Den, Comm. in Comput. Phys. 12 (2012) 1006.
3) S. Usami, H. Ohtani, R. Horiuchi, and M. Den, Plasma Fusion Res. 4 (2009) 049.
where 'x can be regard as for instance one grid spacing. 4) S. Usami, H. Ohtani, R. Horiuchi, and M. Den, Phys. This improved method can suppress unphysical noises in the

Managing Your Arthritic Knee Mild to moderate arthritis of the knee can often be managed without surgery. Patients frequently ask “What can I do to minimize the pain and prolong the life ofmy knee?” Here are some suggestions that have stood the test of time and have Weight Loss For patients who are carrying extra weight, pain can often be managed withlosing a few extra kilos. Your k

adult and pedi order set and powerplans available in compass