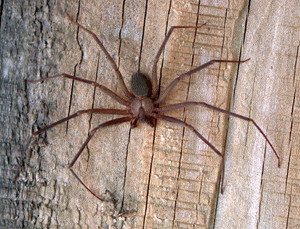 “The Brown Recluse Spider”
By Everett D. Cashatt,
Associate Curator of Zoology
From The Living Museum, 1971.
Until the 1950s the brown recluse
spider, Loxosceles reclusa, was
ignored or unknown to the general
public in the United States. As early as
1929, a Kansas physician, Dr. L.R.
Schmaus, published a case report in
the Journal of the American Medical
Association describing the bite of a
spider identified as Loxosceles. In
1947, a Puerto Rican scientist
described the bite of Loxoceles laeta, a South American relative of our brown recluse.
The occasional occurrence of a necrotic skin lesion prompted a study by Missouri
physicians and scientists at the University of Missouri in 1957. These studies revealed
that the bite of the brown recluse caused the large, slow-healing open sore referred to as
necrotic spiderbite, necrotic arachnoidism (=loxoscelism), or gangrenous spot mentioned
in medical literature as early as 1872. In recent years more information on the recluse
became available to the public because of research at universities and other institutions in
Missouri, Oklahoma, Illinois, Arkansas, and Georgia.
Spiderbites
Despite the large number of brown recluse spiders in some midwestern areas, the number
of confirmed cases of necrotic spiderbite is relatively small. Many people have lived in
houses infested with this species for years and have not been bitten by it because it is
extremely shy and non-aggressive. If a person is bitten, however, it is important that the
symptoms be recognized and that, if at all possible, the spider be saved for positive
identification.
Reactions to the bite may range from a mild skin irritation to a large slow-healing open
sore, depending on the intensity and duration of the bite. One may or may not feel the
actual bite. Generally, within one to eight hours after the bite, the site becomes swollen
and painful. After about twenty-four hours, the area around the bite turns purple. The
cells of the skin turn black as they die and start to slough away in the next few days. The
sloughing off of dead cells continues for several weeks, usually leaving an open pit-like
sore the size of a dime or larger and often exposing underlying muscles. As the wound
heals, it fills with scar tissue. Healing may take several months. Such severe local
reactions have occurred in a minority of documented cases. In strong reactions, there may
be a rash, fever, nausea, and abdominal cramps. In a few extreme cases there has been
destruction of many red blood cells, signaled by bloody or dark-colored urine.
Treatment
No antivenin is yet available in the United States, but medications are available to treat
them and to promote healing. (*Addendum: Some include antibiotics (oral and/or IV), 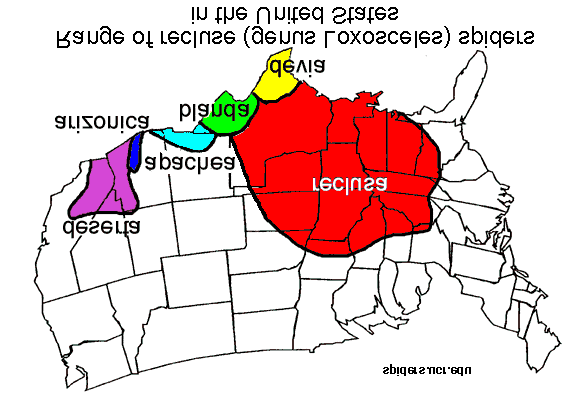 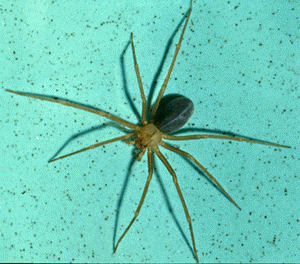 steroids (usually prednisone), and Dapsone. Shock treatment, hyperbaric oxygen therapy and nitroglycerine patches are used to promote healing.) Bites that receive treatment within the first 24 – 48 hours usually heal more rapidly and with fewer serious effects. Identification of Brown Recluse
Spiders
With some knowledge of spider anatomy
and a few specific characteristics of the
brown recluse, this species is relatively
easy to identify. All spiders have eight
legs and a body that is divided into two
main parts. The front part or
cephalothorax is the more flattened part
of the body and has the legs attached to
it. The abdomen is sac-like and attached
at the rear of the cephalothorax. The
eyes, long pedipalps, and the mouthparts
are on the front of the cephalothorax.
The brown recluse spider is a delicate-
looking, medium-sized spider. When adult its long, dark brown legs extend past an area
the size of a half-dollar. The body is three-eighths to one-half inch in length. One of the
easiest and best characteristics to use in identifying the brown recluse is the dark violin-
shaped mark on the upper side of the light brown or yellowish-brown cephalothorax. The
large end of the violin mark is at the head end of the cephalothorax, and the neck or stem
of the violin mark points toward the abdomen. Using magnification, the head region can
be seen to have six eyes instead of eight as in most spiders. It is also important to mote
that the brown recluse has a dark brown or charcoal-brown abdomen with no stripes or
spots. Young spiders usually have lighter coloration. A spider having all of the above
characteristics should be suspected of being the brown recluse and should be handled
with care. Positive identification can usually be made at a state public health office or
pest control company.
Distribution of the Brown Recluse
The brown recluse is commonly found in
Missouri, the southern half of Illinois,
Kentucky, the eastern two-thirds of
Kansas, Oklahoma, Tennessee, Texas,
Louisiana, Mississippi, and northwestern
Alabama. The spider also occurs in fewer
numbers in Nebraska, Iowa, Indiana, and
Ohio. Occasional specimens have been
found in California, Arizona, Wyoming,
Pennsylvania, New Jersey, North Carolina,
and Florida. These “strays” were probably
introduced accidentally by way of luggage or Rick Vetter, University of California Riverside
household furniture brought from the Midwest.
In the southern part of its distribution the brown recluse is often found outside under
rocks and beneath bark. In the northern states, this spider is commonly found in houses,
storage sheds, barns, and warehouses. Favorite hiding places are in seldom-used clothing
hanging in dark closets, in collections of magazines and papers, on the underside of
furniture, in cracks and spaces around baseboards, around window and door facings, and
in dark cellars. Documented cases indicate that most victims were bitten after they had
put on clothes that had been stored in a secluded closet, while they were cleaning closets
or storage areas, or when they rolled over on a spider in bed. Biting usually occurs when
a spider is pressed against bare skin.
Life Cycle
Recent studies of the biology of the brown recluse provide us with information pertinent
to control by the homeowner. In the laboratory, mating has been found to occur from
February to October. Greatest egg production occurs from May to August. One female
may produce as many as 300 eggs, depositing them in several cases throughout the
season. Each case is a white silken sphere about one-third inch in diameter, which the
spider leaves in a sheltered place. Only about 50% of the young can be expected to
survive. Depending on the availability of adequate food and mild temperatures, the young
reach maturity in seven to eight months. They may live for several years and, under some
conditions, can survive for six months or more without food and water.
The brown recluse is a hunter, emerging from its hiding place at night in search of small
insects for food. The small, loose, irregular web is not usually used for trapping insects.
Control of Spiders in their Illinois Habitat
In Illinois the buildings that are often infested with a large population of spiders are old
houses and warehouses in cities, old farmhouses, and poorly constructed dwellings that
have cracks and spaces through which spiders can enter for shelter. It is difficult to
control spider populations in old dwellings that have surrounding reservoirs such as old
storage buildings and barns.
The homeowner can do much to control these spiders by thorough, periodic
housecleaning. It is best to use a vacuum cleaner to clean storage rooms, closets, under
and behind furniture, and behind pictures and mirrors. All unnecessary articles should be
removed from attics, cellars, and closets. The removal of insects and other arthropods
from the house also aids in controlling the brown recluse because it depends on insects
and other related organisms for food.
In houses where spiders are abundant, chemical control may be necessary. In places with
little or no air circulation, such as closets and chests, DDVP resin strips or
paradichlorobenzene flakes or crystals are effective. Closets and other areas suspected of
sheltering spiders may be spot-treated with residual sprays of 2% Baygon, 0.5% diazinon,
0.5% dieldrin, or 3% malathion. Attics, crawl spaces, wall voids, and other unused areas
are best treated with 5% silica aerogel. It is best to consult specialist and take care in the
use of chemicals.
This Monmouth College project’s Website gives more information about the Brown
Recluse in northern Illinois.

FLU FAQs What is pandemic (H1N1) 2009 flu? Pandemic (H1N1) 2009 flu is a disease caused by the Influenza A (H1N1)v virus. This new virus subtype, which appeared recently and has the capacity to infect humans, contains swine, avian and human variants of the flu virus and presents a unique combination never observed before. Unlike the typical swine flu virus, this new virus is being tran