Caffeine is a member of the class of compounds organic chemists call alkaloids. Alkaloids are nitrogen- containing basic compounds that are found in plants. They usually taste bitter and often are physiologically active in humans. The names of some of these compounds are familiar to you even if the structures aren’t: nicotine, morphine, strychnine, and cocaine. The role or roles these compounds play in the life of the plants in which they are found is not well understood. In some cases they may act as pesticides; nicotine is found in tobacco and has been sprayed onto other plants, in which it is not found, to function as an insecticide. The structure of caffeine is shown to the right. It can be considered to be constructed from the purine ring system, which is important biologically, being found in starting in China. It is a beverage produced by steeping in freshly boiled water the young leaves and leaf buds of the tea plant, Camellia sinensis. Today, two principal varieties are used, the small-leaved China plant (C. sinensis sinensis) and the large-leaved Assam plant (C. sinensis assamica). Hybrids of these two varieties are also grown. The leaves may be fermented or left unfermented. Fermented teas are referred to as black tea, unfermented teas as green tea, and partially fermented teas as oolong. As trade routes opened to Asia in the 17th century, tea was imported to Europe.
Today, you are going to make a small but strong cup of tea and extract the Tea leaves consist mostly of cellulose, a water-insoluble polymer of glucose, which is a simple sugar (a monosaccharide). Cellulose performs a function in plants similar to that of fibrous proteins in animals: it is structure building material. Along with the cellulose are found a number of other things including caffeine, tannins (phenolic compounds, compounds that have an -OH directly bonded to an aromatic ring) and a The idea in this experiment is to extract the water soluble materials in the tea leaves into hot water. [The solubility of caffeine in water is 22 mg/ml at 25oC, 180 mg/ml at 80oC, and 670 mg/ml at 100oC.] The hot solution is allowed to cool and the caffeine is then extracted from the water with dichloromethane (methylene chloride), which is an organic solvent that is insoluble in water. Since caffeine is more soluble in dichloromethane (140 mg/ml) than it is in water (22 mg/ml), it readily dissolves in the dichloromethane. However, the tannins are slightly soluble in the dichloromethane. But we want to separate the caffeine from the tannins by having the caffeine dissolve in the dichloromethane and the tannins remain in the water. We can do this by taking advantage of the fact that phenols are acidic enough to be converted to their salts (deprotonation of the -OH group) by reaction with sodium carbonate. So, we will add sodium carbonate to the water and the tannins will be converted to phenolic anions, which are not soluble in the dichloromethane but are soluble in highly polar water. There is one practical disadvantage in converting the tannins to their salts – they become anionic surfactants. Detergents and soap are surfactants. It is the purpose of surfactants to cause materials that do not dissolve in water (like oil, grease and dichloromethane) to form an emulsion with water. We want to be able to separate the aqueous phase from the dichloromethane phase, so the last thing we want is an emulsion of the two. Consequently, as you extract the caffeine from the water into the dichloromethane do not shake the separatory funnel vigorously. The flow diagram below summarizes the extraction portion of the experiment. 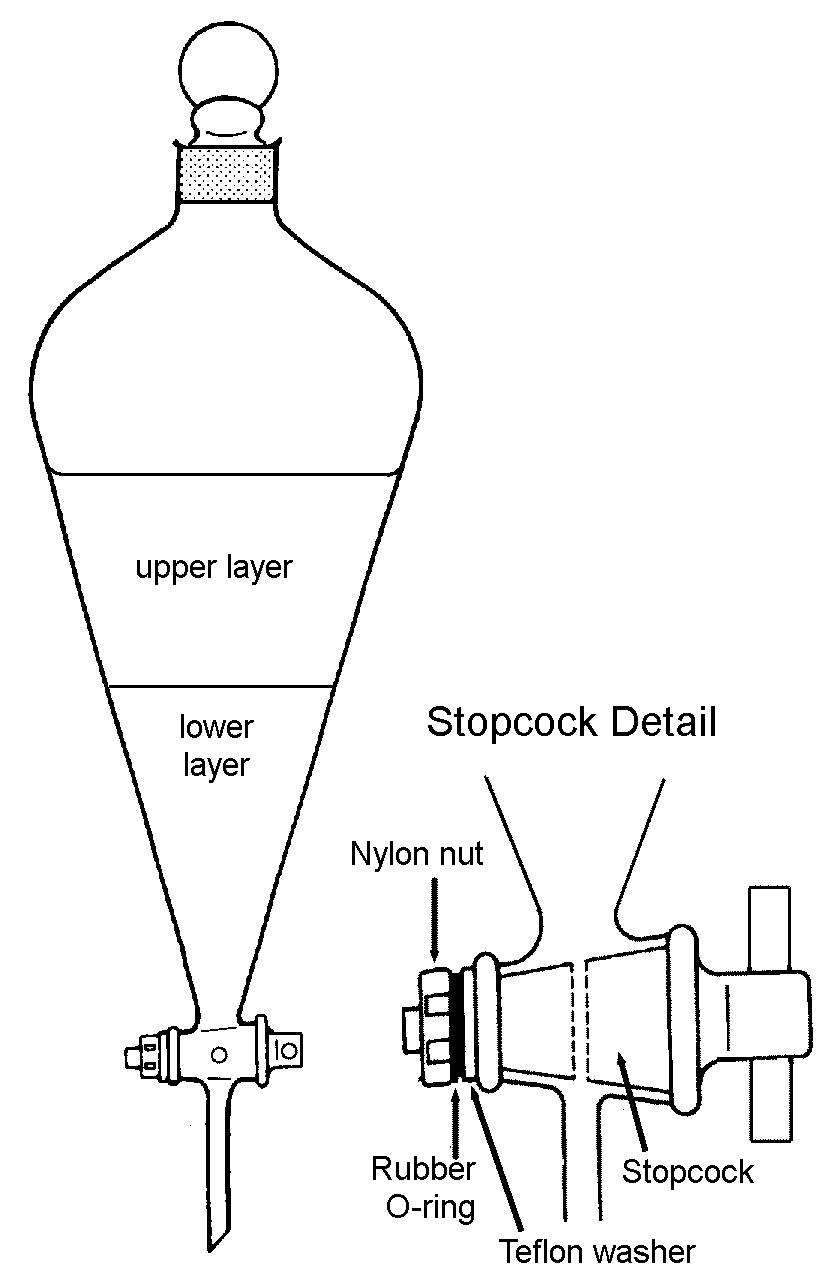 1. Open two tea bags by removing the staple, trying to not tear the paper. Weigh the total contents to the nearest milligram and record this weight. Place the tea back into the 2. Place the tea bags into the bottom of a clean, but not necessarily dry, 150 ml beaker. Add 30 ml of deionized water and 2.0 g of anhydrous sodium carbonate. Place the beaker on a wire gauze supported by a ring on a ring stand. Place a watch glass on top of the beaker. Gently boil the contents of the beaker for 10 minutes using a micro burner. If the tea bags rise out of the liquid push them down from time to time using a 3. Decant the hot liquid into a 50 ml Erlenmeyer flask. Add 20 ml of deionized water to the beaker and again bring the contents to a boil. Again decant the liquid in the beaker into the 50 ml Erlenmeyer flask. Press the tea bags with a clean cork to express as much liquid as possible without breaking the bag and transfer this liquid to the 50 ml Erlenmeyer flask also. Cool the tea extract to room temperature. Discard the tea bags.
4. Transfer the tea extract from the 50 ml funnel that is supported by a ring on a ring 5. Add 5 milliliters of dichloromethane to the separatory funnel. Stopper the funnel hand, holding the stopper into the neck of the funnel. With your other hand grasp the the plug in the barrel to open and close the stopcock. While holding the stopper tightly into the neck of the funnel, invert the funnel so the liquid no longer is in contact with stopcock to release any pressure that may have built up inside the funnel. Close the stopcock and agitate the material in the funnel without shaking it vigorously – you Agitate again as before and reclamp the separatory funnel to the ring stand.
6. Allow the contents of the separatory funnel to settle. There should be two distinct mostly clear layers. If there is an emulsion (cloudy) layer between two clear layers it is sometimes possible to break the emulsion by swirling the contents of the funnel or stirring the contents using a glass rod. If the emulsion persists seek your instructors help.
7. Carefully drain the lower (dichloromethane) layer into a 25 ml Erlenmeyer flask. Try to not include any of the aqueous (upper) layer. If there is a lot of emulsion, include it 8. Repeat steps 5 through 7 using a second 5 ml portion of dichloromethane. 9. Add 0.5 g of anhydrous sodium sulfate to the combined dichloromethane extracts in the 25 ml Erlenmeyer flask. Swirl the contents of the flask. The anhydrous sodium sulfate will absorb the small amount of water that is dissolved in the dichloromethane and small amounts of water from the aqueous layer that may have gotten into the flask by accident. [If you collected a substantial amount of emulsion in the Erlenmeyer flask, the sodium sulfate should help to “break” the emulsion. You may need to separate the aqueous material from the dichloromethane solution at this point. Seek your instuctor’s 10. Decant the liquid from the flask into a 25 ml beaker. Place one Boileezer into the beaker.
[Boileezer boiling chips or stones help to prevent bumping by allowing bubbles to form smoothly during boiling.] Place the beaker on a hot plate and Fritted when the volume of material in the beaker is between 3 and 5 ml start adding petroleum ether by disk means of a Pasteur pipet. When the solution in the beaker begins to get cloudy remove the beaker from the heat and allow it to cool at your bench. With luck, crystals of caffeine will form in the solution.
11. Set up the Hirsh funnel from the microkit as shown in the illustration to the right. Be sure to clamp the filter flask to a ring stand and to place a piece of filter paper in the funnel. Connect a rubber hose from the side-arm on the flask to the side-arm (NOT THE BOTTOM) of the aspirator. Turn on the aspirator. Pour the crystals and mother liquor from the beaker into the Hirsh funnel. If some crystals stick to the beaker, you can scrape them out with a spatula or wash them out with the mother liquor in the filter flask if you used a clean flask. Allow air to be drawn through the crystals for 10 minutes. Place the crystals in an unstoppered vial in your drawer.
12. Next time weight the crystals of caffeine and determine their melting point. The melting point reported in the literature is 238oC, so you can heat the Thiele tube rapidly at least up to 200oC. Do not exceed the 260oC limit of the thermometer. Hand your sample of caffeine in along with your report sheet.

Purim fun for everyone: recipes, crafts & tips for a great holiday

Purim Fun For Everyone : Recipes, Crafts & Tips for © Purimguide.com All Rights Reserved – Feel Free To Pass This Guide Along Purim Fun For Everyone Welcome our special report and thank you for your interest in Purim Made Easy: Everything You Need For A Fun Holiday. Purim is such a fun holiday, but it also one of the busiest! There is so much to prepare for this special day.