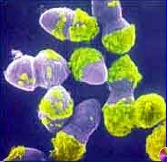 Homework Assignment 10: Due at the beginning of class 3/1/02 According to the Centers for Disease Control andPrevention1, every year approximately ninemillion people contract a serious bacterialinfection while in undergoing treatment in ahospital2. Every year there are approximately80,000 deaths in hospitals and nursing homes asa result of bacterial infections3.
The bacteria of the genus Enterococcus areleading cause of hospital-acquired infections (seeFigure 14). Bacteria such as faecium can cause serious infections of the blood, heart, urinary tract and central nervous system5. In previous decades, standard medical practice was to prescribe a powerful antibiotic (such as vancomycin, see Figure 26) to patients hospital-acquired infections. (Note that who had developed a serious bacterial infection.
the colors are false and were added digitally to enhance the detail in the However, in recent years7 many strains of dangerous bacteria have become resistant toantibiotics. Nowadays even the most potent antibiotic drugs are practically useless against the new strains of “super bugs” (such asEnterococus faecium) that infect patients in hospitals and nursing homes8. As Dr. LeonSmith of the St. Michael's Medical Center commented (somewhat anthropomorphically): “The bacteria are brilliant, absolutely brilliant. They can change. They know how to fightback. They were here billions of years ago before we were, and they will be here after weare gone.” In April of 2000, the FDA gave approval for use of an entirely new kind of syntheticantibiotic called oxazolidiones (see Figure 49). Oxazolidinones are the first new class ofsynthetic antibacterial agents introduced since the discovery of quinolones more 1 Source: http://www.cdc.gov2 Source: CNN. “FDA approves first in a long-awaited new class of antibiotics.” April 18, 2000.
3 Source: Centers for Disease Control and Prevention. http://www.cdc.gov4 Image source: http://www.lnl.gov/5 Source: M. Friedlander. (2000) “Single day effort reveals genes of dangerous enterococcus bacteria.”Science Beat, 2(3): 3.
6 Image source: http://www.lilly.se/produckter/vancocin/7 Due in part to rampant over-prescription of antibiotics by physicians. As physicians prescribed powerfulantibiotics on a widespread basis, the phenomena of artificial selection favored those mutant strains ofdangerous bacteria that were naturally resistant to the agents used in antibiotic drugs.
8 Source: CNN. “FDA approves first in a long-awaited new class of antibiotics.” April 18, 2000.
9 Image source: http://www.pubs.acs.org/

than 30 years ago10. The first of these new syntheticantibiotics was released in April of 2000 by thePharmacia Corporation under the trade-name ZyvoxTM(see Figure 311). In clinical trials 12, ZyvoxTM was able tosignificantly inhibit the growth of vancomycin-resistantstrains of Enterococcus f a e c i u m (in addition tosignificantly inhibiting the growth of other dangerous,antibiotic-resistant bacteria).
ZyvoxTM is available in both tablet (for oral dosage) andliquid (for intravenous injection) forms. For manydrugs, intravenous injection is the dosage method ofchoice in a hospital, as there are trained personnel Figure 2: The antibiotic drug Vancocin manufactured by present who can safely administer the drug. However, many patients prefer an oral dose as this does not Generally speaking, oral administration of a medicine is not as effective in delivering the drug to the patient as an intravenous injection. Some ofthe reasons for this include13: • The drug may be destroyed by stomach acid or digestive • The drug may combine with chemicals from food in the stomach (chelation) to form an insoluble compound thatcannot be absorbed into the blood stream.
• Some drug molecules are so polar (i.e. carry high electrical charges in certain parts of the molecule) thatthey cannot cross cellular membranes and thus cannotcross the stomach lining.
In this homework assignment, you will use the methods that clinical researchers employ to determine how much of a drug will be available to a patient who takes thedrug orally, as compared to a patient whotakes the drug via an intravenous injection.
This quantity is called the absolute oralbioavailability (or simply the bioavailability)of the drug.
Figure 4: Chemical structure of the active antibiotic ingredient of Zyvox. 10 Source: S. Katzman. (2001) “Targeted combichem for antibiotics.” Modern Drug Discovery, 4(8): 15.
11 Image source: http://www.zyvox.com/12 Source: ZYVOXTM Full Prescription Information Pamphlet, January 2002.
13 Source: http://www.usask.ca/medicine/pharmacology/Fri08SEP.pdf 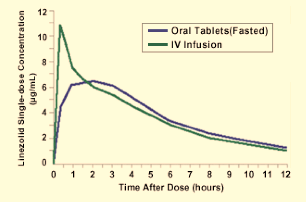 CLINICAL Treating actinic keratoses PRACTICE with imiquimod • There are many options for managing actinic Case study keratoses. Percentage complete clearance of lesions Anthony Dixon with cryotherapy is in the order of 80%, topical imiquimod 70% and 5 fluorouracil 50%.2–5• Some patients will find some of the options more tolerable tha

Is a once-daily human GLP-1 (Glucagon-Like Peptide-1) analogue approved for the treatment of type 2 diabetes in adults.1 Has 97% similar to the body’s own hormone (GLP-1). GLP-1 is a natural hormone in the body that plays a critical role in maintaining a healthy level of sugar in the blood. In type 2 diabetes, GLP-1 production and Lowers blood sugar levels by stimulating the