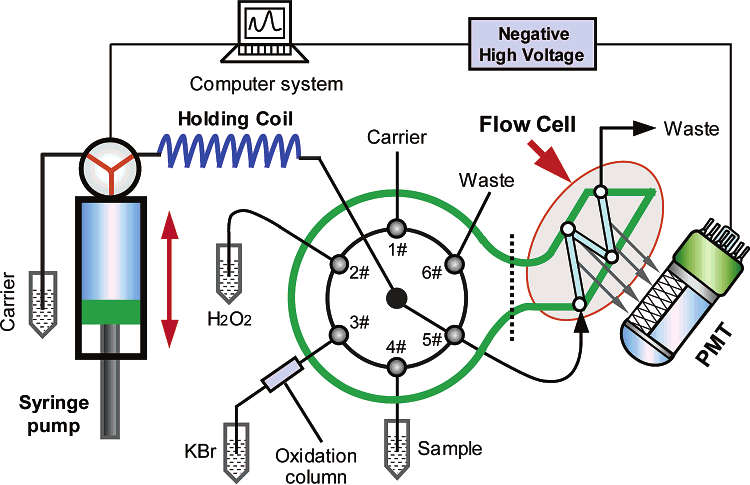 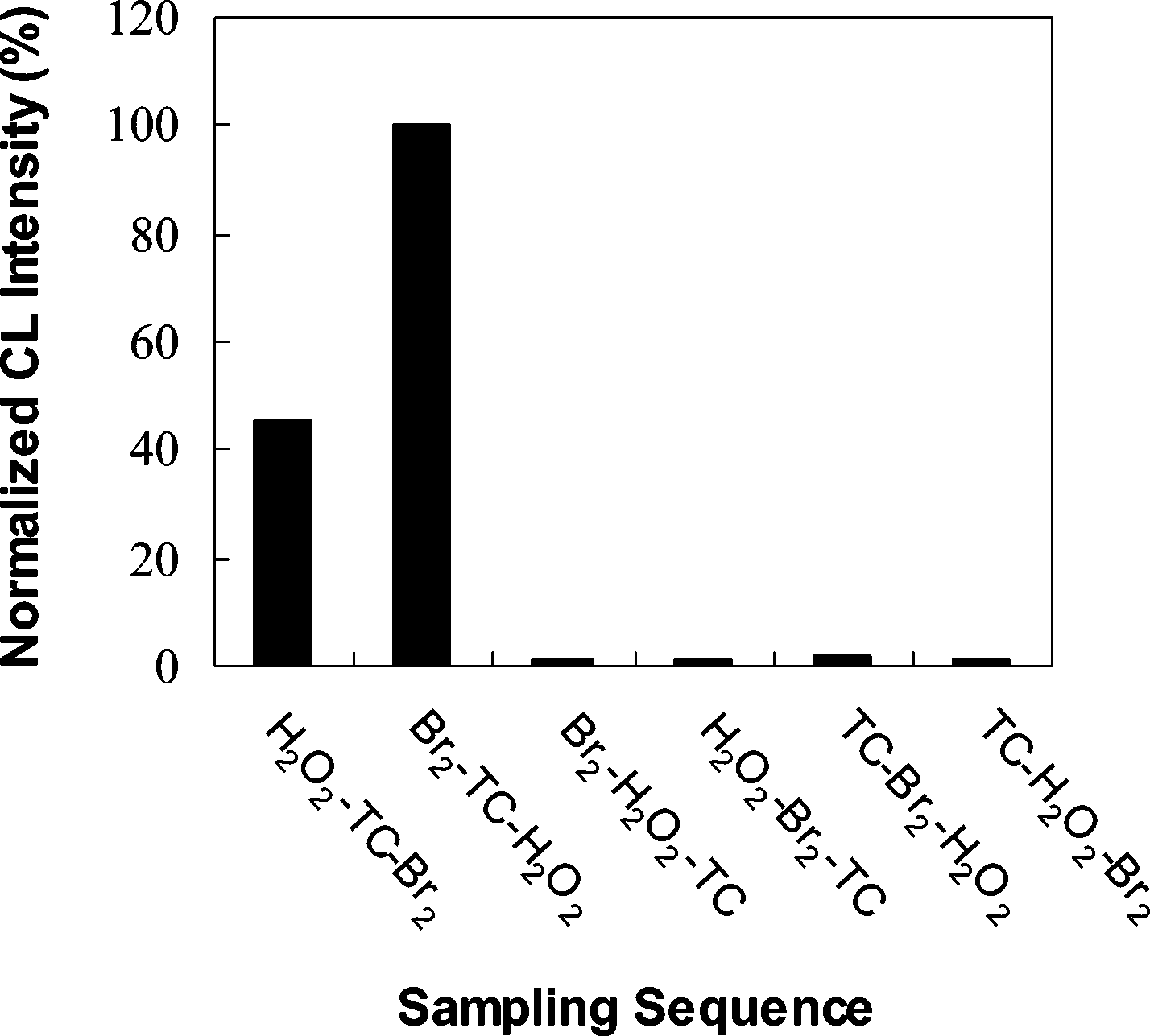 significantly the recorded CL signal. The experiments indicatedthat, when using a conventional spiral flow cell with channel innerdiameter of 0.5 cm instead of the Z-type flow cell, a thoroughmixing of the stacked zones occurred as they flow from a narrowchannel in the LOV into a wider one. Thus, a 15-20-fold higherblank signal was recorded attributed to the reaction of nascentbromine and hydrogen peroxide. Consequently, a deteriorationof the signal/noise ratio was observed. It is conceivable that theblank signal should be lower if a spiral flow cell of smaller diameterwere used. Actually, this was well demonstrated by the Z-typeconfiguration of the flow cell. The present Z-type flow cell wasdesigned to fit the receiving area of the light entrance window ofthe PMT, which provides sufficient CL detection area by incor-porating the Z-channel onto an appropriate planar area and, Figure 2. Effects of sampling sequences on the recorded CL.
therefore, facilitates a complete collection of the light emission.
Conditions: KBr concentration in 0.02 mol L-1 H2SO4, 0.05 mol L-1; As compared with the single-purposed spiral cell for CL detection, H2O2 concentration in 0.01 mol L-1 NaOH:, 0.01 mol L-1; sampling the multipurposes of the Z flow cell are characterized by the vast (aspirating) sequence, Br2 sample-H2O2; volumes of KBr-sample-H2O2 solutions (µL), 15-50-50; aspirating flow rates for KBr- potentials and versatilities in its compatibility with a variety of sample-H2O2 solutions (µL s-1), 20-50-50; negative high voltage detection modes, i.e., spectrophotometry, laser-induced fluores- cence, electrochemistry, and chemiluminescence. In addition,Z-type channels are much easier to be fabricated mechanically,while the fabrication of spiral channels into the monolithic LOV silica surface; there is thus a risk of losing particulate NaBiO3 system poses a real challenge, unless microfabrication techniques during the oxidation process. As a compromise, a mass ratio of 1:5 was employed for the immobilization process, yielding both a In Situ Generation of Nascent Bromine and the Perfor-
satisfactory oxidizing efficiency and an adequate lifetime of 300- mance of the Immobilized Bismuthate Column. The overall
performance of the entire system depends strongly on the NaBiO3 has very strong oxidizing ability in acidic medium. To concentration of the nascent bromine. Therefore, a high oxidation maintain the oxidizing capability and the stability of the packed column, an appropriate acid should be employed. The experiments oxidation rate is highly desired. It is ideal that quantitative indicated that HCl and HNO3 destruct the packed column and oxidation is accomplished while the KBr solution was aspirated therefore were not a choice. When using H3PO4 and H2SO4, a to flow through the column reactor. The oxidation kinetics was higher response and a longer lifetime of the column were therefore investigated by varying the contact time of KBr solution achieved. For the ensuing experiments, H2SO4 was employed.
(15 µL) with the oxidizing surface, which was realized by changing Further investigations showed that an improvement on the the flow rate for aspirating the KBr solution through the column.
recorded CL intensity was observed with the increase of H2SO4 A complete oxidation of KBr in a 0.05-0.30 mol L-1 solution was concentration in KBr solution up to 0.02 mol L-1, while afterward, achieved within 1 s, by aspirating 15 µL of solution to flow through a decline of the signal was recorded. This might be attributed to the column reactor at a flow rate of 5-25 µL s-1. When employing the fact that the present CL reaction is preferentially performed KBr solution within this concentration range and the optimized in alkaline medium, while a higher concentration of acid tends to experimental conditions as detailed in the ensuing sections, a dilute the concentration of NaOH in the adjacent H2O2 zone, which virtually constant CL intensity was recorded. This result denotes in turn deteriorates the CL reaction. For further experiments, a that a KBr concentration of 0.05 mol L-1 with an aspirating flow H2SO4 concentration of 0.02 mol L-1 was employed.
rate of 20 µL s-1 is adequate for the ensuing CL reaction for the Effect of Sampling Sequence. For the present SI-LOV CL
reaction system, the penetration and dispersion of the stacked When using a fixed amount of NaBiO3 immobilized silica for zones, i.e., Br2 in H2SO4, H2O2 in NaOH, and tetracycline (sample), packing the column reactor, no variations for the oxidation is the decisive factor on the CL emission. Therefore, the effect of efficiency were observed by varying the length and diameter of sampling sequence of the various zones and their concentrations the packed column. Thus, for the ensuing experiments, ∼100 mg and volumes were carefully optimized.
of NaBiO3 immobilized silica beads was employed to pack the Figure 2 illustrated the effect of sampling sequence of the three column into a PTFE tubing of 2.0-mm inner diameter.
zones. It is obvious that a very weak emission was detected The immobilized amount of NaBiO3, which is directly related whenever the Br2 and H2O2 zones were directly adjacent, while to the amount of NaBiO3 used for immobilization, has a significant significant emissions were recorded in the cases where the Br2 effect on the oxidizing efficiency and the lifetime of the column.
and H2O2 zones were separated by the sample zone. It is When a NaBiO3/silica mass ratio of 1:10 (m/m) was adopted, the interesting that the highest CL intensity was always achieved by lifetime of the packed column is only ∼100 operating cycles for adopting the sampling (aspirating) sequence of Br - 15 µL of KBr solution. Although the oxidizing efficiency and sample-Br2. This observation could be satis- lifetime of the column were significantly improved with a mass factorily explained by the following energy-transfer mechanism ratio of 1:1, the NaBiO3 was not uniformly immobilized on the Analytical Chemistry, Vol. 78, No. 16, August 15, 2006 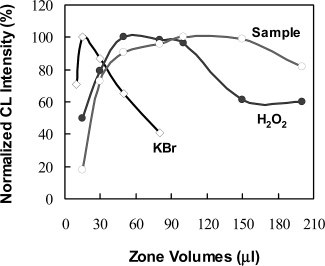