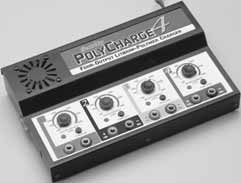 INSTRUCTIONS
• Each output has a built-in 3 hour safety timer INTRODUCTION
• Tri-color LED and audible indicators for each output indicates charge status, as well as for improper input Thank you for purchasing the PolyCharge4 lithium-polymer voltage, output reverse polarity, open-circuit, and more charger! Capable of charging 4 separate lithium-polymer packs • Built-in fan keeps charger cool for efficient operation and simultaneously, the PolyCharge4 charger is specially designed for today’s electric flight modeler. Adjustable capacities from 300 • Rugged metal case for durability.
to 3000mAh, tri-color LED indicators and ease of use make this • Reverse polarity and current overload protection on input a must-have item! Audio sound cues indicate charge completion and errors, while each individual port’s status can be read at a glance by the LED. Do NOT attempt to use this charger with
NiCd, NiMH or Lithium-Ion batteries as they are not
IMPORTANT PRECAUTIONS
compatible! Please read this entire manual to learn about
specific functions and features as well as safety
information. Damage resulting from misuse or modification
• Charge ONLY lithium-polymer rechargeable batteries. Do
of this charger will void your warranty.
not attempt to charge other types of rechargeablebatteries—including different types of lithium batteries—aspermanent damage to the battery, charger and surrounding SPECIFICATIONS
• NEVER leave the charger unattended while in use!!
Input Voltage: 12.0 - 15.0V DC
• IMMEDIATELY disconnect the battery from the charger
Number of Outputs: Four
if it begins to swell, emits smoke, or is warm to the
Specifications for EACH Output:
touch! Place warm or hot batteries in a fire-safe location,
Battery Types: Lithium-Polymer Only
such as a container made of metal (such as an empty Number Cells: 1 to 4 Cells (3.7-14.8V)
ammunition box) or ceramic. Always monitor the area with Charge Control: Pushbutton Start
a smoke or fire alarm, and have an “ABC type” fire Fast Charge Termination: Constant Current/
extinguisher available at all times.
• DO NOT set the battery capacity dial to a value greater than
Max. Cell Capacity: 300mAh to 3000mAh
the battery’s 1C value as permanent damage could result.
Charge Current: 300mA to 3.0A
• DO NOT allow LiPo cells to overheat at any time! Cells
Safety Timer: 3 Hours Maximum Charge Time
which reach greater than 140 degrees Fahrenheit (60°C) Output Connectors: Banana Jacks
can and USUALLY WILL become damaged physically and Status Indicators: Tri-Colored LED and
could possibly catch FIRE!! Always inspect a battery which
has previously overheated for potential damage, and do not Input Connectors: Alligator Clips
re-use if you suspect it has been damaged in any way.
Fuse: 20A Replaceable Spade Fuse
• ALWAYS provide adequate ventilation around Li-Po batteries
during charge, discharge, while in use, and during storage. If Case Size: 8.19"x1.50"x4.96" (208x38x126mm)
a battery becomes overheated, remove it from the charger Weight: 21.8 oz. (617g)
IMMEDIATELY and place it in a fire-proof location until it cools.
• Use a charge lead that is directly compatible with the “charge” connector on the Li-Po battery. It is strongly SPECIAL FEATURES
recommended to use pre-assembled charge leads which canbe found at most hobby retailers. Great Planes’ 2-Pin/Banana • Four independent outputs—like having four chargers in one! Plug Charge Adapter (GPMM3105) is directly compatible • Charge up to four 4-cell LiPo packs simultaneously with ElectriFly Li-Po battery charge leads, having banana • Input voltage boost circuitry to handle 3 and 4-cell packs plugs on the opposite end for connection to the charger.
• Do not use automotive type chargers to power charger.
• Set the battery capacity on each output with an adjustment • Do not allow water, moisture or foreign objects to enter • Charge current sets automatically, based on battery mAh • Do not block the air intake holes or fan, which could cause • Automatically detects the number of cells on each output— • Do not attempt to charge packs containing more than 4 • Always disconnect the charger from the input power source • Uses the constant-current/constant-voltage charge 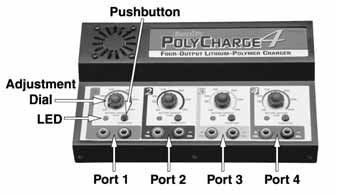