Fluoxetine, also known as Prozac, is a widely marketed selective serotonin reuptake inhibitor, used to fight depression and anxiety. Recently, it has been observed that high levels of this pharmaceutical have been found in water sources prone to contamination. This is a concern for environmental reasons because of the negative effects that it can have on aquatic organisms, including fertility and reproductive problems. In further studies, it has been found that fluoxetine reacts in light, breaking down into various molecules via direct and indirect photolysis, with a half life of 55.2 ± 3.6 hours.7 It was my goal in this study to investigate whether fluoxetine would indeed break down. High performance liquid chromatography and mass spectrometry were used to determine a half life of 66.896 hours in East Gemini Lake water, compared to much higher half lives in buffered solutions. This was evidence that fluoxetine broke down via indirect and/or direct photodecomposition versus simply just direct photodecomposition. Additionally, trials were run in isopropyl alcohol and DABCO to find a mechanism by means of hydroxyl radical or singlet oxygen, respectively.
Introduction

Fluoxetine, also known as Prozac, is categorized as a selective serotonin reuptake inhibitor (SSRI) with the chemical structure seen in Figure 1. SSRIs selectively inhibit the reuptake of serotonin at the presynaptic neuronal membrane. This could be a result of fluoxetine’s electron withdrawing effect and its lipophilicity. Fluoxetine is used primarily in the treatment of depression and obsessive compulsive disorder. Figure 1: Fluoxetine or N-methyl-8-[4-(trifluoromethyl) phenoxy] benzene propanamine When fluoxetine is metabolized in the body via demethylation, norfluoxetine is formed, which may contribute to the long duration of the action of fluoxetine in the body.

Findings indicate that 2.5% of the metabolites analyzed in excreted urine were fluoxetine and 10% norfluoxetine.12 Because this metabolization takes place, as seen in Figure 3, both structures need to be taken into consideration when analyzing for environmental Figure 3: Fluoxetine and its demethylized metabolite, norfluoxetine 12 There have been very few studies done on the environmental effects of non- steroidal pharmaceuticals, much less anti-depressants. One study done on the toxicity of fluoxetine on select organisms, including aquatic biota such as Ceriodaphnia dubia, Daphnia magna, and Pimephales promelas was conducted. In these experiments, organisms were treated with fluoxetine treatments at various concentrations. Cell deformities occurred, especially seen in algae. Cells appeared shriveled and frequently were not crescent shaped, a normal characteristic of the particular cell being observed. 1 Results also showed that this exposure resulted in fertility problems. In fish, serotonin stimulates the release of gonadotropin in some species, which stimulates sex steroid synthesis and controls the development of oogenesis, including vitellogenesis.1 Other studies have verified that anti-depressants have been found to have the same effect on fish that they do people, they cause aquatic life to be more relaxed. This would suggest that smaller fish would become easier prey for larger fish. This also suggests that if concentrations of drugs, and in particular fluoxetine, are high enough they could cause In this study, the goal was to see if fluoxetine would break down in water with the understanding that it is present currently in many bodies of water throughout the United States as well as Canada. Previous studies indicated that fluoxetine broke down in sunlit water, resulting in a half life of 55.2 ± 3.6 hours7. Finding out whether fluoxetine decomposed via direct and indirect photolysis was the primary goal. Direct photolysis is when a compound absorbs light, becomes unstable, and decomposes. Indirect photolysis occurs when a reactive intermediate is generated by another light absorbing material and then causes a compound to decompose. Using this information, the objective was to find a half life of fluoxetine and if possible, a mechanism for decomposition.
Experimental
A 10 mM solution of fluoxetine·HCl from the National Science Foundation was prepared using E.Pure water and 3 mL acetonitrile to dissolve. Formate, acetate and ethanolamine buffers were prepared at pH 3, 5 and 9, respectively again using E.Pure water. East Gemini Lake (EGL) water was filtered using 0.45 µm filter paper. Solutions were also made of 100 µM fluoxetine in an ethanolamine buffer of pH 8.5, EGL water, EGL water with isopropyl alcohol (IPA) at a concentration of 10-2 M and EGL water with DABCO (1,4-Diazabicyclo[2.2.2]-octane) at a concentration of 10-3 M. Duplicate samples of 100 µM fluoxetine in the respective pH 3, 5, 9 and EGL lake water were prepared and put into quartz test tubes. Similar samples were wrapped in aluminum foil to serve as controls for the experiment. The photoreacter was comprised of a 450 W UV immersion lamp from Ace Glass Incorporated surrounded by quartz immersion lamp well that continuously had cold water running through it. The samples were run around the lamp powered by a generator. A diagram of this setup can be seen in Figure 4. Aliquots of 750 µL were taken from the test tubes at various time intervals for Samples were run under the previous conditions; however the solutions of 100 µM fluoxetine were in the ethanolamine buffer of pH 8.5, EGL water, EGL water with isopropyl alcohol and EGL water with DABCO at concentrations previously specified. Controls of the same nature were also provided. 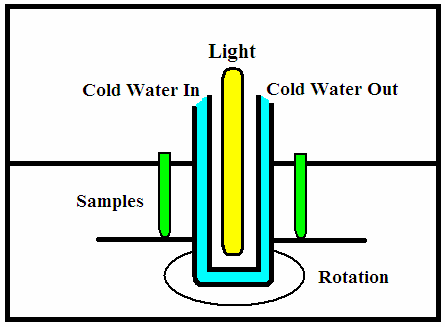