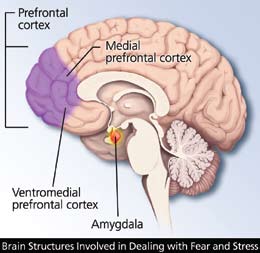 b r i e f i n g s
Brain Briefings Explain How REcEnt advancEs in Basic nEuRosciEncE REsEaRcH aRE lEading to clinical applications Post-traumatic
stress DisorDer
With a new generation of U.S. soldiers coming home after prolonged exposure to combat-related stress or trauma, understanding and treating post-traumatic stress disorder (PTSD) has taken on an increased sense of urgency. One large study found that almost 20 percent of returning military personnel who served in Iraq or Afghanistan report symptoms of PTSD or major depression. But soldiers aren’t the only Americans at risk for this debilitating neuropsychiatric disorder. According to the National Institute of Mental  Patients with PtsD have heighteneD levels of
Health, about 3.5 percent of American adults (7.7 norePinePhrine, a chemical involveD in arousal
million individuals) struggle with PTSD during anD stress. high levels of this chemical strengthen
the emotional reactions of the amygDala, a
Unfortunately, current drug and behavioral brain region involveD in the fear resPonse,
while weakening the rational functions of the
treatments for PTSD are often unable to reduce Prefrontal cortex, which normally allows us
or eliminate symptoms that include intrusive to suPPress troubling memories anD thoughts.
memories, emotional numbness, and insomnia. research shows that a Drug calleD D-cycloserine,
In recent years, however, scientists have begun to when useD in combination with behavioral theraPy,
piece together some of the neurobiological puzzles aPPears to enhance the fear extinction Process.
behind this complex disorder, offering new hope to its sufferers. Such research is leading to: The identity of the genes involved in PTSD ∫ Greater knowledge of how psychological trauma susceptibility remains a mystery, although alters brain structure and function.
one likely candidate is a gene called FKBP5. ∫ A deeper understanding of who is susceptible The protein produced by this gene helps stress hormones bind with their receptors on brain ∫ More effective treatments for PTSD and related cells and, thus, helps regulate the brain’s response mental health disorders, such as depression and to stress. A study of adults who experienced childhood abuse found that those with certain One of the major unanswered questions about genetic variations in this stress-related gene PTSD involves susceptibility. Not everybody were significantly more likely to have PTSD who experiences psychological and/or physical symptoms than adults who were abused but trauma develops the disorder. Research now suggests that at least some of the risk for PTSD is Children may inherit some PTSD risk factors genetic—perhaps as much as 40 percent, according from their parents. For example, the infant to a multigenerational study of survivors of a children of mothers who contracted the disorder devastating 1988 Armenian earthquake.
after directly experiencing the September 11, neuroscience
2001, World Trade Center attacks were found a brain region involved in the fear response, can core concePt
to have lower-than-average levels of the stress become hyperactive in PTSD combat veterans in hormone cortisol circulating in their bodies, a some conditions. This finding may explain why factor associated with PTSD. The adult children of people with PTSD have an inability to learn how mothers who developed PTSD after surviving the to forget the intense emotions that accompanied Learn more
their initial trauma. Scientists have identified Many years ago, scientists noticed that people certain clusters of amygdala cells—known as with PTSD tended to have a smaller-than-average intercalated neurons—that appear to be essential hippocampus, an area of the brain involved with to this forgetting. Drugs that target these cells memory. For example, some Vietnam War combat veterans with PTSD have smaller hippocampi One such promising drug is D-cycloserine, than veterans without the symptoms. Is a change an antibiotic that is also used experimentally to in hippocampal size brought about by stress or treat fear of heights. When used in combination more information
a preexisting risk factor? A recent study revealed with behavioral therapy, D-cycloserine appears to that both Vietnam veterans with PTSD and their enhance the fear extinction process. Another drug, non-combat identical twin brothers had small the beta-blocker propranolol, has shown some hippocampi. But only the PTSD veterans exhibited evidence of being able to prevent the development Past issues
changes in another brain area (the rostral anterior of certain PTSD features when administered cingulate cortex) active in inhibiting the fear response. This finding shows how hereditary Traumatic stress cannot always be avoided. But factors and experience (the stress of a traumatic research is pointing to new and more effective ways event) share in the development of PTSD.
of helping individuals successfully prevent or break copyrigHt 2009 society for NeuroscieNce Other research has found that the amygdala, the disabling cycle of recurring PTSD symptoms.
nonProfit org.
us Postage PaiD
Permit no. 161
harrisonburg, Va
Post-traumatic stress DisorDer